These Cut-Resistant Kevlar Sleeves Are Like Modern-Day Chain Mail 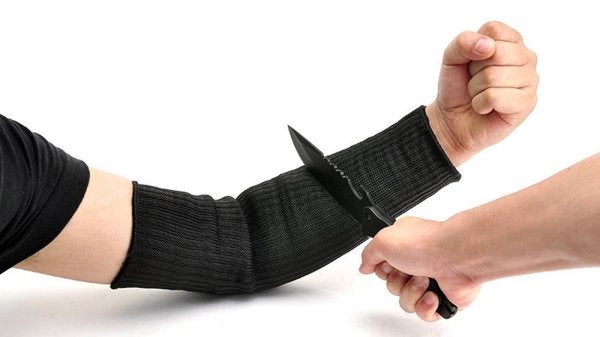 Anyone who’s served in the military since the Personnel Armor System for Ground Troops was introduced in 1985 knows the value of Kevlar. While the Lightweight Helmet and Advanced Combat Helmet have slowly come to replace the drab olive gear that came to define American troops at the end of the Cold War, the PASGT virtually made Kevlar synonymous with tough, lightweight armor that can take a beating in even the worst situations.

It’s that durability that makes Kevlar the ideal choice for adventures off the battlefield as well. It doesn’t matter if you’re camping or hiking, dirt-biking or mountain-climbing, or even just doing some work around the house: cut-resistant sleeves are a fine investment for a man who works hard with his hands. Or, you know, a man who plans on fighting off a band of thugs in the middle of the night.

While Amazon is rife with options when it comes to protective sleeves of tried-and-true Dupont Kevlar (our friends at HiConsumption recommend this bright yellow pair for reasons we can’t fully explain), we recommend going right to the manufacturer — start with Wells Lamont, which sells a dozen for just over $120 — to ensure that these things have the American National Standards Institute Cut Level you’re looking for. After all, it could be the difference between life or death — or at least a serious cut.