The Marine Corps Is Eyeing Some Brand New Boot Upgrades

It looks like Marines are about to get some fancy new footwear. The U.S. Marine Corps hasn’t just entered the... 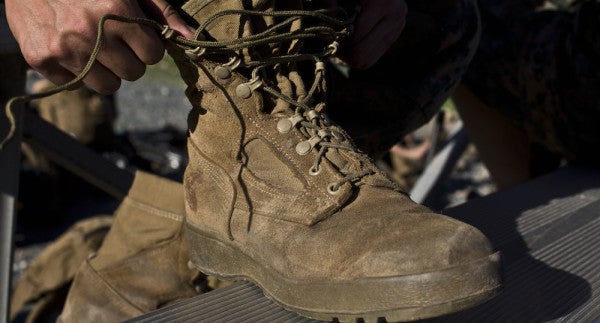 It looks like Marines are about to get some fancy new footwear. The U.S. Marine Corps hasn’t just entered the final phase of testing designs for new standard-issue jungle boots; Commandant Gen. Robert Neller is eyeing new combat boots for the first time in more than a decade.

Neller plans to give the Corps a wide array of boot options and endorse new manufacturers to sell Marine-approved boots, reported Marine Corps Times. As operations in the Middle East wind down, Marine Corps Systems Command is planning to develop a formal requirement for a full tropical uniform as Marines turn their attention to the jungles of the Pacific

Starting in June, more than 400 service members from 3rd Marines will try out the Marine Corps’ new jungle boot for several months in its third and final test before fielding. Manufacturers Danner, Bates, Altama, and Rocky have each produced a jungle boot, and all will be competing for to be the Marine Corps’ contract in this trial phase.

Marine Corps officials plan on selecting a design by January 2018.

As for updating the Corps’ well-worn combat boot, Neller “has asked the program office to … take the Marine combat boot that is in the seabag now and make that a better boot,” Todd Towles, program officer for the clothing team at Marine Corps Systems Command told Military Times.

Since 2002, Marines have felt the standard issue boot was too heavy, and the Corps hopes to replace it with a lighter fit that boasts a repairable outsole and dries quicker than other footwear. Though there is no formal plan yet, the Corps hopes to test a combat boot option with new recruits later this year.

The service is looking at a 6-inch boot or a 10-inch boot, according to Towles. And after the Corps chooses a design, it will put out a request for manufacturers that want produce it.

“We want to design our specs and have it be Marine Corps owned,” Towles said.

However the Corps chooses to purchase its boots, it’s certain that Marines will need to make room in their closets for new shoes.