The Marines’ New Heavy-Lift Helicopter May Be Worth Every Penny

The Marine Corps drew criticism this week over the costs of a program for its new heavy-lift helicopter, the CH-53K... 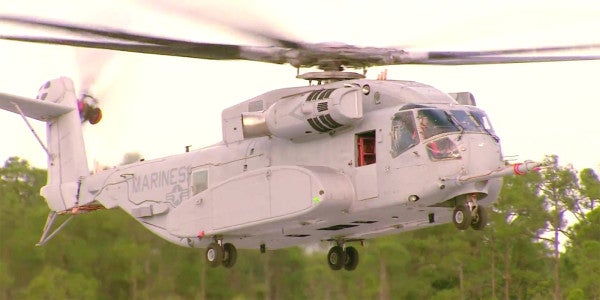 The Marine Corps drew criticism this week over the costs of a program for its new heavy-lift helicopter, the CH-53K King Stallion, amid reports that the rotary-wing platform will have a unit cost of $122 million per unit — 20% higher than previous projections.

But what’s happening is that a necessary and frankly worthwhile program is being inaccurately chastised, to the detriment of a worthwhile upgrade of a combat-proven asset for the Marines.

“The Marines Have a New Helicopter — and It Costs as Much as an F-35,” the Fiscal Timesdeclared in in a March 21 headline. Comparing the costs of the new CH-53 to the F-35 involves some monkey math, though.

At its highest, the F-35B cost well over $200 million per unit. But production has ramped up, bringing costs down; the current per-unit cost of the F-35B — while still a whopping $122.8 million — has never been lower.

Similarly, by the time the CH-53K enters full production, the helo’s per-unit cost should dip below $89 million, Marine Lt. Gen. Gary Thomas, deputy commandant for programs and resources, said earlier this month, ultimately making any comparison between the two systems unfair and inaccurate.

But most importantly, we need to talk about the program’s need and effectiveness. When I was in Afghanistan from 2011 to 2012, the CH-53 was so critical to combat operations it was the only squadron the Marine Corps kept two iterations of. The 2nd Marine Aircraft Wing (Forward) had a CH-53E Super Stallion squadron and a CH-53D Sea Stallion squadron. But both versions of the aircraft were decades old, but were incredibly busy across the theater of operations. Those platforms desperately need to be upgraded.

The new CH-53K King Stallion certainly seems to be an excellent iterative development of this combat-tested and combat proven platform. The new helicopter can hoist an external payload of more than 27,000 pounds, more than triple what the CH-53E could do. The old version, the CH-53E, was just barely too thin to hold a Humvee in its fuselage, the new helicopter can hold a Humvee.

It’s a critical platform for projecting power for the U.S. Marines. It can carry dozens of troops, gear, supplies, even other aircraft in austere environments, including launching from ships. There’s a lot of hay being made about the CH-53K becoming the U.S. military’s most expensive helicopter. Shouldn’t the largest and most technologically advanced helicopter in the U.S. military arsenal also be the most expensive?