The Marines’ Door-Breaching Shotgun Just Got An Upgrade 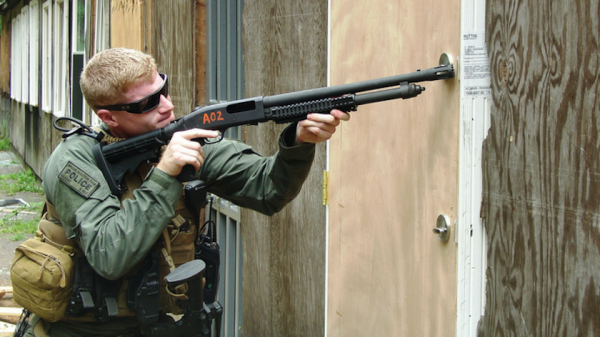 The Marines are on YouTube bragging about their new door-breaching shotgun. The typical door-breaching shotgun has been upgraded with a shorter barrel that is vented and has a saw-tooth edge. They’re calling it the Military Enhancement Kit. The kit augments the M500A2 pump-action shotguns, which are currently used by reconnaissance, security force, military police, explosive ordnance disposal and special operations Marine units.

What’s more, the augmented M500A2 has a customizable stock that can be a really short buttstock, or a pistol grip reminiscent of old-school gangster sawed-off shotguns. The reason, the video explains, is that when Marines are carrying a lot of gear, including a primary weapon and the accompanying ammunition, they don’t want to be lugging around an extra long gun, such as a full-length shotgun. Having a pistol gripped shotgun, especially one with such a finite mission as breaching doors, works perfectly.

“When you’re breaching or conducting methods of entry, having the ability to secure the weapon on your body without it becoming cumbersome is important,” said Gunnery Sgt. Michael Flor, ballistic breaching course chief and senior instructor at the Methods of Entry School. “Having a shorter barrel and a pistol grip removes all of the extra space that is not necessary for ballistic breaching. So when you stow it, you can stow it much more rapidly.”

Indeed, what makes the shotgun so popular is that it is so customizable, as the new Military Enhancement Kit illustrates. It’s basically the shotgun version of an M16, in that regard.

Watch the video of the new M500A2 in action below, courtesy of Marine Corps Systems Command: