Is It Time For The US Navy To Get Out Of The Supercarrier Business?

Capt. John Sidney McCain III, U.S. Navy (retired), has flown on and off a lot of carrier decks. And he... 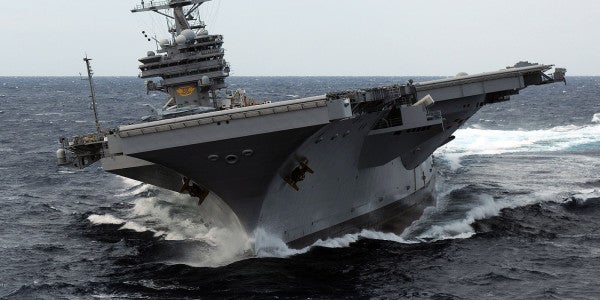 Capt. John Sidney McCain III, U.S. Navy (retired), has flown on and off a lot of carrier decks. And he thinks they're getting too damn big.

McCain — the longtime Republican senator from Arizona and chairman of the Senate Armed Service Committee — wants the sea service to build smaller, lighter CVNs. The Navy should “pursue a new 'high/low mix' in its aircraft carrier fleet,” he declared in a January white paper.

As it turns out, McCain might get his way: The Senate's planned 2018 defense budget pauses spending on a third Ford-class supercarrier and instead calls for “$30 million for the Navy for a preliminary design effort to create a light carrier for the service,” according to U.S. Naval Institute News.

What gives? Even after the flap about its newfangled catapults and President Donald Trump's preference for “goddamned steam,” the fancy, futuristic Ford class has been the pride of the service. And now some of Congress's biggest military hawks want to scale the program back in favor of more, smaller carriers?

The big problem, as Popular Mechanics' Kyle Mizokami points out, is that Ford carriers are expensive ashell, even by DoD standards. “The only supercarrier built in the last decade, USS Gerald R. Ford, is two years behind schedule, cost nearly $13 billion, was 22 percent over budget, and incurred $4.7 billion in research and development costs,” Mizokami writes; the second entry in the ship line, the upcoming USS John F. Kennedy, is projected to be only incrementally cheaper. Some analysts have also said that cost isn't worth the flattops' vulnerability to a whole host of new standoff weapons, like ballistic missiles, guided cruise missiles, and “super-cavitating” torpedoes.

The answer, McCain says, is to toss the carrier fleet's “day-to-day missions, such as power projection, sea lane control, close air support, or counterterrorism” to “a smaller, lower cost, conventionally powered aircraft carrier.” In that January white paper, the senator challenged the Navy to deliver a light carrier platform by “the mid-2030s.”

If that idea of a “high-low” mix of naval platforms sounds familiar, it's because it comes from McCain's old Navy days, in the 1970s. The chief of naval operations at the time, Adm. Elmo Zumwalt, sought to balance big sub and carrier purchases with large quantities of smaller escort ships that could screen out threats to the carrier group. The result was the abundant Oliver Hazard Perry class of guided missile frigates, the last of which left active service just two years ago. (And not for nothing, but the Navy has discussed bringing some of those tin cans back off their mothballs in recent months.)

Lighter carriers, too, have a history in the service, Mizokami points out — as the U.S. pumped out new nuclear-powered Nimitz flattops in the 1970s and 80s, it continued to rely on smaller, conventional carriers of a World War II vintage for power projection — think USS Midway and Coral Sea, among others.

On the plus side, the Marine Corps' and Navy's F-35B and C fighter-jet variants have vertical- and short-takeoff capabilities, which could make smaller carrier decks feasible. But the services have to figure out how not to starve those F-35 pilots of breathable oxygen before drawing up a new billion-dollar-busting delivery ship.

So how realistic is this small-batch artisanal aircraft carrier plan? Who knows? McCain is a man who knows how to push a defense program through Congress, and his plan starts small.But shipbuilders are already working on more Burke destroyers, Virginia submarines, and Ford carriers, and the Navy's long-term planners are dealing with active ops from Syria to Southwest Asia.

To get a new platform in the mix is hard in the most peaceful of times. To do it when everyone's this busy may be, as they say in the sea service, a stern chase.