The Navy’s much-hyped electromagnetic railgun has come a long way. Ever since the futuristic cannon enjoyed a public debut at... 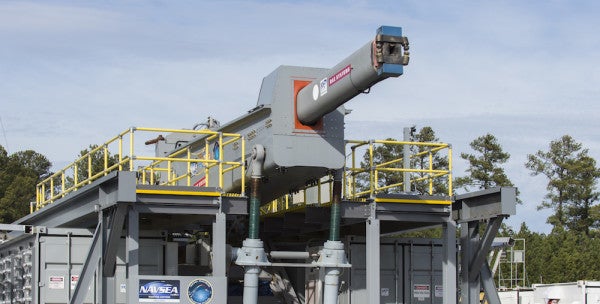 The Navy’s much-hyped electromagnetic railgun has come a long way. Ever since the futuristic cannon enjoyed a public debut at the Naval Surface Warfare Center, Dahlgren Division in Virginia in November 2016, the Office of Naval Research has been working diligently alongside defense contractors to bring the decade-long program closer to battlefield effectiveness. Based on new video published by the Department of Defense, the railgun has successfully moved from single-shot to repeated firing rate operations — a major stepping stone on the path to the battlefield.

The ONR video shows the railgun conducting its first multi-shot salvos powered by repeated pulses in energy over a short period with minimal cooldown time, a critical system for efficient applications downrage. While the prototype unveiled in November can currently launch single high-density projectiles at velocities reaching Mach 6, or 4,500 mph, the Navy clearly wants more rapid firepower. The original request for information published by Naval Sea Systems Command in 2013 called for prototypes that could fire 10 shells a minute and store up to 650 shells; this is a weapon designed with repeat fire in mind.

Engineering a power source that can provide that fire — by repeatedly generating fluctuating electromagnetic fields over short periods of time — has been a priority for ONR. In June,Electromagnetic Railgun Program chief Tom Boucher told National Defense magazine that contractors BAE and General Atomics were testing new barrel designs and devastating pulsed-power systems capable of firing five shells in a single missile, raising the cannon’s rate of fire and increasing its destructive potential.

The newly released footage reveals that the program has met its goal — sort of. The railgun manages to build to full power and send a projectile down Dahlgren’s 25-mile Potomac River test range twice in 25 seconds, a firing rate of 4.8 shells a minute — just under the goal Boucher laid out in June. It’s mightily impressive, regardless, especially given the Navy’s intent to equip guided-missile destroyers and cruisers with the railguns — if only for defensive purposes.