The MQ-9 Reaper drone is already the deadliest UAV in the U.S. Air Force’s arsenal. Designed with a payload capacity... 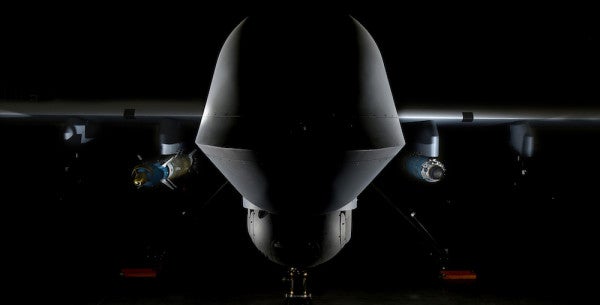 The MQ-9 Reaper drone is already the deadliest UAV in the U.S. Air Force’s arsenal. Designed with a payload capacity of 3,700 pounds and armament of AGM-114 Hellfire missiles and GBU-12 Paveway II bombs, it’s no wonder that Air Force officials announced in February that the Reaper would gradually come to replace the iconic MG-1 Predator drone as a fixture of the global war on terror.

But the Reaper’s about to get a decidedly deadly upgrade. Officials at Creech Air Force Base in Nevada announced Monday that airmen from the 432nd Wing/432nd Air Expeditionary Wing had successfully deployed a GBU-38 Joint Direct Attack Munition (JDAM) from an MQ-9 Reaper — the first time the drone has dropped the ubiquitous GPS-guided weapon in its decade of service.

“We had a great opportunity to drop the first live GBU-38s in training,” an instructor pilot from the 26th Weapons Squadron out of Nellis Air Force Base who participated in the test last week, identified as “Capt. Scott,” said in a statement. “The GBU-38 is a weapon we've been trying to get on the MQ-9 for several years now, and we had the opportunity to be the first to drop during training.”

Boeing’s GPS-based JDAM guidance kit — used to convert conventional “dumb” ordnance into “smart” bombs — has been around since 1997. But until recently, the Pentagon didn’t see JDAMs as a viable substitute for the laser-guided ordnance like the Reaper’s existing arsenal of Paveway II bombs. The War Zone explains:

But laser-directed weapons weren’t perfect, either. Most importantly, smoke, dust, and just bad weather could distort the laser beam or blind the seeker in the bomb, throwing it off target. This could potentially put troops or innocent civilians on the ground in danger and outright prevent pilots from providing badly needed support. And aviators had to get relatively close to either “lase” the specific point themselves or spot the beam another aircraft or troops on the ground were projecting on the target. JDAM offered a stand-off range up to 15 miles, depending on how high the aircraft was flying and where the enemy was situated down below.

The JDAM has since become the weapon of choice for U.S.-led aerial campaigns, especially as Boeing incorporated laser-guidance features into its J-series line of munitions. In recent years, weapons manufacturers have ramped up production in response to the intensifying bombing campaign against ISIS executed by the U.S.-led multinational coalition since 2014 — and as the U.S. continues operations in desert theaters like Iraq, Syria and Afghanistan, “dust storms” simply won’t fly as an excuse for a missed target.

An MQ-9 Reaper remotely piloted aircraft taxis on the flightline at Holloman Air Force Base, N.M., Dec. 19, 2016.Photo via DoD

The GBU-38, just like the Hellfire and GBU-12, is a very accurate weapon and the fact that it’s GPS-guided gives us another versatile way to guide the weapon, specifically, through inclement weather onto targets,” Capt. Scott said.

But the hidden bonus of the Reaper’s JDAM upgrade is an unintended one. As the War Zone points out, military drones can only currently carry a maximum of four JDAMs and GBU-12/B bombs (and eight Hellfire missiles). But future structural changes to the Reaper would open up more explosive possibilities for the UAV downrange:

However, a standard architecture for lobbing GPS-directed weapons on the Reaper would let the entire fleet employ a whole suite of existing weapons, as well as new munitions in development or already on the market. The most important of these would likely be the Boeing Small Diameter Bomb (SDB) and Raytheon’s up-coming SDB II. These 250-pound class glide bombs have proven ideal choices for attacking small targets in crowded environments…

Lockheed, Orbital ATK, Raytheon, and Textron are all offering new, small GPS- or combination GPS/INS and laser-guided bombs and missiles, pushing particularly hard with racks that hold multiple weapons aimed small aircraft and drones. Textron says three of its diminutive Fury glide bombs can fit in place of a single Hellfire and Orbital ATK is working on various options for its tiny Hatchet and Hammer weapons.

Suck it, Blue Öyster Cult: If you’re on the wrong side of the U.S. Air Force, you should definitely fear the Reaper.