The Northrop F-20 Tigershark is arguably one of the most elegant fighter jets never built. Developed during the waning years... 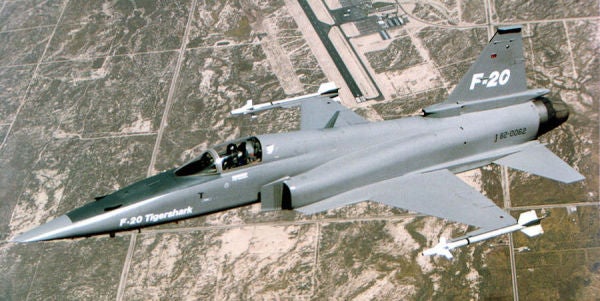 The Northrop F-20 Tigershark is arguably one of the most elegant fighter jets never built. Developed during the waning years of the Cold War, the sleek machine came equipped with the General Electric F404 turbofan engine that gave the F-20 an unbelievable acceleration and initial climb rate, positioning the fighting to “operate on short runways outfight the Soviet Union’s best,” as Defense Media Network put it in 2014.

And hell, did Northrop know how to make your mouth water for a fine piece of military machinery. Just watch this classic yet enthralling early 19080s promo video for the F-20, first flagged by our friends at The Drive.

Narrated by the legendary Air Force Gen. Chuck Yeager himself, the 13-minute sales video paints a fairly alluring portrait of the nimble and deadly fighter in action.

“The first line of defense is tactical air power,” muses Yeager in a voiceover fit for a classic Arnold Schwarzenegger trailer. “The need is for quick response, high performance, and the ability to fly again, and again, and again with only the aircraft, the men, and the supplies at hand … Only now, with the new technology of the 80s, is it possible to have a fighter with both high performance and reliability.”

Sadly, the Tigershark was doomed into non-existence not by technological failure (we see you, F-35), but political consideration. From DMN:

With the election of Ronald Reagan as president, the FX program gradually fell out of favor as the administration relaxed export restrictions. Then the 1982 signing of the U.S.-PRC Joint Communiqué on arms sales blocked sale of the F-20 to Taiwan. Worse for the F-20’s chance in other markets, the Air Force had an iron in the fire with regard to foreign military sales (FMS), as every F-16 sold to a foreign country meant the overall production cost of the Air Force’s own F-16s would go down.

Eventually, the U.S. Navy opted to go with the F-16N Flying Falcon rather than the Tigershark, slamming the door in Northrop’s face. Only three F-20 Tigersharks were ever built.