Russia’s next-generation battle tank can reportedly out-stick the American armor in a heartbeat — and it’s coming to battlefields sooner... 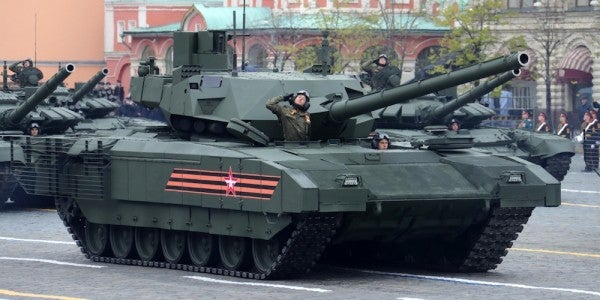 Russia’s next-generation battle tank can reportedly out-stick the American armor in a heartbeat — and it’s coming to battlefields sooner than expected.

Russian weapons manufacturer Uralvagonzavod plans on testing the T-14 Armata battle tank at a test range in the industrial city of Nizhny Tagil, deputy prime minister Dmitry Rogozin told Russian media on June 20. In development since the collapse of the Soviet Union and first unveiled as a prototype in 2012, the Russian military is currently field testing 100 Armatas with hopes to deploy the tank downrange as early as 2019. Should the new armor exceed expectations, the Russian Defense Ministry plans on procuring a total 2,300 by 2020.

The Armata is certainly a muscular machine. Army Recognition’s comprehensive technical specs indicate that the tank’s unmanned turret comes with a next-gen 125mm 2A82-1M smoothbore auto-loading main gun with 45 shells, although future variants of the Armata could boast a 152mm cannon and, allegedly, low-yield nuclear rounds. Potential secondary weapons range from a 12.7mm machine gun like the Nikitin-Sokolov-Volkova (NSV) currently utilized by the Russian military’s T-72, T-64, and T-80 battle tanks; a remote weapon station with a 7.62mm machine gun; and a 57mm cannon Army Recognition characterizes as a “grenade launcher,” although most Soviet-era weapons of that caliber are anti-tank and anti-aircraft cannons.

Related: Why Russia’s New Tanks Are A Wake-Up Call For The US »

But the most alarming thing isn’t the armament, but its range: The Armata’s main gun can reportedly fire new-and-improved 3UBK21 Sprinter laser-guided missiles capable of destroying targets up to 12 kilometers, or 7.4 miles, away — far outstripping the 4-kilometer (2.5-mile) effective range of the new-and-improved M1A2 SEP V3 Abrams’ M256 120mm main gun, according to Popular Mechanics. This means, in the event of a ground confrontation between U.S. and Russian forces on the battlefield in say, Syria or Ukraine, the Armata could defeat American armor before a platoon manages to trundle into range.

That the Armata may pose problems for a military accustomed to decades of the Abrams’ domination is likely no surprise to Department of Defense planners. In April, Army Lt. Gen. John Murray testified before the Senate Armed Services Committee that foreign tanks like the Armata and the Israeli Defense Forces’ Merkava are fast approaching “parity” with the Abrams, close to effectively challenging U.S. tank platoons on the battlefield — a trend that suggests the Pentagon has fallen behind in updating modern armor capabilities to main a strategic advantage.

Indeed, the same day that Russia’s Rogozin announced the Armata’s new timeline, the House Armed Services Committee released a draft of its fiscal year 2018 National Defense Authorization Act urging the Army to accelerate its modernization efforts with an emphasis on, among other things, “the development of a next-generation infantry fighting vehicle and main battle tank” to replace the Abrams and ubiquitous M2 Bradley IFV. But given that the Army has blown more than $18 billion over the last decade on the task without a single vehicle to show for it, the Armata may come to supplant the Abrams as the dominant main battle tank in operation today.

Despite this, anxiety over Russian tank dominance may be a bit premature. As the National Interest points out, the Russian military has a long, strange history of building terrifying war machines that don’t live up to their expectations downrange, from the hulking 44,900 T-34s that German armor and munitions obliterated during World War II to the T-80s that prove sitting ducks for anti-tank rockets in Chechnya in the 90s thanks to exposed shell propellant containers. And although the Armata ostensibly addresses the past flaws in Russia’s main battle tanks with a combination of reactive armor and an active protection system designed to intercept and destroy incoming rockets, it’s not like the Abrams is a sitting duck on the battlefield even with the Armata’s extended range.

“In real-world war situations, though, there are rarely situations where two objects at ground level are visible to one another at seven and a half miles, Popular Mechanics’ Kyle Mizokami explains. “Outside of the plains of Kansas, the Russian steppes, and the Sinai desert, there are seldom places where two objects are visible at even three or four miles. [And] even if an Armata does manage to lock onto an Abrams at extreme ranges, the … Abrams' armor, reinforced with a layer of depleted uranium and now reactive armor, is widely considered the best in the world. Reactive armor is particularly useful against the shaped charge warhead on the Sprinter.”

Time will tell how the Abrams and Armata actually stand up to one another on the battlefield. In early June, the Russian government challenged NATO tank crews to face off with Russian tank battalions its annual “Tank Biathlon,” a gesture that the War Zone smartly observed may strengthen military-to-military ties that could help de-escalate real-world conflicts as tensions between the White House and Kremlin run high. But it wouldn’t be surprising to learn that Russian officials simply want to send a message to their Western interlocutors: your days of armor dominance are coming to an end.

“It's time for a face-off with you guys,” Russian tanker crews told Russia Today in a goofy challenge to NATO. “Instead of pointing guns at each other, let's compete with each other on training grounds. Do come. We'll be waiting for you.”