Will This Russian Handgun Become ‘The AK-47 of Pistols’?

Kalashnikov Concern, the largest arms manufacturer in Russia and industrial avatar of AK-47 inventor Mikhail Kalashnikov’s genius, is branching out... 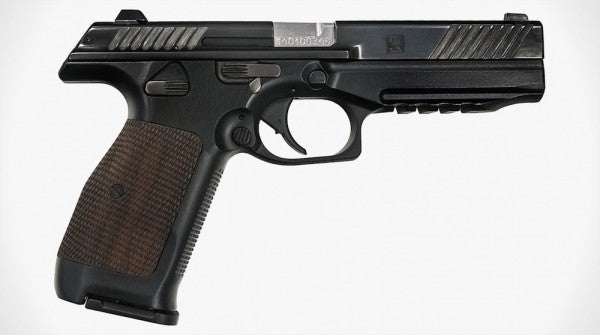 Kalashnikov Concern, the largest arms manufacturer in Russia and industrial avatar of AK-47 inventor Mikhail Kalashnikov’s genius, is branching out beyond its iconic assault rifle. The company’s been prototyping everything from autonomous tanks to high-powered sniper rifles, but the Russian weaponsmiths seem most excited about the advanced Lebedev PL-15 pistol: It could, with luck, become what The War Zone called “the AK-47 of pistols.”

The handgun, designed in conjunction with elite Russian police and sportsmen to function as an all-purpose sidearm, is in testing now and could possibly end up in the holsters of military and law enforcement agents around the world, Kalashnikov CEO Alexei Krivoruchko told Russian news agency TASS earlier this month.

“The trials are currently underway and we hope that they will be completed this year,” Krivoruchko said. “We hope that the pistol will be sought after by the Defense Ministry and other uniformed and law enforcement agencies.”

The company’s already got a reputation for manufacturing durable and reliable weapons:

So there’s a lot of appeal in the idea of a reliable pistol crafted in the same spirit of the ubiquitous AK-47 assault rifle. Here are the specs, according to TASS:

According to the corporation’s press office, the pistol chambered for the 9x19mm round is very thin — 21mm at the barrel and 28mm at the grip. It has the controls on both sides, which makes it possible for both right- and left-handed people to use it. Its characteristics ensure reduced recoil and muzzle rise and quick return to the line-of-sight.

As the press office said, the PL-14 pistol has a loaded chamber indicator, which allows the serviceman to know by touch whether the weapon is chambered or not. The pistol coupled with the modified-design chamber can fire rounds with a non-standard length.

The company first trumpeted a prototype PL-14 at a military gear convention in Moscow in 2015, before unveiling an updated PL-15 iteration of the Lebedev. In the December 2015 video below, you can watch U.S. Army Delta Force veteran and firearms expert Larry Vickers testing the original PL-14:

Vickers’s assessment — “a pretty slick gun, accurate, very controllable and easy to reload” — echoes the frequent praise that’s followed the AK-47 in its ascent as the world’s most-used rifle. But as The War Zone points out, effectiveness may not be enough to catapult the completed PL-15 to similar iconic status:

Since 2014, the drop in the global price of crude oil, a major Russian export, and international sanctions on the government in Moscow have led to a significant decline in the overall Russian economy. The United States and the European Union both imposed travel and trade bans in protest over the Kremlin’s activities in Ukraine and Syria.

In October 2016, reports began to appear suggesting the Kremlin might have to reduce defense spending by as much as 30 percent in the coming year. At least one expert suggested the actual cuts would amount to less than 10 percent, but this would still be significant.

Based on what we’ve seen, the PL-15 certainly fits The War Zone’s description of an “AK-47 of handguns.” Whether the Russian military has the cash to elevate the flexible little gun into the world’s most ubiquitous sidearm is another matter entirely.