The U.S. Army Strong Tank Challenge, a six-nation exercise co-hosted with the German Army over the last week, was billed … Continued 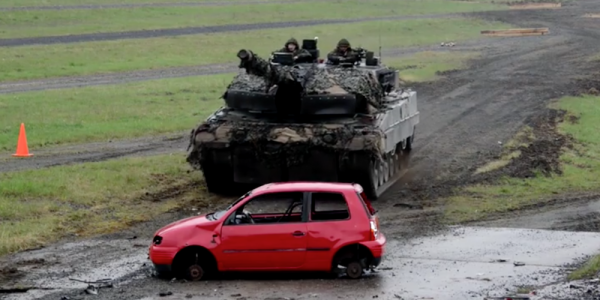 The U.S. Army Strong Tank Challenge, a six-nation exercise co-hosted with the German Army over the last week, was billed as a chance for NATO and allied forces to “project a dynamic presence, foster military partnership, promote interoperability, and provides an environment for sharing tactics, techniques and procedures.”

But what it actually is, at least according to footage released by the DoD, is really just a monster truck rally with tanks — and it’s awesome.

The second annual challenge, held at the Army's Grafenwohr Training Area in Germany between May 7-12, is no road race. According to Army Europe, the exercise consists of “offensive and defensive operations as well as tasks including vehicle identification, battle damage assessment and precision maneuvers,” all of which include navigating challenging terrain, running over obstacles, and blowing shit up.

Apart from the U.S. and Germany, this year’s exercise features tank platoons from Austria, France, Poland, and Ukraine. (The Germans proved victorious at the inaugural tank challenge in 2016.) According to Popular Mechanics, the German, Austrian, and Polish militaries fielded the Leopard 2 battle tank, which has seen action since the 1970s, while the Ukraine showed up with a platoon of Soviet-era T-64VBs. France came with its homegrown LeClerc, and the U.S. brought the M1A2 variant of the legendary M1 Abrams.

“We operated much more independently as the U.S. Army,” Acting Secretary of the Army Robert Speer told assembled tank crews at the challenge’s opening ceremonies on May 7. “Now we rely upon and must train with [Allies and partners] to build total readiness across the force.”