After years in development, the future of vertical lift has finally arrived on the Army’s doorstep: Bell Helicopter’s advanced V-280... 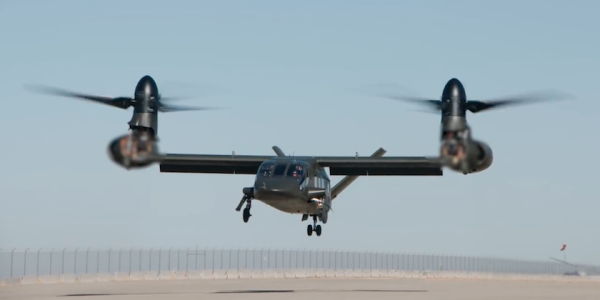 After years in development, the future of vertical lift has finally arrived on the Army’s doorstep: Bell Helicopter’s advanced V-280 Valor tiltrotor prototype finally took its maiden flight at a test facility in Amarillo, Texas, the company announced on Dec. 18 — a major milestone for a next-gen aircraft designed to meld the tactical maneuverability of the branch’s current rotary fleet with the range and force projection of fixed-wing troop transports.

Developed to replace the iconic AH-64 Apache attack chopper and UH-60 Black Hawk utility helo, the Valor boasts a top speed of 280 knots (hence, somewhat cheekily, the “V-280” designation) and a range of up to 800 nautical miles. That’s double the top speed and operational range of the tried-and-true Black Hawk. And with a troop capacity of 14 armed warfighters (plus a crew of 4) and load capacity of more than 12,000 pounds, the Valor can haul 23% more troops and 25% more cargo than the conventional utility helicopter, per Popular Mechanics.

With its first flight, the versatile Valor takes a major step towards actual combat downrange. Bell and partner Lockheed Martin were selected in 2014 to develop an aircraft for an Army research program that feeds into the Pentagon’s sweeping DoD-wide review of its helicopter fleets, the Future Vertical Lift program. In September, Bell parent company Textron Inc declared the V-280 “100%” complete; a month later, it published footage of the new aircraft flexing its tiltrotor muscles, to coincide with the Valor’s debut on the floor of the Association of the U.S. Army’s annual tech expo in Washington.

The initial flight “demonstrates our commitment to supporting Department of Defense leadership’s modernization priorities and acquisition reform initiatives,” Bell CEO Mitch Snyder said in a statement on Dec. 18. “The Valor is designed to revolutionize vertical lift for the U.S. Army and represents a transformational aircraft for all the challenging missions our armed forces are asked to undertake.”

The Valor is not unchallenged, however, in the Army’s search for a “joint multi-role demonstrator” aircraft: It’s going up against the Sikorsky/Boeing SB-1 Defiant, which debuted at AUSA in October as well. And both aircraft remain appealing options for an Army facing a worsening aviation mishap crisis: Army Safety Center data shows the branch experienced 155 total aviation mishaps since fiscal year 2014, the vast majority of which occurred in the last two years; a July 2017 DoD inspector general audit of Black Hawk fleet evaluations found that the branch failed to evaluate nearly a quarter of its airframes due to lack of oversight.

To be fair, tiltrotor aircraft don’t necessarily inspire confidence, either. The now-widely adopted Marine Corps V-22 Osprey developed a reputation as “dangerous and unreliable” after four deadly crashes claimed the lives of some 30 personnel during testing between 1991 and 2000, according to Fortune; as recently as August 2017, an MV-22 Osprey crash off the coast of Australia killed three Marines. But the Osprey has also proven essential as a utility workhorse for a Corps that’s been reckoning with its own increasing aviation mishap crisis across multiple airframes in recent years.

The flight marks the culmination of an extensive engineering effort on the part of Bell to dispel those concerns. The company conceived of the V-280 Valor as a “clean sheet” tiltrotor designed to avoid the engineering troubles that plagued the Osprey. Apart from integrating new defensive countermeasures and system redundancies meant to improve the aircraft’s durability and maneuverability during ground maneuvers (triple fly-by-wire, baby, yeah!), this meant really taking the entire tiltrotor concept back to the drawing board.

But according to the company, the tiltrotor was engineered with human error (like, say, those skipped evaluations) in mind. The cockpit of the Valor tiltrotor prototype the company showcased on the floor of AUSA in October was surprisingly sparse: Its ceiling lacks obtrusive (and potentially dangerous) toggles and switches to cut down on head trauma, and its wide, wraparound windows offer a clear view of the massive prop rotors on either side of the craft. Should the aircraft crash, the rotor blades are designed to fold and collapse in on themselves while the prop turbines eject away from the aircraft, theoretically saving the crew from a messy collision.

How the Valor will perform in future flights remains unclear, but its maiden flight Monday puts it at least one step ahead of the competition: Sikorsky’s Defiant was scheduled for its own flight tests in 2018, but the company has hit pause on the S-97 Raider high-speed scout helicopter — on which the Defiant is based — after a hard landing in August 2017 revealed serious issues with the aircraft’s flight control systems. And while Sikorsky VP Chris Van Buiten insisted at the time that the company was “fully committed to the program,” he admitted that the Defiant shares “similar features” with the Raider flight software.

Should things go smoothly for the Bell and poorly for the Sikorsky, the V-280 Valor may end up becoming the Pentagon’s rotary aircraft of choice — and making the tiltrotor a mainstay of U.S. aviation, rather than a side attraction.