Don’t Ruck Around When It Comes To Camping Gear. Your Body Will Thank You

If you purchase something through a post on our site, Task & Purpose may get a small share of the … Continued 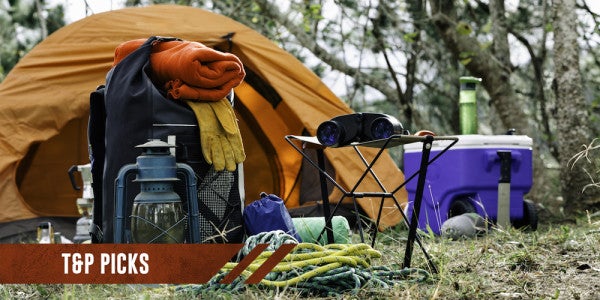 A recent list of veteran camping gear recommendations published by Task & Purpose was hilarious, but it was also a painful reminder of why so many veterans hate backpacking. Carrying too much gear designed for every possible environment for a mission we don’t fully understand was never anyone’s idea of fun, and yet that’s how most of us transition from exercises at Ft Carson to weekends in our local park.

Well, keep the rucking spirit — but it’s time to let go of the rucking burdens. To that end, here are 12 recommendations that veterans will really enjoy when they’re out in the wilderness.

Trade the cast iron skillet for an outright stove

The military taught us our packs should weigh around 30% of our body weight, and I’ve had lots of vets tell me anything less than a 100 pounds is a daypack.

Bullsh*t. Nowadays, 20% of your body weight is a good target for the average pack, and nothing over 50 pounds for a week’s outing should be your goal. Swap the skillet for a Jetboil flash cooking system, and save what’s left of your back.

Swap a woobie for a Big Boy jacket

I get the sentimental attachment to the woobie, and my inner MacGyver appreciates the versatility, but we are no longer preparing for every possible condition on the planet.

If you are headed to Big Bend in October, leave the woobie in your garage. If you’re going to the Smokies in May, buy some decent rain gear like Patagonia’s Torrent Shell.

Bushwhacking with a 90-pound ruck? Buy some boots. But if you’re hiking on a trail with a 40-pound pack, try a pair of trail running shoes: they're lighter, more comfortable shoes, reduce blisters and foot problems on the trail.

“But my ankles,” you cry! Boots aren’t going to save your ankles; carrying 30 pounds less will. Order a pair of last year’s Brooks Calderas.

Say no to that Camelback

Maybe it was just me, but every Camelbak the military issued me started leaking within two weeks. Some dribbled from the nozzle, some from the fill point, but most of them from someplace I could never find. I just carry plastic bottles now: 1-liter ones on the outside of my pack and 1.5-liter ones on the inside to cook with at night.

Ditch the hammock for a tent — maybe

I camp in a hammock and I love it, but lots of veterans with back problems find it to be a torture device. Be aware if you’re wet weather camping, by the time you add the fly, you might as well carry a tent. Grab one here.

Your e-tool is no trowel

If you’re staying put for a week and eating three MREs a day, maybe you need an e-tool. Otherwise, just bring a classic trowel. There may be some initial panic on the first morning after coffee, but as the trek goes on, you’ll be surprised how little waste you make. The orange plastic trowels break on the hardpan, so order a metal one like the Sea To Summit Pocket Trowel.

Trade your ruck for a pack

If you buy an 85-liter pack, you’ll fill an 85-liter pack — and you don’t need three survival rifles. If you’re backpacking for a week or less, then don’t buy anything over 65 liters, and the closer you get to 50 liters the better. Osprey makes good stuff.

A Bic is just fine

These lighters are awesome…and kind of expensive…and kind of useless. Between forest fires and campsites that look like a Daisy Cutter cleared the ground, fewer parks allow open flames. Stick a Bic in a ziplock bag; it’s all you need to light your stove.

Swap the Therm-a-rest for an inflatable pad

If your point of reference is sleeping directly on the ground in your teens and twenties, then the Z-Lite is a great upgrade. But just because the military didn’t give a sh*t about what you slept on doesn’t mean you have to be equally negligent.

After 25 years with the Z-lite, I upgraded to a Sea To Summit inflatable pad last year, and it was liking going from Jim Beam to Macallan 15. They’re expensive but worth it for a legit night’s sleep.

Leave the whiskey at home

Speaking of a legit night’s sleep, leave the whiskey at home. Fresh air, good cardio, and a fairly comfortable sleeping arrangement can do wonders for insomnia. Alcohol f*cks with the quality of our sleep. If you’re kinder to yourself during the day, there’s less pain to kill in the evening. Bring a cigar or a pipe if you need a ritual with which to unwind.

There really isn’t any good trail food, but some trail food is better than others. Ramen or Knorr gets the job done, but if you want a backcountry fancy feast, try Packit Gourmet.

Swallow your pride and get some trekking poles

Your hands are free now, so put them to good use. You’ll have to swallow some pride, and you’ll look like your grandfather on a birding expedition, but the stress they take off your legs on the uphills and downhills will have you going from 8 to 15 miles a day. Hiking poles are like bourbon: you can spend $20 to $220, and while there is a difference, it’s not that big of a gap.