How To Do The Perfect Pushup

Editor’s Note: This article was originally published on Greatist, a digital publication committed to happy and healthy lifestyle choices. Ever... 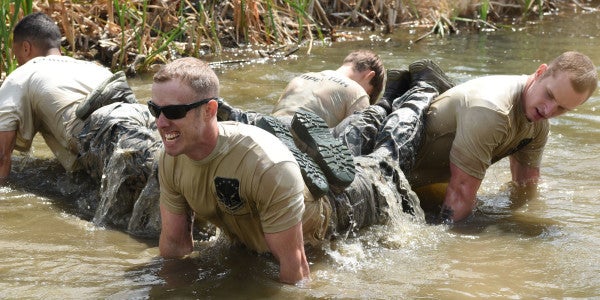 Editor’s Note: This article was originally published on Greatist, a digital publication committed to happy and healthy lifestyle choices.

Ever done a pushup and felt your hips hit the ground and your arms barely bend? We’ve been there.

A pushup is a total-body functional movement that is great for increasing strength and has the added benefit of engaging the core and lower body. Being a bodyweight exercise, it can be done just about anywhere — with a ton of variations to liven things up. So whether you’ve been unsuccessful in the past or just want to fine-tune your form, here are the details you’ll need to master a perfect pushup.

1. Get into a high plank position.

Place your hands firmly on the ground, directly under shoulders. Ground your toes into the floor to stabilize your lower half. Brace your core (tighten your abs as if preparing to take a punch), engage glutes and hamstrings, and flatten your back so your entire body is neutral and straight.

Begin to lower your body — keeping your back flat and eyes focused about three feet in front of you to keep a neutral neck — until your chest grazes the floor. Don’t let your butt dip or stick out at any point during the move; your body should remain in a straight line from head to toe. Draw shoulder blades back and down, keeping elbows tucked close to your body (don’t “T” your arms).

Keeping your core engaged, exhale as you push back to the starting position. Pro tip: Imagine you are screwing your hands into the ground as you push back up. That’s one! Repeat for 10 to 20 reps or as many as can be performed with good form.

Once you’ve nailed the basics, mix it up with one of these 82 pushup variations.

Common Mistakes (and How to Fix Them)

The Mistake: Letting Your Lower Back Sag or Arch

The fix: Sure, pushups are known for strengthening your pecs, shoulders, and triceps, but they’re a total-body move. Focus on tightening your glutes and legs. Engaging your glutes can help keep the lower back from arching or sagging during the move. And instead of letting your hips flop to the ground, press your chest to the ground first, keeping hips in the same plane as your shoulders.

The Mistake: Forgetting to Breathe

The fix: Concentrating on form and reps can make it easy to forget one of the most important parts of working out: breathing. Inhale on the way down and exhale on the way up.

The Mistake: Flaring Your Arms

The fix: Letting those arms pop out to 90 degrees can be really tough on the shoulders. Instead of forming a “T” with the arms and body, keep your elbows tucked closer at about a 20- to 40-degree angle to your torso.

The Mistake: Cheating Yourself

The fix: The key is quality over quantity. Make sure each pushup reaches a full range of motion by getting your chest as close to the floor as comfortable, then fully extending your elbows at the top. Having sloppy form will make for a less effective exercise that targets fewer muscles.

The Mistake: Straining Your Neck

The fix: If you’ve ever had neck pain while doing a pushup, chances are you’re not holding your neck in a neutral position. You can fix this by picking a point on the floor a few feet in front of you to stare at. If you still feel yourself twisting your neck into a strange angle, drop to your knees until your form improves.

This article, “How to Do the Perfect Push-Up,” originally appeared on Greatist.