Shooting, crawling, lobbing grenades, getting melted by lighters stolen from our father’s cigarette drawer, calling in airstrikes on Panzer divisions... 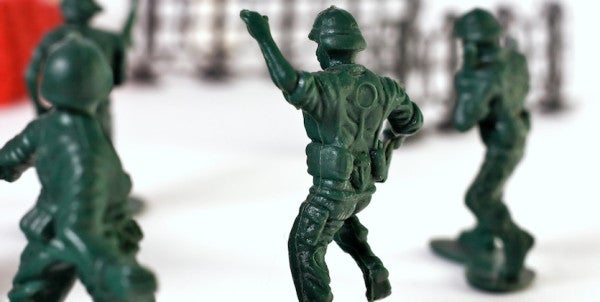 Shooting, crawling, lobbing grenades, getting melted by lighters stolen from our father’s cigarette drawer, calling in airstrikes on Panzer divisions advancing across kitchen floors — that’s the stuff little green Army men have been doing since they first rolled off the assembly line in the 1930s. Fighting imaginary wars is what they do. But the downward facing dog?

Well. Now they do that, too.

That’s right. A company called Yoga Joes has created a line of little Army men who’ve laid down their rifles and bazookas to pursue the spiritual life. They’re called the Inner Peace Keeping Force, and their mission is to fight the war that rages within us all. Available in traditional green and midnight purple, they can be purchased in packs of six for $20. Mini pumpkin spice lattes and gluten allergies NOT included.

IPKF doesn’t just exist to sit on your desk and constantly remind your coworkers that you’re a person who does yoga — or, better yet, a veteran who does yoga (the yin ANDthe yang!). According to Yoga Joe’s website, the toys are intended to promote yoga as a form of alternative treatment for service members struggling with PTSD. They also just look cool.

On Yoga Joe’s Instagram feed, members of the IPKF can be seen performing what appear to be extremely advanced yoga poses, although we can’t say for sure because the one and only time we attended a yoga class we nearly passed out from heat exhaustion and then spent the rest of the day watching reruns of American Ninja Warrior and getting drunk on Bud Light.