Ruth Bader Ginsburg Is Hella Stronger Than You, Thanks To This Soldier

Can Ruth Bader Ginsburg make it through the Trump years? Not to be grim, but the liberal Supreme Court justice... 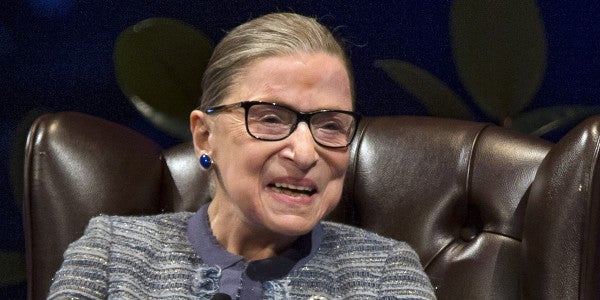 Can Ruth Bader Ginsburg make it through the Trump years? Not to be grim, but the liberal Supreme Court justice turns 84 next month, and that’s “make sure your will designates an executor” old. If the diminutive jurist were to suddenly pull a Scalia and shuffle off this mortal coil, Donald Trump could shift the high court’s balance of power in a way that’s eluded conservatives for decades.

Ginsburg has a not-so-secret weapon: an enlisted Army Reservist.

For two decades, Bryant Johnson — a jump-qualified sergeant first class who, by day, manages records in the District of Columbia’s federal circuit court — has been moonlighting as a certified personal trainer to some of the most important legal thinkers and staffers in America. They include a bunch of federal judges and three “supremes”: Elena Kagan, Stephen Breyer, and Ginsburg.

“Exercise is the great equalizer,” Johnson has said of his passion. “It doesn’t matter what size, shape or color you are.”

Related: How To Do The Perfect Pushup»

The Supreme Court is perhaps the only elite team in the world whose first stringers are supposed to stay on the bench. Making sure those benchwarmers don’t get too soft or sick is no small order when the average age on SCOTUS approaches 70. But since starting her regimen with the gruff-but-supportive soldier, the 100-pound Ginsburg has upped her personal bests on the bench press, front and side plank, and pushups.

“When I started, I looked like a survivor of Auschwitz,” Ginsburg told The Washington Post. “Now I’m up to 20 push-ups.” When an interviewer asked Ginsburg earlier this month who the most important person was in her life, the widowed mother of two replied: “My personal trainer.”

The inside story of SCOTUS’s military trainer isn’t new in Beltway circles; Johnson’s gotten nice writeups for years, and his work with Ginsburg was also chronicled in a favorable 2015 biography, “Notorious R.B.G.”

But Trump’s election and Ginsburg’s age recently have focused new attention on Johnson. This week, Politico Magazine reporter Ben Schreckinger met up with Johnson and went through this 90-minute Ruth Bader Ginsburg workout regimen. It kicked his ass.

Nevertheless, midway through the workout, Schreckinger still had enough wind in him to ask Johnson what he thought about Roe v. Wade. “I stay in my lane,” the soldier said, before torturing the reporter with one-legged squats, sometimes counting only every other rep. Which, regardless of where you stand on abortion or reporters, feels like a pretty good response.

CORRECTION: Ruth Bader Ginsburg has two grown children. An earlier version of this item erroneously stated she had none. (2/18/17; 2:30 PM)