Students of history know that adversity and dread can turn on a dime into freedom and change, and it's often the most humble and little-known individuals who are the drivers of it. During the very darkest days of the Battle of the Bulge in World War II, Augusta Chiwy was such a catalyst, and hundreds of Americans lived because of her 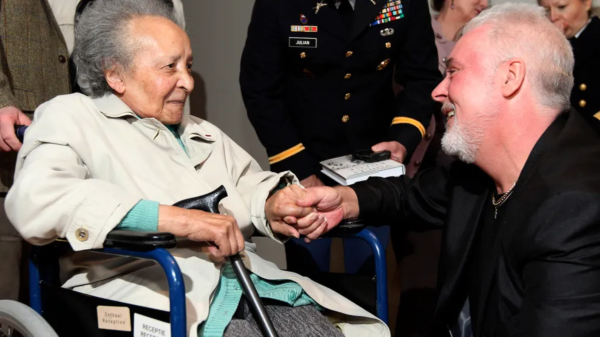 Editor's note: a version of this story first appeared in 2015.

Most people haven't heard of an elderly Belgian-Congolese nurse named Augusta Chiwy. But students of history know that adversity and dread can turn on a dime into freedom and change, and it's often the most humble and little-known individuals who are the drivers of it.

During the very darkest days of the Battle of the Bulge in World War II, Chiwy was such a catalyst, and hundreds of Americans lived because of her. She died quietly on Aug. 23, 2015, at the age of 94 at her home in Brussels, Belgium, and had it not been for the efforts of my friend — British military historian Martin King — the world may never have heard her astonishing story.

Along with her brother, Charles, Chiwy's white European father brought her to Belgium at the age of nine. Almost nothing is known of her birth mother. She spent the remainder of her childhood in Bastogne, ultimately leaving for Leuven in her early twenties to attend nursing school. While there in December 1944, Chiwy decided to accept an invitation from her father to go home and spend Christmas with him and his sister. By this time, American and British forces had breached the Siegfried line along the German border and were pushing the Nazis toward the Rhine.

On the morning of Dec. 16, 1944, Chiwy left Leuven by tram, but when she reached Brussels to transfer southward, she discovered that all trains bound for Bastogne and Luxembourg were terminating at the city of Namur. From there, passengers were forced to travel aboard cattle trucks a further 20 miles to the town of Marche. It was a chilly ride with temperatures plunging to -20 degrees Fahrenheit and colder. After spending more than 15 hours on the road and having used trains, trucks, a U.S. Army Willys Jeep, and even a bicycle, she finally reached Bastogne. Little did she know the firestorm that awaited her.

Chiwy had no idea that Hitler had broken through the lightly defended western front in an all-out effort to seize the Port of Antwerp with the intent of suing for peace and ending the war. Violence dramatically increased as the Nazis advanced westward, leaving a trail of destruction and forming a significant “bulge” in the battle lines. As the situation grew more desperate, a U.S. Army doctor, Capt. John “Jack” Prior, who was assigned to the 10th Armored Division, found himself just north of Bastogne in the village of Noville as his small unit tried to hold back the enemy onslaught. While the dense Ardennes fog initially aided them in keeping the danger at bay, casualties began flooding Prior's aid station. The tiny force was overwhelmed and not long after Chiwy's arrival at her father's home, they evacuated to Bastogne. Within a few days of the start of the German offensive, the strategically important town was surrounded by enemy forces.

Prior's staff combed the city for anyone with medical experience to aid in caring for the large number of casualties expected in its defense, but they only found two people: a young nurse named Renee Lemaire and Augusta Chiwy. Both women volunteered to help Prior as U.S. forces struggled to maintain their tenuous hold against brutal attacks by well-equipped German divisions. As German artillery fire began to intensify inside the American perimeter, the small group set up shop in an abandoned building that had served as a grocery store. With living quarters upstairs and a cellar below, it was about the best location available for a new aid station.

Prior discovered that Chiwy was adept at treating the bloodiest and most grave of injuries, handling amputees, severe bleeding, large thoracic wounds, and other results of battlefield trauma. Lemaire was the comforter — best at soothing soldiers in pain and keeping them clean.

Because racism was still fairly institutionalized in the United States in 1944, Chiwy, a mixed-race woman, was the subject of bigotry from a few American G.I.s on several occasions. There were many who refused to be treated by her, to which Prior's response was usually, “She treats you or you die.”

At least four times, Prior and Chiwy made extremely risky trips to the front lines to evacuate the wounded. One of the most significant of these was at a promontory just outside Bastogne called Mardasson Hill, which today is the location of the largest American monument outside the United States. Here, Chiwy and Prior came under intense rifle, machine gun, and artillery fire in a dangerously exposed position, but they still managed to treat and evacuate several critically wounded men.

Chiwy, who wore a long nurses' gabardine, came through unscathed, but found bullet several holes in the garment. In later years, she recalled in interviews with King that Prior said, “Looks like they almost got you. It's a good thing you're small.” She joked that her answer was, “A black face in all that white snow was a pretty easy target. Those Germans must be terrible marksmen.”

As the Nazi vice tightened on Bastogne, casualties mounted considerably. Because of the foggy weather, Allied Air Forces were unable to drop medical supplies into the city, and Prior's medics were forced to use bed sheets and any other available fabric as bandages. Cognac, found in abundance in Belgian cellars, became the only real form of anesthesia. In one extreme case, Prior and Chiwy were forced to amputate a man's hand and leg with the serrated side of an Army-issue survival knife.

On Christmas Eve, Prior and Chiwy briefly left the aid station and entered the house next door to escape the miserable carnage. Once inside, the drone of aircraft were heard overhead, but what they thought was an airdrop was in fact an enemy bombing mission. Their aid station took a direct hit and blew both of them across the adjacent building. They survived, but their makeshift medical center was leveled to the ground, killing 30 patients inside as well as Nurse Lemaire.

The aid station where Chiwy volunteered in Bastogne, Belgium, after being destroyed by German bombs on Dec. 24, 1944.
(DoD photo)

When Bastogne was liberated by Gen. George Patton on Dec. 26, Prior and Chiwy had moved to another clinic performing services across town at Heintz Barracks. They both eventually left Bastogne in January 1945. Prior eventually moved eastward, became a pathologist and raised a family.

Chiwy also survived to raise a family, but suffered severe post-traumatic stress for the rest of her life, often succumbing to bouts of selective mutism as a result of her experiences. The Red Cross sent her a letter of thanks for her service to the United States, but her incredible efforts were largely forgotten after the war and she faded into obscurity.

While doing research on World War II veterans in 2007, Martin King came across a story about “a black nurse” who served in Bastogne during the Battle of the Bulge. Legends had floated around for years about such a person, and King wondered whether such an individual really did exist. His extremely in-depth investigation ultimately revealed that Chiwy was indeed a real person and had been living for years in a retirement home in Brussels. When he finally met her, she agreed to tell him her story.

King quickly realized the unbelievable heroism she displayed during the war and petitioned the Belgian royal family to recognize her. In 2011, King Albert II officially declared Chiwy a Knight of the Order of the Crown, and the U.S. Army presented her with its Civilian Award For Humanitarian Service in 2011. Nurse Augusta Chiwy finally received her much-deserved recognition. As King rolled her wheelchair into the main hall at the Royal Military Museum in Brussels to receive her awards, the world's press began snapping away.

He whispered to her, “This is all for you, Augusta.” Her wry retort: “They took their time, didn't they?”

Nurse Augusta Chiwy was a veteran. She may not have worn a military uniform, been an American, or even spoke fluent English, but her valor and sacrifice are worthy of our most humble respect. Her story is now the subject of an Emmy-winning documentary film called “Searching For Augusta,” by Mike Edwards and Martin King.

Martin King contributed to this reporting. King is a British military historian currently living in Belgium. King has published numerous books about World War II veterans — most recently, “The Fighting 30th: They Called Them Roosevelt's SS” — and served as a historical consultant for the History Channel.