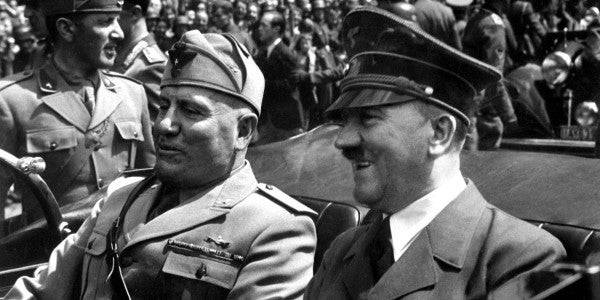 “CIMELODY-3 was contacted on 29 September 1955 by a trusted friend who served under his command in Europe and who is presently residing in Maracaibo,” the acting intelligence chief in Caracas, Venezuela sent to his supervisor days later, on October 3, 1955. “CIMELODY-3's friend stated that during the latter part of September 1955, Phillip CITROEN, former German SS trooper, stated to him confidentially that Adolph HITLER is still alive.” It continued, “CITROEN commented that inasmuch as ten years have passed since the end of World War II, the Allies could no longer prosecute HITLER as a criminal of war.”

“The source thought it worthy of sending up to HQ which is notable,” a source in the Department of Defense tells me. “Even at the time, those guys had to do a lot of separating the wheat from the chaff.”

What’s more, there is a purported photo. “On 28 September 1955, CIMELODY-3’s friend surreptitiously obtained the photograph CIMELODY-3 referred to. On 29 September 1955, the photo was shown to CIMELODY-3 for purposes of getting his reaction to the possible veracity of this fantastic story.”

In the declassified memo, the photo is attached, showing an “Adolf Schrittelmayor” in Tunga, Colombia in 1954, seated next to a companion. “The person on the left is alleged to be CITROEN and the person on the right is undoubtedly the person which CITROEN claims is HITLER. The back side of the photograph contained the following data: ‘Adolf Schrittelmayor, Tunga, Colombia,1954.’”

The figure in the purported photograph clearly resembles the Nazi leader who committed suicide on April 30, 1945, in his bunker in Berlin, to avoid being captured by the Red Army. Conspiracy theories have flourished for years that senior officials in the Nazi high command escaped to South America, including the most infamous of all.

Those theories, for Hitler, have generally centered around Argentina, not Colombia, and it was widely presumed he would be heavily disguised–not keeping his first name and looking the exact same as his world-famous appearance during the bloodiest conflict in human history. The United States Secret Service issued images in 1944 about how he might try to disguise himself.

The Soviets and then the Russian Federation claimed for years to have some remains of Hitler, though the bodies of both he and Eva Braun, his longtime lover turned wife, were hastily cremated. Still, Moscow claims they recovered partial remains. But the Russians were embarrassed in 2009 when an American scientist was allowed to examine the skull for an hour claimed the skull was definitely female, not male, and from a person aged 20 to 40, not 56, Hitler’s reported age of death. The Russian FSB fiercely denied this account from Nick Bellantoni of the University of Connecticut.

“The Soviet story of handling them shortly is fraught with inconsistencies,” the Defense official argues. “It would appear both the USSR and the U.S. seriously considered that he was not dead. It was the Wild West when Berlin fell. Some senior Nazis gave fake names and survived as unnoticed regular soldiers in Soviet camps, some were rumored to have dressed similar-looking dead bodies in their uniforms, some used the preexisting exfiltration networks to get out. … There are age-advanced photos out there of Hitler, put out by U.S. intelligence.” Still, when pressed, the official put the chance that Hitler actually escaped to South America at five percent. “While suspicious and out of character the KGB story is much simpler and more plausible than him living for years in South America.”

Still, in the week the administration dragged out the declassification of all its JFK assassination files for another six months, documents like this historical curiosity will certainly provide fodder for further conspiracy theories.

Curt Mills is a foreign-affairs reporter at the National Interest, where this article first appeared. Follow him on Twitter: @CurtMills.