How Mandatory Military Service Started In The Civil War

On July 7, during the height of the Civil War, President Abraham Lincoln issued a proclamation putting into effect the … Continued 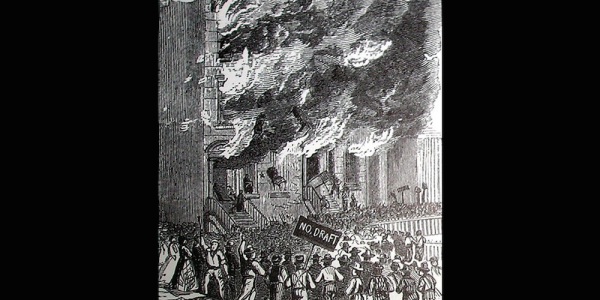 On July 7, during the height of the Civil War, President Abraham Lincoln issued a proclamation putting into effect the first military draft after several months of registration. It was authorized by the Enrollment Act of 1863 passed in March, and was the first draft actually enforced in the history of the United States.

Though the Militia Act of 1792 ostensibly ordered every able-bodied man into the militia, it was never consistently enforced. The wave of enthusiasm and volunteers at the outbreak of the Civil War had waned in the face of defeat and slaughter in the eastern campaigns.

The enrollment act affected all able-bodied male citizens and immigrants who had applied for citizenship aged from 20 to 45, with deferments granted to anyone who could pay $300 or hire a substitute.

To call the draft unpopular would be an vast understatement. Many criticized it as an affront to personal liberty that undermined voluntary enlistments. Volunteer soldiers often held draftees in contempt, and there was fear that men forced to fight would do so poorly. Many draftees did the equivalent of burning their draft cards and simply did not show up.

Some of the loudest complaints were over the $300 deferments and the hiring of substitutes. That was a huge sum for the average laborer in 1863, making it seem like the well-to-do could simply buy themselves out of the conflict. Such were labeled “$300 men” and viewed as plutocrats sending the working man to die in their place. A rallying cry for anti-draft protesters was “A rich man’s war but a poor man’s fight.”

The practice of employing substitutes sparked some of the same complaints, but beyond that it was riddled with fraud. Professional “jumpers” would take the substitution payment, desert their units before they left for the front, then repeat the process. Officers would complain about seeing the same men arrive with new recruits multiple times.

Resentment boiled over in New York City on July 13, 1863, when the New York draft riots broke out. It was the worst civil disturbance in New York’s history, requiring troops to be called fresh from the battlefield at Gettysburg to bring order. Rioters composed mostly of Irish immigrants targeted black New Yorkers in particular, resenting them as the cause of the war and the competition for jobs. Many were lynched, and even the Colored Orphans Asylum on Fifth Avenue was burned to the ground.

In the face of such opposition, Congress amended the enrollment act twice in 1864 and 1865. The first limited an exemption to one year after paying $300, after which they had to serve or hire a substitute privately. The second imposed denationalization, or loss of citizenship, for deserters and draft dodgers. By this point, however, the war was as good as over.

In reality, few facing the draft ever had to serve. Extended families would pool money to buy out whatever member was drafted. Jumping allowed one man essentially take the place of many. It was observed that the draft was better at raising money then raising men. Of the more than 750,000 drafted in 1863 and 1864, only roughly 46,000 ever saw the battlefield.

The Confederacy had actually instituted a draft a year earlier in 1862. They faced a critical manpower shortage in the face of the Union’s huge population advantage. But they had many of the same problems and complaints, with men who owned more than 20 slaves exempted. Considering the South seceded ostensibly due to government tyranny, the draft was seen as deeply ironic.

In the end, the draft during the Civil War produced much more acrimony than men, effectively functioning as a tax more than as a way to raise armies. The Selective Service Act of 1917, instituted following an extreme shortage of volunteers for World War I, proved far more comprehensive and successful.

By the end of the Vietnam War, widespread opposition to the draft lead to its repeal. The last men were conscripted in December 1972. Chief Warrant Officer 5 Ralph E. Rigby, the last Vietnam-era draftee to still be on active duty, retired in 2014.