If there’s one thing you could say about Marine and soldier Jacklyn H. Lucas, it’s that he was a stubborn... 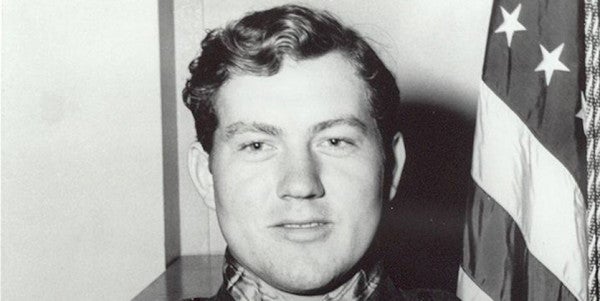 If there’s one thing you could say about Marine and soldier Jacklyn H. Lucas, it’s that he was a stubborn kid whose determination earned him the highest honor awarded in the military and two close calls with death. It’s been 72 years since he became the youngest Marine to receive the Medal of Honor at only 17, and Lucas is still remembered for being indestructible.

Lucas was as American as they come. Growing up in Plymouth, North Carolina, in the 1930s, he watched as the world was dragged into a second great war. The son of a tobacco farmer, Lucas began attending Edwards Military Institute in a nearby town called Salemburg, but after awhile, he grew anxious watching the looming threat of war in Europe.

Wanting to fight, but being only 13 years old when President Franklin Delano Roosevelt and Congress formally declared war after the Dec. 7, 1941 attack on Pearl Harbor, Lucas was sidelined from action. At 14, however, he decided that he couldn’t sit back and watch war happen from the comfort of school. On Aug. 8, 1942, he ran away to Norfolk, Virginia, and enlisted in the Marine Corps, forging his mother’s consent, and persuading a notary to vouch that he was 17.

Lucas was then sent to Parris Island for training, but a few months into his service, the Marine Corps discovered his age. When Corps officials tried to send him home, he threatened to simply join the Army instead, and apparently that was enough for the Marines to keep him, shipping him off to a depot post in Hawaii, out of harm’s way, according to Defense Department records.

As the war drew to a close in 1945, Lucas was afraid of missing out on the fight and made the choice to stow away on the USS Deuel, which was transporting 1st Battalion, 26th Marines under the 5th Marine Division to Iwo Jima. Not wanting to be caught, show, he survived off of just bread crumbs.

On Feb. 8, 1945, just one day before Lucas would have been listed as a deserter for abandoning his post in Hawaii, he turned himself over to Capt. Robert Dunlap, who employed him with C Company. “I’d like to have a whole shipload of fellows that want to fight as bad as you,” Dunlap’s superior apparently said.

It was on Feb. 20, 1945 that Lucas was ambushed along with three other Marines by Japanese troops, who launched grenades into their foxhole. In a snap decision, Lucas sacrificed himself, throwing his body atop the other men to protect them from the blast. “I hollered to my pals to get out and did a Superman dive at the grenades,” he recalled in a 1945 interview. His fellow Marines thought he was dead for certain, but hours later, Lucas was miraculously found alive. And after nearly a day’s worth of surgery, he survived with more than 250 pieces of shrapnel still in his body.

In September 1945, Lucas was medically discharged. But on Oct. 5, 1945, he stood along with 13 other veterans on the South Lawn of the White House as President Harry S. Truman presented him with the Medal of Honor. At 17 years old, Lucas was the youngest service member to ever be awarded the military’s highest honor.

But Lucas’ service career and brushes with death didn’t end with World War II. In 1961, he rejoined the military, this time as a paratrooper with the 82nd Airborne Division.

During his first training jump, his parachute didn’t to open. His reserve parachute failed too. But Lucas inexplicably evaded death for a second time. Despite falling 3,500 feet, he was completely unscathed.

After four relatively quiet years of service in the Army, Lucas retired as a captain. He was never deployed abroad again, instead finishing out his career training new soldiers for Vietnam.

In 2006, he published his memoir — Indestructible — a fitting title for a man who seemingly couldn’t be killed.