This Is The World’s First Knife Hand

A Marine is deadly on land or sea, with gun or knife, but there’s one weapon that’s wholly the provenance... 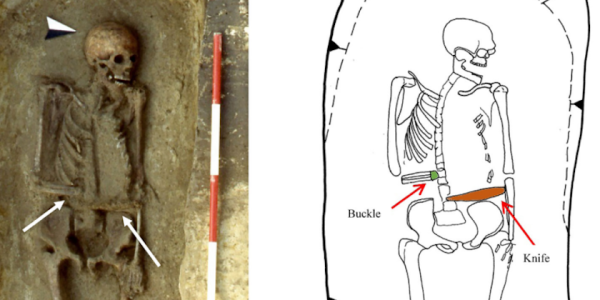 A Marine is deadly on land or sea, with gun or knife, but there’s one weapon that’s wholly the provenance of the U.S. Marine Corps: the knife hand.

Formalized by then-Brig. Gen. Silas Casey during the American Civil War, the methodology behind the all-American knife hand is simple: The hand “shall be raised smartly to an angle of 45 degrees and, through rapid vigorous motion, be brought down in a series of strokes viz a trebuchet.” There’s a reason why Secretary of Defense James Mattis described the kill/casualty radius of his own knife hand as “whatever your Marines make it … hundreds of miles”; the knife hand is a Marine’s best friend.

It’s also, we now know, far older than modern militaries — sort of. New research published in Journal of Anthropological Sciences reveals that a human skeleton excavated from a necropolis on northern Italy came with a literal f*cking knife hand.

Photo and drawing of T US 380. Notice the orientation of the right arm, the position of the
D-shaped buckle and the location of the knife. Unlike most burials, the right arm of the individual
was bent over the pelvis in correspondence of both buckle and knifeJournal of Anthropological Studies/Dr. Gianni De Zuccato and Dr. Brunella Bruno

The skeleton, referred to under the regrettable MOS of “T US 380,” apparently replaced his amputated right hand with a short blade by attaching a metal cap to the stump of his wrist with a leather strap and a buckle and “tightening the prosthesis with his teeth,” the researchers write.

And apparently, the makeshift knife hand served this poor dead Italian bastard just fine without modern medicine! “This Longobard male shows a remarkable survival after a forelimb amputation during pre-antibiotic era,” the researchers explain. “Not only did he adjust very well to his condition, he did so with the use of a culturally-derived device, along with considerable community support.”

Why the VA hasn’t started offering these out to Marines is beyond me. But I’ll say this: I know exactly what we’re getting Mattis for his next birthday, the innocent bystanders of Washington, D.C., be damned.