In the early hours of April 25, 1980, President Jimmy Carter made a sober announcement to the nation: An attempt... 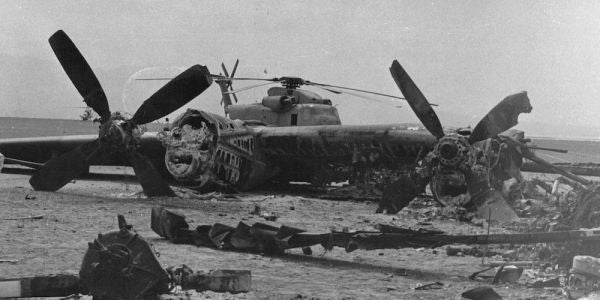 In the early hours of April 25, 1980, President Jimmy Carter made a sober announcement to the nation: An attempt by U.S. military forces rescue the 52 staff held hostage at the American embassy in Tehran since the Iranian Revolution in 1979, had ended in a catastrophic failure without even engaging the enemy.

According to Carter, equipment failure aboard several of the eight RH-53D Sea Stallion helicopters launched from the USS Nimitz led the president to abort the mission. But during the strike forces' withdrawal, one of the Sea Stallions collided with an EC-130. Five airmen and three Marines were killed in the ensuing explosion.

“There was no fighting; there was no combat,” said Carter. “We were all convinced that if and when the rescue operation had been commenced that it had an excellent chance of success … To the families of those who died and who were wounded, I want to express the admiration I feel for the courage of their loved ones and the sorrow that I feel personally for their sacrifice.”

The botched rescue operation is widely credited with costing Carter re-election in a crushing defeat to former California Gov. Ronald Reagan during the 1980 presidential election. (Mark Bowden, the journalist best known for the story that became “Black Hawk Down,” authored a remarkable timeline of the operation of Operation Eagle Claw in a 2006 issue of The Atlantic).

But as our friends at Soldier Systems point out, their sacrifice was not in vain. In fact, it led to the development of the modern special operations capability we know today.

In May 1980, the Joint Chiefs of Staff commissioned a Department of Defense's Special Operations Review Group to evaluate the underlying causes of the botched rescue mission, examining every stage from planning and organization to mission command and control. Led by former Chief of Naval Operations Adm. James L. Holloway III, the so-called Holloway Report concluded that the “ad-hoc nature” of Eagle Claw's organization and planning created too much room for error.

“By not utilizing an existing JTF organization,” Holloway and his fellow senior military officers wrote, “the Joint Chiefs of Staff had to start, literally, from the beginning to establish a JTF, create an organization, provide a staff, develop a plan, select the united, and train the force between the first mission capability could be attained.”

Within a few years, the Holloway report catalyzed not only a sweeping reorganization of the Department of Defense but the creation of the United States Special Operations Command, a unified command apparatus to ensure that a lack of inter-service communication didn't yield another unforced error for special operators downrange.

Despite the perception of Operation Eagle Claw as a failure, the sacrifices of those eight American servicemen were not in vain. The botched mission “pointed out the necessity for a dedicated special operations section within the Department of Defense with the responsibility to prepare and maintain combat-ready forces to successfully conduct special operations,” as airman Luke Kitterman wrote Monday.

Without that failed mission, we likely wouldn't have elite units like Delta Force, Army Rangers, Navy SEALs on the front lines of the Global War on Terror. Those eight servicemen may have died without firing a shot, but without them, U.S. special operations wouldn't be what it is today.