Inside America’s secret nuke tunnels beneath the ice of Greenland

Camp Century had a “Main Street,” a chapel, a movie theater, a gym, and 600 nuclear missiles. 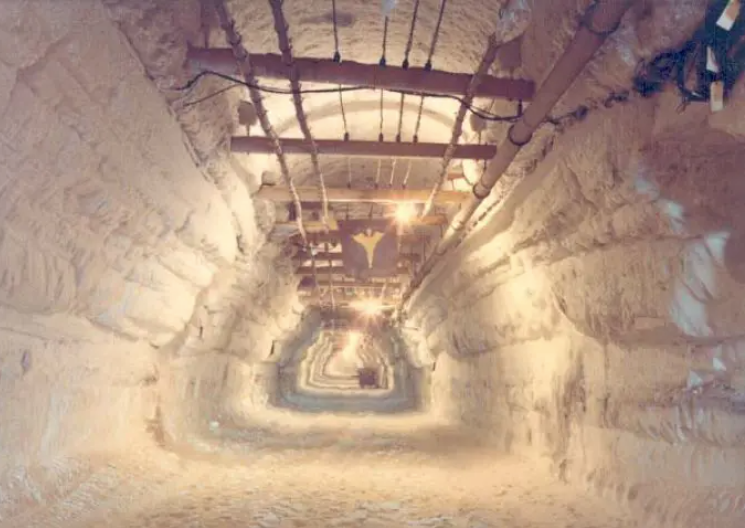 In pursuit of nuclear deterrence, the United States has occasionally crossed over the line into schemes seemingly more appropriate for a James Bond movie than the defense budget, but few were as crazy as Project Iceworm.

Throughout the Cold War, the United States and Soviet Union were locked in steady competition not only for the most capable and powerful nuclear weapons, but for novel approaches to deliver them.

Both world powers were aware that any nuclear attack would likely begin with strikes against the opposing nation’s nuclear arsenals aimed at limiting their capacity to respond in kind. As such, massive efforts were undertaken to make huge nuclear weapons mobile, hidden, or otherwise insulated from attack.

While the Soviet Union invested in armored trains that could transport their massive ICBMs around Siberia and Frankenstein-like helicopter contraptions capable of delivering huge nuclear payloads to distant launch sites, they were not alone in their nuclear exploits that verged on Bond-villainy.

While the Russian military has been working exhaustively in recent years to secure and fortify large swaths of the Arctic Circle, the concept of the frigid north as a theater of battle is certainly nothing new. In many cases, the shortest distance between American and Russian weapons systems and targets is North — over the Arctic Circle. As such, jockeying for position in the Arctic seemed like a strategic inevitability.

It was with that concept in mind that the United States established an agreement with the Danish government in 1960 to begin construction of what would be a large military facility built under the ice of Northern Greenland.

According to the Pentagon, this program that would lead to the construction of “Camp Century” had a number of important goals: To test various construction methods in Arctic environments, assess the use of a semi-mobile nuclear reactor for power, and to support ongoing scientific experiments in the region. Of course, in true Cold War fashion, these logical seeming goals were more about cover than they were about progress.

The real intent behind this new initiative was to establish a massive series of under-ice tunnels capable of supporting the storage, transportation, and launch of specially designed nuclear ballistic missiles, dubber Project Iceworm.

By leveraging tunnels in the ice for this purpose, the United States could launch a bevy of nuclear weapons at their Soviet opponents from beneath the ice, while moving missiles frequently to make it nearly impossible for the Soviets to defend against, or even attack, the missile placements.

Camp Century – An installation and a cover story

Located less than a thousand miles from the North Pole, the ambient temperature in the area that would become Camp Century averaged at 10 degrees (F) below 0, with common occurrences reaching as cold as -70. Average snowfall accumulation in the area at the time was four feet per year, with wind gusts raging at 70 miles per hour. Building a military installation on the surface of the Northern Greenland ice sheet, then, was next to impossible.

Starting in 1959, the U.S. Army Engineer Corps began excavating two miles worth of tunnels beneath the north Greenland ice sheet using a method referred to as “cut and cover.” This approach leveraged massive, Swiss-built, rotary tilling machines that would dig large trenches in the snow and ice. Once the trenches were dug, an arched steel roof was put in place over the new trench, which was then reburied.

Beneath the arched steel roof and layer of ice and snow, the U.S. Army had created what were effectively tunnels, which could then be used to construct work spaces, housing, and even areas for recreational activities — aside from the intended six hundred nuclear missiles and all accompanying equipment called for by the clandestine Project Iceworm.

The facility was powered by the globe’s first ever semi-mobile nuclear generator, the PM-2A, though as the program went on and issues compounded, the nuclear generator was swapped out in favor of more traditional diesel equipment.

Working space beneath the ice quickly grew, and by the end of 1960, Camp Century included an area known as “Main Street” that was more than 1,100 feet long, 26 feet wide, and 30 feet tall, as well as multiple barracks facilities, a chapel, a base library, a complete gym, and even a movie theater.

Each barracks facility included one large common area and five individual rooms, which were separated from the ice surrounding them by an air gap to minimize the melting caused by the room’s internal heating. Deep holes were drilled into the ice cap to provide a fresh source of cold air, also to help manage melting.

At its peak, Camp Century housed over 200 Soldiers, hidden from the frigid cold of the outside world beneath a blanket of snow and ice.

All of that manpower and tech wasn’t just about testing the feasibility of military operations in the frigid cold, of course, and America’s Project Iceworm was the real impetus behind the effort. Everything from the deployment of the PM-2A nuclear reactor to the logistical effort put behind establishing steady and often covert supply lines to the facility were truly about assessing the feasibility of the ice shelf as a launch pad for nuclear weapons.

The long term plan called for 2,500 miles of subsurface tunnels to be constructed and maintained to host a stockpile of 600 specially modified medium range nuclear missiles dubbed “Iceman” missiles. These missiles were developed by modifying the U.S. Air Force’s existing stockpile of Minuteman missiles for use in extreme cold.

Many of these tunnels would house railroad tracks which could be used to transport the large missiles quickly and easily from one place to another, while teams would be tasked with digging and fortifying new tunnels each year. Each new tunnel would offer a new location to store or launch missiles, making tracking or engaging the subterranean arsenal next to impossible.

If fully realized, Project Iceworm’s tunnel complex would eventually encompass some 53,000 square miles and employ a whopping 11,000 military personnel. For context, the entire nation of South Korea covers only about 39,000 square miles.

Having the ice pulled out from beneath your feet

While the strategic value of a massive, subterranean missile complex was easy to ascertain, the challenges of building and maintaining military facilities beneath the surface of an ice sheet soon proved more than expected. While the Defense Department had believed the ice to be fairly stationary and stable, the reality of the matter was that even the massive Texas-sized ice sheet they’d set up shop on was a pretty dynamic environment.

By 1962, the ceiling in the room housing Camp Century’s nuclear reactor had already lowered by five feet, forcing expensive repairs in order to maintain operations. Soon, core samples were taken that confirmed the pressing concerns of scientists involved: The ice sheet was moving so rapidly that the entire installation would prove unusable in just a matter of a few years.

In 1963, the nuclear reactor was replaced by diesel generators and America’s dreams of a vast underground missile complex in Greenland were all but dead. By 1965, the facility was abandoned, only to be revisited by a team of specialists in 1969 to assess its condition.

Project Iceworm had been cloaked in secrecy since its onset, and based on the conclusions delivered by the team, that secrecy would remain intact thanks to heavy ice and snow development in the area. Importantly, a significant amount of equipment, diesel fuel, and even nuclear waste was left in the abandoned tunnels to be swallowed up by the Arctic ice for good, as far as the Defense Department was concerned.

Of course, “for good” is a long time, and as we’ve come to find in the decades since, ice sheets aren’t nearly as permanent is today’s world as they may have once seemed. Thanks to climate change, the ice covering the remnants of Camp Century continues to shrink, and experts assess that all of America’s Iceworm secrets will be laid bare by 2090 — prompting ongoing debate about who will ultimately be responsible for the cleanup.

“It’s just a matter of time,” says Mike MacFerrin, one of the authors of the 2016 study that first exposed the problem. “When the water reaches these wastes and gets to the coast, then we’ve got a big problem.”