Dr. Martin Luther King, Jr., said, “There comes a time when one must take a position that is neither safe,... 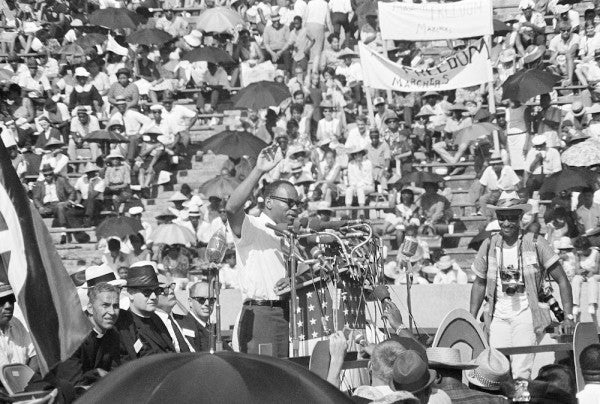 Dr. Martin Luther King, Jr., said, “There comes a time when one must take a position that is neither safe, nor politic, nor popular, but he must take it because conscience tells him it is right.”

King inspired millions of people from all backgrounds and every political persuasion. Even Fox News’ Bill O’Reilly has said that King’s commitment to love, values, and peace placed him squarely in the “hero” category, noting, “Today the USA badly needs another Martin Luther King, Jr.”

But as we remember what this iconic, unifying man stood for, we should also remember those he stood with; some of whom were veterans of our armed services. The name James Meredith is one that isn’t as immediately recognizable as King’s, but his efforts to fight for civil rights were no less heroic.

Picture the states of the old Confederate South in the early to mid 20th century. Jim Crow laws were the norm, minorities were marginalized, and racism was an accepted and institutionalized part of society. Many African Americans were wrongly accused and convicted of criminal offenses, targeted for hate crimes, faced discrimination and bullying during elections as well as in work and school environments, and lived in fear on a day-to-day basis. The military, fresh off its major victories in World War II, had only recently been integrated. It’s hard to believe, but even the Pentagon, erected in the southern state of Virginia in 1942, was first built with segregated facilities. Indeed, Virginia law required it.

This was the backdrop as the Civil Rights Movement led by King began to force the government to take notice of legalized prejudice in the 1950s and 1960s. Enter James Meredith.

James Meredith walking to class at University of Mississippi, accompanied by U.S. marshals.

Officially from African-American, Scots, British-Canadian, and Choctaw heritage, Meredith grew up attending segregated schools in Mississippi. His parents did their best to the shield their young son from rampant racism, but they couldn’t protect him from it completely. On a train trip from Chicago with his brother, the two were directed at one point to give up their seats to white passengers, and ended up standing in the back of the car. This act of bigotry happened in Memphis as a result of Tennessee state laws, and it infuriated him. It was at that moment that Meredith decided he would do whatever he could to fight for the civil rights of minorities.

Short of money to attend college and feeling the need to participate in something larger than himself, Meredith enlisted in the Air Force in 1951, which at the time was generally considered the “least racist” of the armed services. The idea was that serving in uniform could help him gain financial opportunity through the G.I. Bill. Meredith served in Kansas and Japan, rose to the rank of sergeant, and left in 1960 after nine years. While he was serving and traveling, he took college classes and upon his discharge enrolled in college at Jackson State in Mississippi. He soon applied to University of Mississippi (Ole Miss), which did not admit black students at the time. Meredith was accepted, but barred from attending classes and recognized the rebuff as his first opportunity to fight legalized bigotry and racism.

Meredith took his case to court and after several rulings upholding the university’s decision to deny his admission, his case landed in the U.S. Supreme Court, which ruled that, legally, he had the right to attend. The controversial verdict sparked riots at the Oxford, Mississippi, campus, killing two people and injuring scores more, causing President John F. Kennedy to order troops to Mississippi to end the violence. The governor was ordered to allow Meredith to start attending classes, and he graduated with a degree in political science in 1963. Meredith had secured his place in history as the first black student to attend Ole Miss.

Meredith is also known as the organizer of the March Against Fear in 1966, which was his personal effort to bring awareness to continuing racism despite the passage of federal civil rights legislation in 1964 and 1965. It was also his attempt to encourage black citizens to snub the intimidation that had traditionally kept them from the polls, and get out and vote. Meredith wasn’t interested in major recognition or political gain and because he didn’t want significant media attention, he only invited black men to participate. The march, which began fairly quietly, cut a 220-mile path along Route 51 from Memphis, Tennessee, to Jackson, Mississippi. However, on the second day, a white gunman named James Aubrey approached Meredith from a concealed position on the side of the road and opened fire, shooting him three times with a shotgun. He was rushed to the hospital and miraculously survived, but the assault became a battle cry for other civil rights organizations across the nation.

In the wake of the assassination attempt on Meredith’s life, several other civil rights leaders continued to lead the march toward Jackson, including King, Stokely Carmichael and Floyd McKissick. On June 25, Meredith rejoined the march and the next day, he led more than 15,000 people into Jackson.

“I wanted to change the whole thing that America was about,” Meredith said later in an interview with the National Visionary Leadership Project.

In later years, Meredith ran for political office as a Republican and served on the administration of Jesse Helms, the five-time Republican senator from North Carolina, but few things compared to his role in integrating University of Mississippi, or organizing the March Against Fear.

Meredith is alive today, but still insists he has never identified as a member of the Civil Rights Movement, only as an American who demanded his rights be honored as outlined in the U.S. Constitution — just like any other American citizen. Many of the shotgun pellets from the assassin’s attempt on his life remain in Meredith’s body to this day, a constant reminder of the risks he took to ensure that all citizens were afforded their legal rights as Americans.