A Marine recounts how one two-minute experience 54 years ago in the jungles of Vietnam changed his life forever. 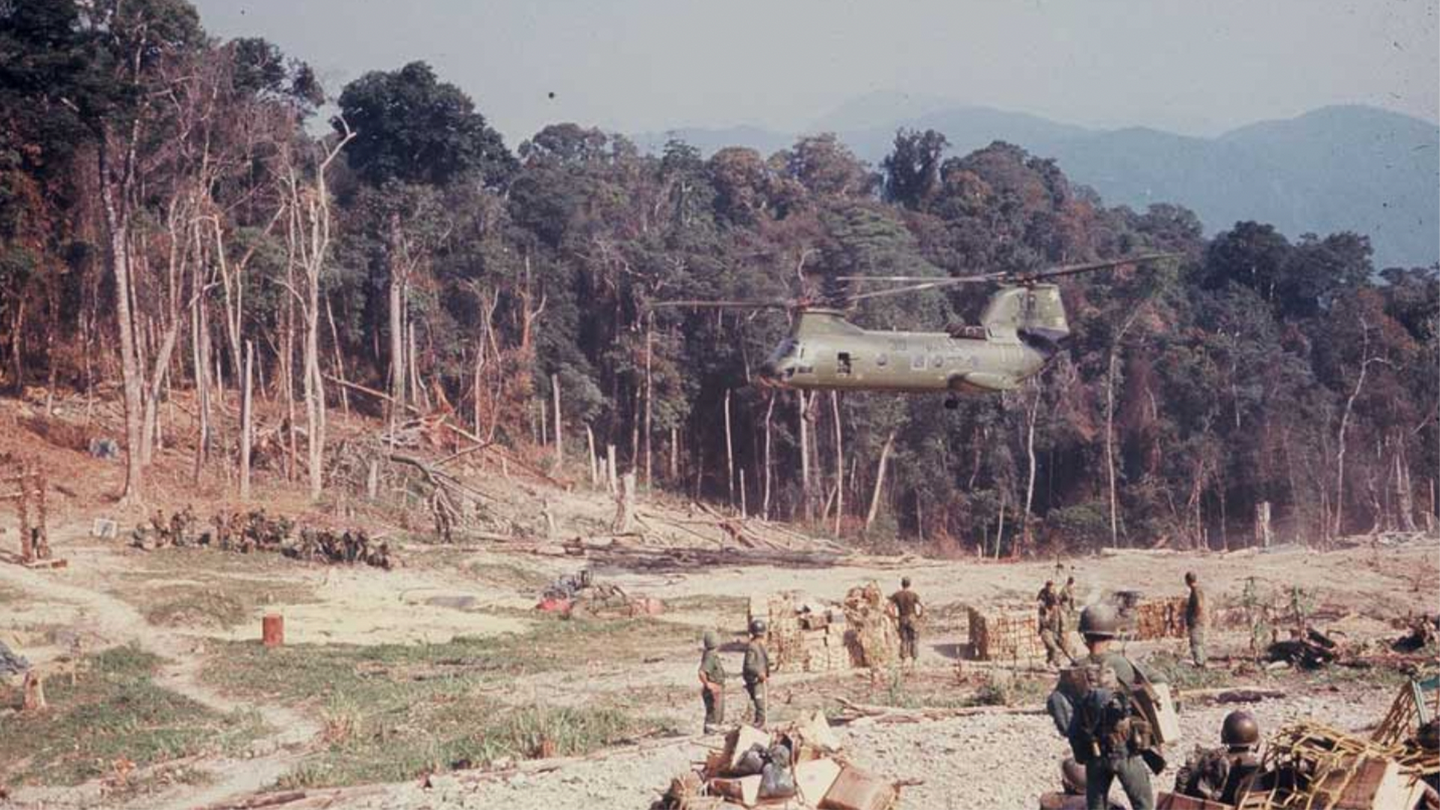 Ask any Marine if they can remember the first day they actually became a Marine and you likely will be told it was boot camp graduation day. Whether it was Parris Island or San Diego, only when the senior officer in the graduation program proclaims the graduates “Marines” did the title apply. For officers, it would be a similar graduation from Officer Candidate School when their second-lieutenant butter bars were pinned to their uniforms.

The designation could not come at any time before that, and no matter how well the recruits or officer candidates did at the various stages of training that preceded graduation day, if they didn’t graduate, they were not Marines.

But as many Marines will also tell you, there are other defining moments in the journey to becoming a Marine veteran that eclipse the boot camp experience. These include the baptism by fire, when Marines enter combat for the first time and learn how they will react when the enemy shoots directly at them.

For me, that moment came on June 1, 1968, during an initial assault as we inserted troops into an area south of Khe Sanh where the North Vietnamese Army (NVA) was building a road under the cover of a triple canopy jungle. I responded appropriately and survived, yet while that was a personal milestone, there was something missing. Even if I couldn’t articulate it, I felt it.

Two more months would pass before I filled in that gap, even though those two months included my first medevacs, reconnaissance team insertions and emergency extractions, and night flights into hot zones—the gamut of missions that helicopter crews face in war.

During the summer of 1968, the 1st, 3rd, 4th, and 9th Marine Regiments operated in northernmost I Corps and along the demilitarized zone between North and South Vietnam, and opened new firebases south of Khe Sanh near the Laotian border, including landing zones Torch, Robin, and Loon. By mid-August, I had completed nearly 100 missions as a door gunner in CH-46 Sea Knight helicopters in squadron HMM-161 (military helicopter transport squadron), many in that area.

Although my baptism by fire had occurred two months earlier in this same area, and it now was August, this day was different. While the initial assault in June had been the responsibility of the 4th Marine Regiment, later in the summer, elements of the 1st and 3rd Regiments also operated in the area. I could only tell which regiment we carried if the Marine infantrymen had written their unit identification on their packs, which they often did.

The reception we would receive when entering a hot zone was a toss-up, as the NVA was sly and often changed tactics. At times, they opened fire on the lead aircraft—“birds,” as we referred to them—and at other times, they waited for later arrivals who might be lured into thinking the zone was free of the enemy and might possibly be caught off guard by a burst of hostile fire.

On this particular day, they chose to open fire right away. I flew starboard (right) gunner in the fourth aircraft in the flight, and I had a brief-but-ever-so-appreciated advance warning of what waited for us. The crews in the earlier flights had pinpointed the enemy positions in a gully flanked by two ridges on the northern side of the zone.

As soon as the target section came into sight, I opened up with my Browning M-2 (Ma Deuce) .50 caliber machine gun. We usually flew with 100-round boxes of ammo attached to the side of the machine gun with a bungee cord. At a rate of 500 rounds per minute, I emptied the first box in slightly more than 12 seconds.

I should point out here that in the years after Vietnam when I met grunts at veterans events, they often said they hated being forced to sit in a helicopter waiting to land, unable to join in, while the enemy, the gunners, and the crew chief were firing. It was strange for us, too, because we rarely saw those grunts again or heard what they encountered on the ground, or whether our fire had been effective in giving them sufficient time to find cover and turn their fire on the enemy.

Regardless of which unit we worked with, any assault was nerve-wracking for those who wanted to fight but—due to safety concerns—had to sit quietly until we landed and lowered the ramp. This probably explains the actions of a grunt sitting right next to my machine gun that day in August.

When I ran out of ammo in the 100-round box, instead of loading another 100-round box, I reached into a much larger box below the gun mount, grabbing one end of a 500-round ammo belt.

As I reloaded, I noticed the grunt stand and turn toward me. I cocked the .50 and began firing—all this happening in mere seconds—as he grabbed the ammo belt and began to feed the machine gun with a smoothness that instantly spoke of long experience. Out the corner of my left eye, I also saw the crew chief grab his M-14 rifle, switch it to fully automatic, and start firing out the hatch on the starboard side of the aircraft, a few feet forward from my station.

The crew chief and I were about the same size—five foot seven inches or so, less than 150 pounds—and the recoil from the M-14 threw him back a couple of steps each time he fired. But he charged right back to the hatchway and opened up again, oblivious to the force of the recoil. In retrospect, it was kind of funny, but no one was laughing then. We kept firing, and I expended another 200 rounds or so. I ceased firing as we settled into the zone and the crew chief opened the rear ramp using his remote control.

I watched as the grunts charged out to take up their assigned positions in what was a quickly expanding perimeter. But just as he was to turn in the direction of the battle, the grunt who had been feeding my machine gun stopped, looked back for an instant, and flashed “Thumbs up” to me, accompanied by the biggest grin I could have imagined. Then he was gone.

In that instant, for the first time, I truly felt like a member of the Marine air-ground team. I didn’t know the Marine sitting next to my position, but he instantly reacted, and we each did our part in the brief but intense firefight. And he obviously was grateful to have a part in the action rather than sitting still, enduring what we referred to as the “pucker factor.” Much later, I realized that a similar scenario could have occurred with myriad other participants, but this moment was our time on center stage.

I have heard it said that the entire course of our lives can change in an instant, and decisions we make in that time can affect everything we do thereafter. The time spent in that firefight was two minutes—tops—yet it caused a sea change in my feelings about my role in the war we were fighting.

I’m not talking about philosophical issues here, or weighty concerns about the justification for America’s involvement in Vietnam. I am talking about the simplest of factors: two Marines, side by side, helping each other stay alive for the foreseeable future, which could be less than another minute. Nearly a year and ultimately more than 300 missions after that firefight, I returned home, went back to school, and tried to reenter society. But the America I returned to, and I hope that grunt made it, too, was not welcoming, and I endured my share of physical and emotional abuse.

In the first half of a 20-year journalism career, I was mocked and denied promotions, advancement, and pay raises by people who had never served their country and despised those of us who had. Not everyone, of course, but enough to make an impact on my life.

But regardless of what I faced in the years after Vietnam, I never forgot that moment when two Marines seamlessly took the fight to the enemy—a team that was created on the spot but worked as though we had been practicing forever—and did the job that was required. I often passed that moment on to acquaintances who needed a boost, and who needed to remember what it was like back in “The Nam.”

During my journalism career, I developed a reputation for calmness under deadline pressure, and occasionally, when asked about it, I would simply say, “No one is shooting at me.”

The success and teamwork of that moment helped me be successful in later endeavors, and the reward was far better than any medal because, from that moment on, I knew without question that I had truly joined the brotherhood of Marines, and the expanded brotherhood of combat veterans from all services. And for the first time, I fully understood—not by definition, not superficially, but deep inside me—the meaning of Semper Fidelis: Always Faithful.

Ronald Winter is a Marine Corps Vietnam veteran and author, including the recently released Victory Betrayed: Operation Dewey Canyon. He joined the Marine Corps in January 1966 and served four years on active duty, including 13 months in Vietnam, flying more than 300 missions as an aerial gunner. He was awarded 15 air medals, combat aircrew wings, the Vietnamese Cross of Gallantry, and numerous other decorations. Winter later earned degrees in electrical engineering and English literature, and spent 20 years as a print journalist, earning numerous awards for investigative reporting, as well as a Pulitzer Prize nomination.