Harry L. Chandler knows he's among the last of a vanishing breed. His fellow members of Massachusetts' Pearl Harbor Attack... 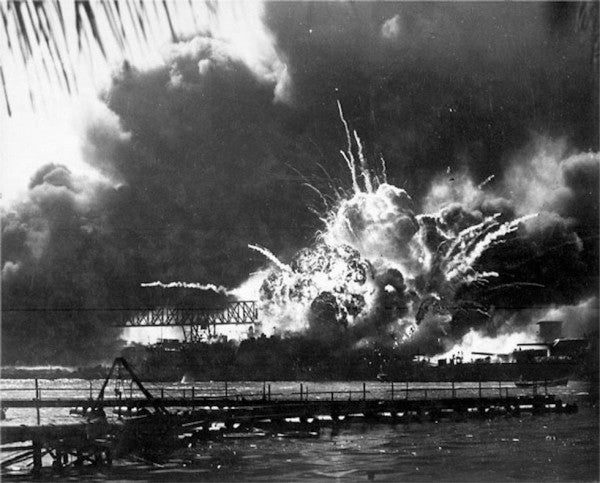 Harry L. Chandler knows he's among the last of a vanishing breed.

His fellow members of Massachusetts' Pearl Harbor Attack Veterans Post 1 are now gone. The post had its final meeting in June 2008 at the old Yankee Pedlar Inn in Holyoke, and its state organization disbanded later that same year.

His dear friend Robert A. Greenleaf, of Westfield, who was post commander, died two years ago. “What a loss,” reflects Chandler one recent afternoon.

Before and since Greenleaf's passing, most all of the Western Massachusetts veterans who were at Pearl Harbor on Dec. 7, 1941, have died.

One by one, the voices of the men, many of whom each year shared recollections of that fateful day that propelled America into World War II, have fallen silent. Charles J. Lockhart, of East Longmeadow, was 95 when he died last Christmas Day. In September, William Kostanski, of Greenfield, died at 101. Only when his family surprised him with a 100th birthday party did Kostanski relent to speak – if only fleetingly – about his experiences at Honolulu's Schofield Barracks all those years ago. For decades, he never spoke about it.

Today, on the 78th anniversary of the Japanese attack on Pearl Harbor, Chandler, who grew up in Holyoke, chooses to look to the future. “What more is there for us to talk about,” he asks. His concerns are less about the past and more about today's soldiers and the challenges they face.

“What's going on today is horrendous,” he says. “There's so much division in this country. It's terrible. Let's put it this way, we never would have won (World War II) if we had this kind of division.”

For Chandler's generation, “Remember Pearl Harbor – Keep America Alert” was a rallying cry for Americans never to forget the havoc that was wreaked on Dec. 7, 1941, and to guard against ever seeing it repeated again.

It was early on a bright, picture-perfect Sunday morning that Navy hospital corpsman Chandler had helped raise the American flag outside his barracks just moments before a fleet of enemy aircraft bore down on Pearl Harbor. Still in his Sunday “whites,” he and his fellow corpsman were hustled aboard trucks, rushing to confront the horror at Battleship Row.

By the time the attack was over, the Japanese had torn into the heart of America's Pacific fleet. Twelve ships, including three battleships, were sunk or beached; nine others were damaged. The attack killed close to 2,500 Americans and injured 1,200 more. The loss of the mighty battleship USS Arizona – now the site of a U.S. Park Service memorial – accounted for the loss of 1,177 lives alone.

Jay Blount, of the National Park Service, public information officer for the USS Arizona National Pearl Harbor Memorial, says there were fewer than 50 World War II veterans expected to attend today's national commemoration at the memorial. Of those, only 13, as of Wednesday, were at Pearl Harbor on the day of the attack.

“There's no database that monitors what happened to Pearl Harbor veterans or survivors of other battles in World War II, so there is no way to say how many are still alive,” Blount says. “Based on the number of people who were here, even if the youngest who lied about their ages and were 16, they would be 94 years old today, so we assume the number is (now) in the several thousands.”

Now 98, Chandler worries about the divisiveness that grips our nation, so opposite the America of his youth. “With the support we had, it was just fantastic,” he says of his World War II experience. “The bulk of the people in the U.S. were for us.”

“I feel very, very sorry for our (soldiers) today. We were fighting a uniform, either Japanese or German. Today, they don't know who the hell they're fighting,” Chandler adds. “(It's) no wonder they come home and are all screwed up. When a woman is walking towards them, they don't know whether she will blow herself and them up, or a child the same. It's terrible.”

The national Pearl Harbor memorial averages 1.8 million visitors each year, according to Blount. “This is a place of monumental importance in American history. I think the USS Arizona is one of those iconic places in the U.S. that people from around the world come to visit.”

While the numbers may fluctuate depending on whether it was the 75th anniversary, when there was major interest in the memorial, or last year's 77th anniversary, “the interest and desire of people to come here has remained steady,” Blount said.

Rick Kostanski, of Deerfield, who is 60, is one who believes the lessons of Pearl Harbor and those who served there should never be forgotten.

His great-uncle, William Kostanski, was a role model for him as he grew up in the Franklin County town of Montague. “I think he was an example to everyone in our family,” Kostanski says.

The elder Kostanski was serving with the Army's 19th Division at Schofield Barracks, situated about 35 minutes north of Pearl Harbor, when it, too, was decimated by the Japanese that December morning.

At last year's party in his honor, he recalled seeing the face of at least one Japanese fighter pilot as the enemy planes bore down. “I don't remember if I was scared or not,” he said. “When you are 18 or 22 years old, you're not too sharp. You're gung-ho.”

“He had a great healthy life,” his grand-nephew says. “He had a great work ethic, was a hard worker and in great shape until the end. To me, he was an inspiration, not only in his lifestyle but being a veteran who was at Pearl Harbor and made it through. They truly were the Greatest Generation.”