A video making the rounds online shows a previously unseen threat to the cycle of operations for the M-16, AR-15... 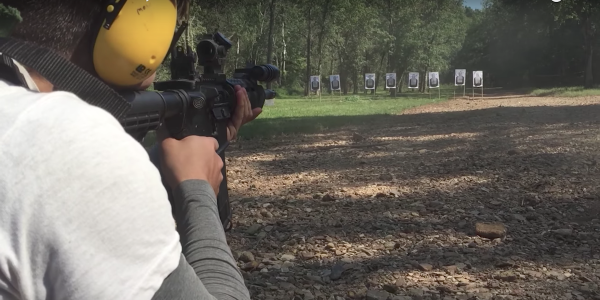 A video making the rounds online shows a previously unseen threat to the cycle of operations for the M-16, AR-15 — bees.

The video shows a shooting range for an organization called Regular Guy Training LLC, and was posted to its popular gun enthusiast YouTube channel. The shooters were given a course of firing five rounds standing, five rounds kneeling, and five rounds in the prone position, with a reload between each position.

The shooter takes five well-aimed shots in the standing position, drops to a knee, executes a pretty good speed reload, and fires two shots kneeling before his weapon jams.

He immediately takes corrective action — tapping the bottom of the magazine to ensure it’s properly locked into the weapon, racking another round, and attempting to fire — but nope, the weapon doesn’t fire.

Then he seems to assume it’s a double feed, a problem the M-16 is oft-afflicted with, where two rounds feed from the magazine into the chamber at once. So he ejects his magazine and sweeps his fingers up the magazine well to clear the obstruction, as well as pulling the charging handle back.

Only after he taps the forward assist to help push the bolt farther into the chamber does the weapon fire a round again. By that time everyone else has finished shooting, and the cameraman and our shooter are both baffled at what could have created the jam that nothing could clear.

They take the weapon apart, which takes more effort than it should, and struggle to figure out what is stuck in the chamber.

The suggestions pour forward. One person thinks it’s a stick. Someone else thinks it’s metal shavings.

Only when the light hits it the right way does someone shout, “That’s a fucking wasp!”

That’s going to be a real pain in the ass to clean.

The video was originally posted in September 2016, but was just on the front page of Reddit this week.

Have a look below.