There’s Something About MOLLE: A Guide To Making Your Civilian Life Tacticool

Since the first Revolutionary-era militias were born, the American troop has sought to be the best-equipped, best-trained, and most effective... 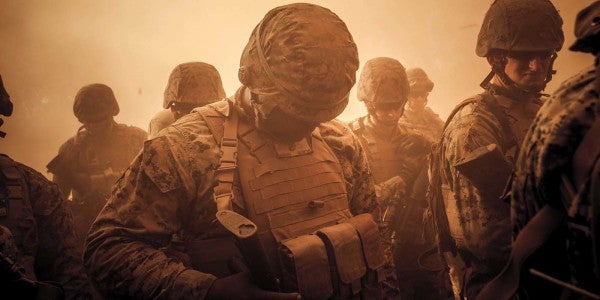 Since the first Revolutionary-era militias were born, the American troop has sought to be the best-equipped, best-trained, and most effective troop ever. Weapons, munitions, food, water: The average U.S. hero can pack most of it on their body for a day off the post, or a week rucking through the mountains.

Just how do we manage to strap a rifle, a couple grenades, and a log of dip to ourselves and keep them all in reach in the event of an emergency? With Modular Lightweight Load-carrying Equipment (MOLLE). Since its inception in 1997, MOLLE has found its home on most military bags and every inch of wearable space on your average troop. The loop system gives troops the ability to properly place all their important equipment for quick access in emergency. For example, I was able to access my smokes in a well-placed grenade pouch in less than two seconds. (Not like they trusted me with anything that explodes, anyway.)

As MOLLE dominates the battlefield, so does it dominate the section of the post exchange dedicated to selling useless gear to deploying boot soldiers who think they need a Rambo Ka-Bar to strap to their gangly chests. But the dirty not-secret is that you'll see more MOLLE while going to the post movie theater than you'll ever see in combat. On patrol, being able to set up your first aid kit, your ammo and other accoutrements of destruction can mean the difference between life and death, in the civilian world they're just telling everyone in close proximity you shop exclusively at Clothing and Sales.

Bags I'm used to, but I didn't realize just how far people went with this stuff. Want to know how to MOLLE-fy your entire existence? Read on:

TacPants. Like regular man pants, but manlier, I guess

Who needs 5.11 when the tacticool in these pants goes all the way up to 11?Kitanica

Most of the MOLLE gear the military gives you is upper-body oriented. But you've got two good legs filled with space for more loops. Why has the DoD forgotten about out our load-bearing thighs?

A company called Kitanica solved that problem with the Kitanica Generation II Tactical Pants. This is the second lieutenant of pants. I can hear them getting lost on a flat land-nav course that covers a square quarter mile. They cost $225, so hopefully there's a layaway program for your local Pfc. to toss them in the back of his new $25,000 Ford Mustang.

What does all that money get you? Twelve pockets, left-side MOLLE, right-side mag pouch, and expandable rear dump pockets, so you can shit on the go, I assume. Here's also hoping the rear is reinforced for when someone gives you a massive wedgie for wearing this shit.

Buy these for the person in your life who loves Bill O'Reilly's Killing series of books, or if you know someone who is a CIA officer in Nicaragua in 1982.

Tactical baby gear. Never has masculinity been so fragile

God help you when that drop zone's hot.Tactical Baby Gear

Look guys, I get it. Having a baby? That's what chicks do. And you're no chick. You're a man with manly shit you gotta do, like beers and steaks or whatever it is you do when you're sad about not being 21 any more. But it's 2018, and you gotta help raise a kid in this brave new world where wives expect you to do things beyond gaming and beard-cultivating.

Worry not! There's all kinds of baby bags out there that won't damage your testosterone levels. Proclaim your complete dadness with a MOLLE baby bag and Velcro patches.

As a dad of a toddler and as someone who has fussed with my MOLLE setup to make sure I could access both my magazines and my jerky on a patrol, I'm all in on this. Easy-to-access outer pouches that I can move around as the mission dictates? (Day at the park: Move snacks to the outside areas for quick access; petting zoo: Keep the snacks inside, with quick access to hand sanitizer on the exterior.)

Not shown: the dadbod that results as soon as you assemble, disassemble and assemble your kid-rig again, testing constantly for weight distribution and ease of access.

The beer shingle. For when your MOLLE needs a koozy

For the mommy kangaroo inside every beer-loving vet.

The website Tactical Grilling has a wide range of Universal Camouflage Pattern products for the proud troop who needs to tell everyone at the cookout they're a veteran, but occasionally might be in the middle of drinking a beer and unable to talk about it. UCP is a good camo pattern though, as it makes a troop virtually invisible in any gravel parking lot or grandmother's couch:

One of TG's tactical doodads is the beer shingle. On the battlefield, these shingles are used to carry extra magazines for your rifle. But when you've traded the battlefield for the backyard and are still inexplicably wearing an assault vest with front-facing MOLLE, you can get this to carry three (3) beers.

Now if there's one place that I want to have three beers while I'm grilling, it's grill level, right next to the heat source, for extended periods of time. Bud Light already tastes like pee; might as well get it to the right temperature.

Pick this up for the soldier in your life who likes to do their alcoholism in the fresh air.

When your other dog is an AT-AT.

Have you ever gone out on a hike with your dog and found yourself suddenly in the middle of a pitched firefight against ISIS operatives? Did you wish that maybe your dog would stop being so useless, grab his sidearm, and move into flanking position to draw fire? Don't just wish it. Get Fido a “tactical training MOLLE vest dog harness,” and hold your questions about open carry for dogs till the end of this post.

I can't guarantee a pocketful of Milkbones will get your dog ready for Ranger school, but at least you can stash an extra mag pouch on him when the revolution comes and your MOLLE pants are already too full.

I do have a dog backpack that I put on my Pyrenees mix, because I can toss a couple bottles of water in it and it helps wear her out on our walks. This certainly doesn't require me to purchase a load of weird gear like grenade pouches or whatever. Also it would be embarrassing if my dog got yelled at by retired working dogs about stealing valor.

This is perfect for making your dog look like a gigantic dork.

Tactical scabbard. Put a gun on your gun, if you like

Perfect for the LRRP who likes to LARP.

So you've managed to find something to stick in every loop on your MOLLE gear. Everything — spare magazines, seat-belt cutter, ranch-flavored sunflower seeds — has been positioned perfectly. You look down at your rifle and realize with disgust that your M4 isn't outfitted with the latest in assault rifle MOLLE. This will not do.

The Tactical Scabbard from Opsgear solves this. Your rifle will never be both more and less accessible than when it's snapped into this MOLLE chrysalis. Now you can hang even more useless gear off your back as you struggle to unclasp the retaining straps in the middle of an ambush.

Personally, outside the wire, my rifle was always attached to my body armor with a couple of carabiners so it was always at the ready, but I could have both hands free if needed to do other tasks without putting my rifle down. If you can't find basic climbing equipment or even a rifle sling on Amazon for some reason, this scabbard is for you.

Wearable phone mount. So you never miss an episode of The Bachelor on patrol

“No enemy contact for the next hour. Empire's on, yo.”

We've all been there. You're 3 hours deep into a 12-hour guard posting on your base in the middle of nowhere. The dip can is low and Rip-Its are in short supply, but you do have your phone and some new episodes of Rick and Morty to watch. But how can you effectively keep yourself pointed in the right direction with all your gear and watch your phone at the same time?

You MOLLE that shit directly to your chest, that's how.

Juggernaut Defense has revolutionized the future of wearables by dispensing with all that smart-watch garbage and just strapping your phone directly to your chest. No longer do you have to choose between patrolling and swiping right on Bagram sweeties: You can do both! Juggernaut offers a wide array of ways to walk around with a phone attached to you, though I will admit it's less dorky looking than dad's cell phone belt holster.

The last necktie you'll ever buy your Dad. Because he'll disown you.

For when the target you need to paint is your dong.

Veterans have a way of letting you know that we're veterans. Some carry backpacks with military camo patterns rather than getting a ruck that's, you know, comfortable. Others like to talk incessantly about their service (on podcasts, even). You'll find plenty wearing Velcro flag hats or OEF/OIF swag, as if the Kandahar PX vomited every ironic T-shirt and beer koozy into their laps and then rubbed their faces in it.

But say you're a businessman now. How do you let clients know you're not just a professional, but a “silent professional”? With a tactical tie.

I think the worst part of this “tactical” tie is that it's still an actual tie. Which means someone can grab it and choke the shit out of you, unlike with a clip-on. Though you probably deserve it, because I'm sure you were fucking around with that laser pointer and shining it in someone's eye. Who even uses those anymore, other than cat owners and mid-grade officers hawking their Powerpoint decks?

You put your dip in it. No big whoop.

I don't even know with this, but at least the target demographic is there: Troops love to dip, probably because you can get that wonderful nicotine hit without losing time on your run. The same company also advertises something called a Breech Can, which is a $60 airtight, waterproof can that's just the right size for a can of dip.

Punish your gums *and* your wallet in this one simple move.

That's a small $60 can. I don't dip, so I don't know if your cans getting crushed on patrol is that big of an issue, but certainly this will keep you and your chaw safe. Get this for the Pfc. in your life right before a deployment, along with a log of long-cut, and they'll be yours forever.

That's quite a loopy universe of loop systems. MOLLE is great, but be careful around its addictive properties. The government says MOLLE can produce “a surge in euphoria” and “triggers hormones that affect sexual arousal and trust.” That's molly, the drug, actually, but the principle holds for tactical gear, too.

Unless you're Sebastian Gorka, trying to slap 40 pounds of insane equipment to to your body before you drive the 'Stang to Subway for lunch, you'll be fine with a regular backpack or messenger bag.

On the other hand, you can fit a whole bag of jerky in that MOLLE grenade pouch.