Trump And The Army Share A Birthday — What Else Do They Have In Common?

Happy birthday, Donald Trump! You’re 71 today, the oldest person ever elected president of the United States. And as commander-in-chief... 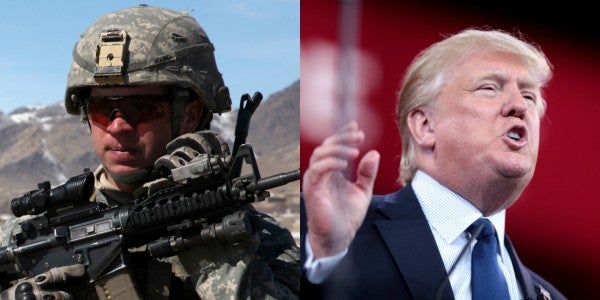 Happy birthday, Donald Trump! You’re 71 today, the oldest person ever elected president of the United States. And as commander-in-chief of the nation’s armed forces, you also happen to share a birthday with one of the mighty service branches under your command: the U.S. Army, which is celebrating 242 years of protecting the freedoms of American citizens.

But what else do these two titans of geopolitical power have in common? Let’s explore in a side-by-side comparison, shall we?

Trump: President of the United States of America

Length of service to country:

Trump: Sex in the 1980s, which Trump once called “his own personal Vietnam.” (Trump avoided experiencing the real Vietnam thanks to five deferments)

Trump: Who cares? After all, Trump has said he knows “more about ISIS than the generals do, believe me,” even though he just handed authority over U.S. troop levels in Afghanistan over to Secretary of Defense James Mattis.

Trump: Air Force One, Marine One, and a golf cart