“We’ve all seen them before. The cans, small shots and uniquely packaged drinks that promise to give you an energy... 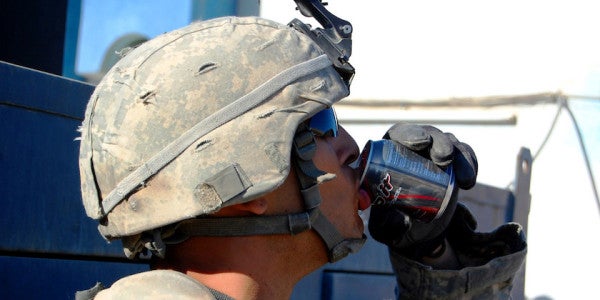 “We’ve all seen them before. The cans, small shots and uniquely packaged drinks that promise to give you an energy boost during the most important parts of your day. At first glance, it seems like a great idea: chug it down and get reinvigorated for the day. But, if you go beyond wanting to simply stay alert and begin to overindulge, you could wind up doing some serious harm to your body.”

So begins a new Department of Defense press release entitled “The science behind why you should stop chugging so many energy drinks.” As its title implies, the release encourages soldiers to avoid drinking tons of caffeine — specifically, more than 200 mg every four hours.

It’s no secret that soldiers consume more caffeine than any other mammal on Earth. Once, in Iraq, I drank so many Wild Tigers that it felt like an actual tiger — a wild one — was ripping apart my guts from the inside. I wouldn’t wish that on my worst enemy. So, yes, the DoD is right. In high doses, caffeine can be dangerous. But we all know that. Too much of anything can kill you, or at least give you crippling diarrhea.

Of course, the DoD is just trying to do the right thing. It’s not banning energy drinks (yet). It’s just making soldiers aware of the very real risk they run when they decide to pound a case of Rip Its before breakfast.

But in the military not consuming tons of caffeine can also cause serious harm to your health. Symptoms include, but are not limited to, bullet and shrapnel wounds, getting the shit smoked out of you for passing out on guard duty, falling asleep behind the wheel of an MRAP, and losing your will to live after back-to-back 12-hour patrols on two hours of sleep. Soldiers don’t “chug it down” just for the hell of it. They do it out of necessity. For their health and sanity. T0 increase their chances of making it home in one piece.

Although well-intentioned, the DoD press release seems to ignore that reality, which is why I’ve included key portions of it below with a few insightful notes of my own. Before we proceed, let me make one thing clear: I am not an expert on energy drinks or chemistry or the human anatomy or really anything for that matter. I’m just a guy who drank way too much caffeine in the Army.

“Energy drinks can cause drastic side effects.”

Am I the only one who gets thirsty reading this list of deliciously dire side effects? If my heart doesn’t feel like it’s about to explode out of my chest like a stripper jumping out of a birthday cake, then count me out. I want the hard stuff. The stuff that’s going to make my eyes bleed. And what’s with the DoD’s sudden concern for my bowels? Everywhere the Army sent me, and everything it fed me, irritated my bowels. They’re beyond salvation.

“Energy drinks are loaded with sugar. Some cans pack a punch of 27 grams of sugar — two thirds of the recommended daily maximum for men, and 2 grams more than the maximum doctors recommend for women. Some service members can double or even triple that if they drink more than one energy drink per day.”

Oh, no! My sweet tooth has been activated. You know what else has been activated? My willingness to crawl out of my sleeping bag after two hours of sleep and spend the next 12 hours patrolling through an insurgent-infested village.

“They can make you pack on the pounds.”

“All of that extra sugar can cause your blood sugar to increase. Even the sugar-free versions of energy drinks can lead to weight gain, as research suggests artificial sweeteners may raise blood sugar, too.”

In Afghanistan, I drank 12 Rip Its a day, every day, for an entire year and came back 40 pounds lighter than I was when the deployment began. That was the one and only time in my life I’ve ever been able to see the six-pack I’d always known was there. The second I got home it disappeared forever, and now nobody believes me when I tell them that I was ever not fat.

That’s interesting. However, according to my calculations, the formula is actually this: Energy drinks + alcohol = a delicious cocktail. Have you have ever mixed Rip Its and vodka? Or Wild Tiger and rum? No? Well, you’re missing out…on the time of your life!

“As caffeine is the major ingredient in energy drinks, the CDC reports service members who drink three or more energy drinks per day were significantly more likely to report sleeping fewer than four hours per night. They were also more likely to report disrupted sleep and other illnesses. Research indicates service members who drank three or more energy drinks each day also had difficulty staying awake during briefings or on guard duty.”

If you’re having difficulty staying awake on guard or during briefings because you only got a few hours of sleep last night, there’s an obvious solution to your problem: drink more energy drinks. Come on, people! It’s not rocket science.

“You really don’t know what’s in them.”

“One area that’s concerning…is the ingredient taurine. The chemical compound is an amino acid found in animal tissue. Many energy drink makers purport the ingredient will enhance mental and physical performance. Researchers with the Department of Veterans Affairs Medical Center report little is actually is known about taurine’s neuroendocrine effects.”

As far as I know, and this is based on rumors I heard when I was a private in basic training, so this information is probably 100% true: taurine is extracted from the testicles of a large angry bull. That’s why it makes you feel strong and powerful, just like a bull, and why I drink it every day. Also, we know exactly what’s in energy drinks. The ingredients are on the label! Do your research, DoD.