America’s Army is looking more like America, warts and all. The ground service, looking to enlist nearly 20% more recruits... 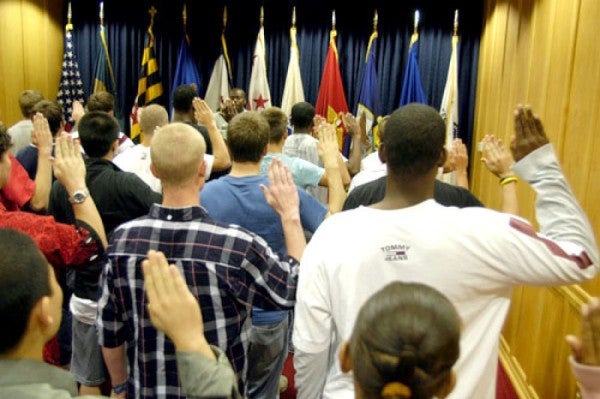 America’s Army is looking more like America, warts and all.

The ground service, looking to enlist nearly 20% more recruits than it did last year, is relaxing ASVAB/AFQT scoring requirements and easing the process to get a waiver for past marijuana use.

Army officials hope to bring 80,000 new soldiers on board in the 2018 fiscal year, a significant increase from the 69,000 recruited in fiscal 2017, USA Today reported Oct. 10. Hitting those numbers is no small goal in an economy with 4.5% unemployment while hotspots for U.S. deployment pop up all over the world.

To pick up the slack, the service is increasing its enlistment of so-called “Category Four” applicants: those who scored between the 10th and 30th percentile on the Armed Forces Qualification Test. DoD regulations permit the services to have no more than 4% of their force made up of Cat 4 service members. The Army’s share of Cat 4 recruits more than tripled last year, USA Today shows:

“We made a conscious decision to bring in some more Category 4 soldiers during the months that it is most difficult for us to meet the training seat requirement,” Gen. Jeffrey Snow, head of Army Recruiting Command, told USA Today.

The service also implemented a rule change to increase the number of marijuana waivers granted to aspiring soldiers. Such waivers previously required a sign-off from a flag officer; now, a recruiting command O-5 can approve them. As a result, USA Today reported, Army pot waivers more than doubled last year, to 506 from 191 in fiscal year 2016.

To be clear, the Army hasn’t suddenly become more chill about weed — enlistees still have to promise not to violate the military’s regs against drug use in the future — but they are concerned with saving bonus money, which has exploded in recent years — and accessioning recruits with drug waivers, who don’t typically qualify for bonuses, helps the bottom line:

Don’t expect the standards to stay this relaxed forever; recruitment guidelines shift as wars and economic conditions change. But for those otherwise-qualified recruits who expected reefer-enjoyin’ to disqualify them from serving their country: Smoke ’em if you got ’em. Just give ’em 30 days to leave your system before heading to MEPS.