I joined the Army at 19, straight out of a grocery store job in California and completely clueless about military... 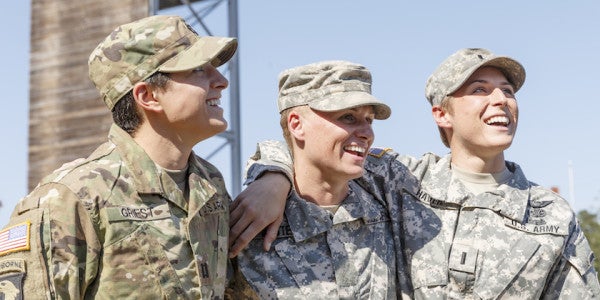 I joined the Army at 19, straight out of a grocery store job in California and completely clueless about military life. Looking back there is plenty I would have done differently, like focus on my military skills as much as I did on my MOS skills. When I deployed to Iraq and embedded with infantry units during combat operations I learned real fast that qualifying with my rifle did not prepare me for combat missions, but I managed by watching and copying what the guys did. Being a woman attached to all-male units also required a delicate balance of professionalism and friendliness, something the first women in combat arms units will soon learn.

Despite what many would have us believe, women have served and currently serve in combat arms around the world. Over the summer I helped compile the“Combat Integration Handbook: A Leader’s Guide to Success.” It provides guidance to leaders on how to successfully navigate gender integration in their combat units, and includes a “Servicewomen's Smart Card” for women joining combat arms. The Smart Card is based on advice gathered from more than 30 hours of interviews with women who served in cultural support teams, attached to Special Forces units in Afghanistan, as well as reports from women who integrated combat units in Canada and other countries.

We’ve distilled their advice into the following 10 tips for success for women in combat arms:

1. Be prepared to prove your physical and technical capability.

For women in combat arms proving they belong will mean, first and foremost, being as physically capable as their male peers. When men show up they are assumed to be capable but women are not. Past experience has shown physical ability is the main metric by which you will be judged. As a woman, you will likely have to spend more time doing physical training, both at the gym and running, to achieve parity with your male colleagues. It’s just a fact but it’s not an insurmountable obstacle. Beyond proving yourself physically, you must also prove yourself technically. Again, men are assumed to be competent while you will constantly have to practice and prove your MOS skills, even if it means, as one cultural support team member did, practicing disassembling and reassembling your weapon system 20 times to make sure you are in an acceptable time window. Your end goal is to be the best soldier in the unit, not an average soldier.

Related: How I Earned My Ranger Tab »

2. Remain steadfastly professional at all times.

As men in your unit adjust to seeing you as a fellow soldier and not as a “female,” maintaining a professional demeanor will alleviate any potential awkwardness or sexual tension. Remaining steadfastly professional as everyone works through the initial phases of integration will avoid future problems and embarrassment.

3. Go out of your way to get to know your team.

The quickest way to bond in garrison is to show interest in the activities of your fellow soldiers. Ask about their families, backgrounds and hobbies. Take part in unit and team social activities and sports days. Don’t self-isolate. Remain professional, but friendly.

4. Be more than average. Work on being the best.

Many women in the military face the unfair reality that they are judged more harshly than men. Women who previously integrated units have said that average might be enough to get by for the men, but women will have to be better to be judged men's equal. You will have to train better and train harder. Remember that you had the grit to enter combat arms and get to this point, so believe in yourself.

5. Don’t allow anyone to do the work for you, even if they’re trying to be helpful.

This is another key to success that might seem obvious; however it is a bit harder to navigate. You will have to reject “helpful offers” from the men in your unit to carry your equipment, take an extra break or carry the lightest load. Don't allow anyone to do your work for you. Pull your own weight and prove that you belong.

6. Be confident and assertive.

In combat arms, confidence and decisiveness is highly valued. Speak up. As one cultural support team member advised, “Don't be a sheep in a wolves den.” This also means that when somebody crosses the line with inappropriate comments you will have to address them immediately, but offline. Be direct, low-key and professional.

7. Stay calm, even when you know people are trying to test you.

Some of your male colleagues don't want you there and they will be obvious about it. Others will simply test you. Don’t let them see you rattled. While having a thick skin will be necessary, you also don’t need to adopt behaviors to fit in that are not in keeping with your true personality. Have the courage to call out offensive and unprofessional behavior.

Remember you are one of the first and under intense scrutiny. A cultural support team member explained that men in your unit will form first impressions about women in the military from you. This is part of the pressure that comes with being the first. You are a role model. Take time to consider who you are, what your beliefs and values are, and decide what you will stand for and what you will not tolerate.

9. Beware of rumors and gossip.

Military units are notorious for gossip, and combat arms is no exception. Women have found they are subjected to untruthful rumors and gossip and that their sexual activity is under a microscope. If you engage in a relationship, be discreet; keep it away from work, away from fellow soldiers and off social media. And never, ever participate in gossip about other soldiers, as rumors and gossip can ruin team and unit cohesion.

10. Build and maintain a support network.

It's not easy being first, it is isolating and you will get frustrated and lonely and want to vent. Remember your professionalism and pick the time, place and audience carefully before you “go off.” Make sure you have a close, trusted circle of friends that is supportive. Keep in touch with other women going through the same experience so you can share perspectives and offer each other encouragement and advice. Seek out higher-ranking women as mentors if you can find them.

Canadian women who integrated combat arms units more than 20 years ago found that because they were women, everything they did was scrutinized and questioned, starting with their mere presence in combat arms, to their abilities, to their sexual activity and even their mental state. A truth they faced was that while many of the men came to eventually accept them, some never did. They learned not to see this as a personal failing, but as a reflection of their colleagues' own unbending attitudes. Women currently integrating combat arms in the U.S. will face similar challenges. These 10 rules for success will help you so you can focus on your primary job: becoming a member of the combat arms profession.

This article is adapted from the Service Women’s Smart Card in the “Combat Integration Handbook: A Leader’s Guide to Success.” The original can be found here.