6 Women Who Fought In Direct Combat In Iraq And Afghanistan 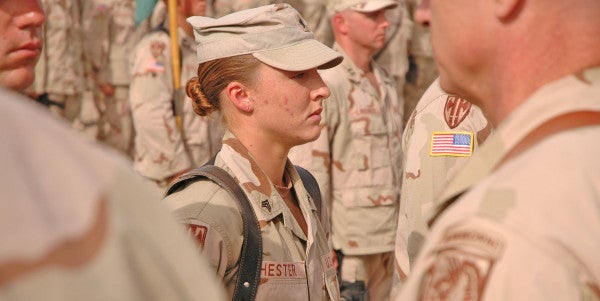 The 2016 deadline set by the Pentagon for top military leaders to review gender restrictions on combat roles is quickly approaching. Now, even the famed basic underwater demolition/SEAL training may be open to women as soon as next year.

While on Aug. 21, two women graduated Ranger school for the first time in history, it is important to recognize the other women in the armed services who have helped pave the way for servicewomen in combat roles by fighting through combat themselves. This is only a snapshot. According to the Washington Post, 160 women have been killed in action in Iraq and Afghanistan; countless more have seen direct combat.

Here are six women who faced fire in Iraq and Afghanistan:

During a six-month deployment to Afghanistan from late 2008 to mid 2009, then-2nd Lt. Rebecca Turpin led supply convoys, reported Stars and Stripes in 2012. One particular mission earned her the Navy and Marine Corps Commendation Medal with a valor device, one of the few women to ever receive it it.

The convoy of 18 vehicles departed around 4 a.m. for a mission expected to take only a day. They wouldn’t finish until more than two days later. After hitting multiple improvised explosive devices, Turpin would keep the mission going by managing the vehicle losses and keeping her men alive.

When Turpin’s convoy came under heavy fire in a small village as they proceeded with the objective, she called in a pair of Cobra helicopters and directed the air support to protect the convoy, eliminating or dispersing the threats. As things quieted down, the convoy began to leave the village, but the insurgents reappeared, beginning to fire again. Turpin, directing the machine gunners and Cobras, skillfully escaped with her convoy and completed the mission.

On March 20, 2005, Sgt. Leigh Ann Hester led a counterattack against insurgents who had ambushed her convoy while serving in Iraq. She became the first of two woman to earn a Silver Star since World War II.

Hester stopped her vehicle as the squad came under heavy machine gun and rocket-propelled grenade fire while on a routine patrol. Directing her gunner to fire, she left the vehicle to engage the insurgents on foot with her squad leader. They crossed over a berm and into the trenches from where the insurgents were firing. Hester and her fellow soldier eliminated them one by one using grenades and assault rifles.

Once the trench was cleared, Hester secured the ambush site. At the end of the engagement, 27 insurgents were killed, six wounded, and one captured.

White was attached to a Joint Special Operations Task Force in Afghanistan as part of the cultural support teams developed to better reach the populace. The subject of the New York Times best-seller, “Ashley’s War,” by Gayle Tzemach Lemmon, White was one of the first women to serve in a combat role in the U.S. armed forces. She was reportedly known to be “the heart of the team.”

When the assault force she was attached to was ambushed on Oct. 22, 2011, White was killed in action. She posthumously received the Bronze Star Medal, the Purple Heart, the Meritorious Service Medal, the Afghanistan Campaign Medal, and the Combat Action Badge.

Brown was assigned to the 82nd Airborne Division as a combat medic in Afghanistan’s southeastern Paktika province in late April 2007. She would become the first woman to earn the Silver Star in Afghanistan, and just the second since World War II, after Hester.

Brown’s unit was in a convoy headed to a leader engagement with local village elders when the last Humvee in the convoy hit a pressure-plate IED and came under complex ambush, according to Brown’s Silver Star citation.

Brown quickly reached wounded soldiers from the burning Humvee and applied crucial medical aid while more than a dozen mortar strikes landed all around her and the men she was trying to save.

The platoon sergeant used one of the Afghan National Army’s trucks to take Brown and the wounded soldiers to a more secure location, missing a mortar explosion that spit shrapnel all around where they had previously been.

“There was small arms coming in from two different machine-gun positions, mortars falling … a burning Humvee with 16 mortar rounds in it, chunks of aluminum the size of softballs flying all around,” Brown’s platoon leader, Martin Robbins, told the Washington Post. “It was about as hairy as it gets.”

Brown was later pulled from her assignment due to the combat ban on women in combat.

In March 2006, Chief Warrant Officer 3 Lori Hill engaged a determined enemy while piloting her OH-58 Kiowa helicopter in Iraq and became the first woman to be awarded the Distinguished Flying Cross for heroism, reported Time Magazine.

According to an Army press release, Hill drew fire away from the lead chopper while also providing suppressive fire for the ground troops below. A rocket-propelled grenade hit and damaged her helicopter, yet she continued to provide support to the troops on the ground until they reached safety.

After getting shot in one of her ankles, Hill then piloted her damaged aircraft back to the forward operating base, saving her crew and aircraft.

Reflecting on the events, Hill told the Army, “I was actually just glad I didn't pass out and very happy I was able to help the ground guys out, and get our helicopter down safely on the ground.”

Then-1st Lt. Jennifer M. Moreno, an Army nurse, was assigned to a U.S. Army Ranger unit when on the evening of Oct. 5, 2013, she was killed in action during a patrol that would take the lives of two additional Rangers, according to the San Diego Union Tribune.

She received conflicting orders to both help a soldier wounded and trapped at an Afghanistan bomb-making compound, and hold her position to avoid setting off another bomb in the mine-ridden area, reported Army Times in 2014.

Choosing to help her fallen comrades, Moreno moved forward, but detonated a mine that took her life.

Capt. Amanda King, commander of Moreno’s cultural support team, later wrote in a eulogy: “None of us would have done what you did, running into hell to save your wounded brothers, knowing full well you probably wouldn't make it back.”

Moreno was posthumously promoted to captain and awarded the Combat Action Badge, Bronze Star Medal, and the Purple Heart.