On March 25, 2017, President Donald Trump hosted 25 recipients of the Medal of Honor at the White House in... 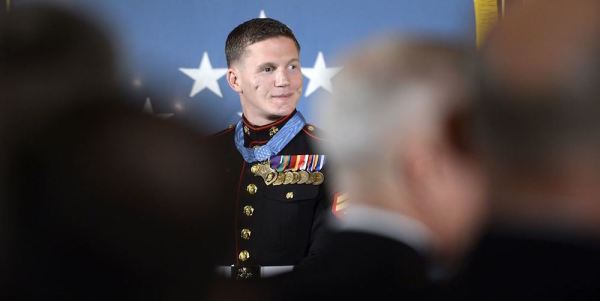 On March 25, 2017, President Donald Trump hosted 25 recipients of the Medal of Honor at the White House in recognition of the rarely celebrated Medal of Honor Day.

But being awarded the nation's highest military award doesn't happen often. The medal has been conferred just 18 times after more than a decade of combat in Iraq and Afghanistan.

Many recipients lose their lives in the act that the medal recognizes.

But some, like retired Marine Cpl. Kyle Carpenter — who received the award in June 2014 — survive and learn from the president that they are being given the highest possible recognition for their courage.

So how does that discussion actually go? Fortunately, that moment when Carpenter was notified by then-President Barack Obama was captured on video in 2014.

“Kyle, this is Barack Obama, how you doing?” Obama said in a phone call to Carpenter at his home in South Carolina. “It's my pleasure to let you know that based on the recommendation of the Secretary of the Navy and the Secretary of Defense, I've conferred the Medal of Honor to you for your courageous actions in Afghanistan in support of Operation Enduring Freedom.”

Carpenter, 27, was awarded the Medal of Honor for diving on an enemy hand grenade that landed between him and a fellow Marine while posted on a rooftop near Marjah, Afghanistan in 2010. The action saved the life of his best friend, but the grenade peppered his body with shrapnel, ruptured his eardrums, and took his right eye.

The president was very appreciative during the phone call, Carpenter told Business Insider in a phone interview. “He told me that one of his greatest pleasures being president was being the Commander-in-Chief,” Carpenter said.

You can watch the video from Defense Imagery below (phone call starts around 5:00):