The Navy’s Most Radical Performance Overhaul Is Coming Soon

Rewards for seniority are out and merit is in, as the Navy aims to overhaul its performance evaluations and fitness … Continued 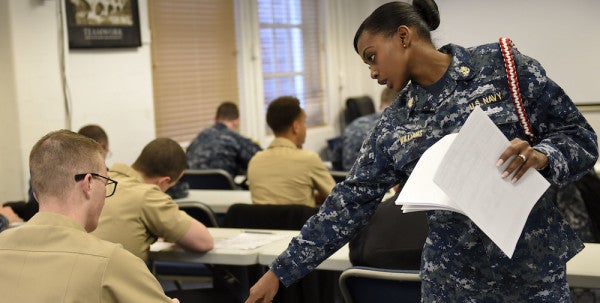 Rewards for seniority are out and merit is in, as the Navy aims to overhaul its performance evaluations and fitness reports.

“We believe that it is time to develop a different system to measure sailors’ performance,” Chief of Naval Personnel Vice Adm. Robert Burke told Navy Times.

He and other senior naval officials plan to replace the current system with one that utilizes technology-driven data, which will allow them to record more specific details on sailor development and adjust opportunities accordingly.

“What we defacto have is a seniority ranking system vice a merit ranking system,” Burke said. “Our surveys and our peer groups universally told us that sailors were dissatisfied with that.”

The new system, Burke said, has been in the works for more than a year, and is based on detailed surveys of enlisted and officers, who responded that the evaluation system is one of their biggest concerns.

“We want to have an objective measure of the sailor’s performance and have meaningful and frequent and useful feedback given back to the sailors,” Burke added.

The changes Burke listed were many, but included ending the practice of “rack and stack,” in which commands divide sailors into paygrade-based peer groups before doling out recommendations for promotions; more consistent, year-round, individualized feedback; and jettisoning the five-point scale now used to gauge sailors’ performance in favor of a much more thorough nine-point version.

“This takes out bias in a lot of ways and that is really what we’re after,” Burke said.

The last time the service updated its evaluation process was in 1996. The new system will roll out to many sailors by next year, with full implementation expected by 2025. Until then, sailors expecting promotions will continue having to deal with the usual evaluation-time bullcrap.