Why NCOs Can And Should Be Innovators

Though “innovation” has been a buzzword for a long time, recently it has become the a real point of emphasis... 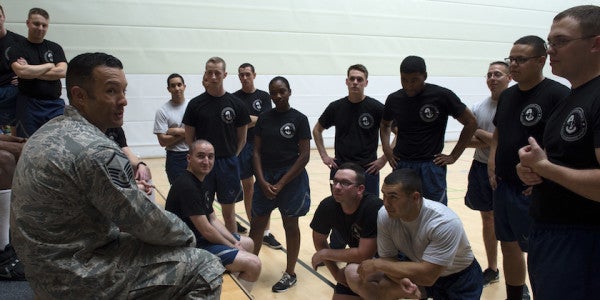 Though “innovation” has been a buzzword for a long time, recently it has become the a real point of emphasis for the Department of Defense. The Defense Innovation Unit Experimental, known as DIUx, started in Silicon Valley and is now open in Boston. Commissioned officers have caught on, and terms like “disruptive thinking” and “innovation” appear more frequently in professional conversations. However, noncommissioned officers remain on the outside, looking in. NCOs can sometimes be reluctant to innovate or champion someone else’s idea, when their evaluation ratings impact promotion. An idea's failure can lead to a poor rating, which may result in separation.

During my time as a drill sergeant, I found rifle marksmanship the most difficult task to train. Trainees become comfortable with noise, smoke, and recoil during the zero process (getting the bullet to hit where they aim). Then they learn to transition between targets. During qualification, trainees engage forty targets from 50-to-300 meters away. It takes from three-to-seven seconds to transition ranges. With only a week to qualify, and limited time at the range, I wondered for a long time how my trainees could build familiarity with transitioning.

Then it hit me: canteens. The one-quart, olive drab green canteen closely matches the silhouette they see on rifle ranges. I used the concrete sidewalk in front of the barracks as a mini-range. In under an hour, the entire platoon could run through transition drills. That cycle, 11 trainees qualified as expert, more than the other three platoons combined. By the end of the day, all my trainees qualified, an unusual occurrence, as a result of this training innovation.

I was not the first, nor will I be the last, innovative noncommissioned officer. After the D-Day invasion, U.S. forces faced difficulty moving through hedgerows separating French farm fields. Sgt. Curtis G. Culin suggested using metal teeth on tank fronts to break through the hedgerow. When leaders worried about finding the metal teeth in the middle of a war zone, troops responded by using German beach obstacles. The U.S. breakout in France sped up.

Enlisted ingenuity is not limited only to equipment. After Vietnam, a group of NCOs met to address the discipline among the force. Every NCO knows the result — the NCO Creed, three paragraphs that guide our actions.

Enlisted personnel have the innovative spirit, but don't really think of themselves as innovators. Innovators reside in Silicon Valley, not in the motor pool, they often think.

But I believe NCOs can be just as innovative as senior leaders, if not moreso. Ask any NCO over a beer what they would do differently, and they have a list of ideas. What they don't have is a network to take their ideas to light.

Enter the Defense Entrepreneurs Forum, of which I am the accountant. Its mission is to inspire, connect, and empower individuals who want to change the DoD from within. An idea's value should not come from the rank of the suggester, but the idea itself.

DEF works from the bottom up, bringing junior leaders together with civilian innovators and entrepreneurs to solve military and national security problems.

Last year, Peter Barkley presented an idea to automate flight scheduling at the annual conference. Through the DEF network, Peter connected with people who assisted his project’s development. From his perspective, “two days at DEF 2015 achieved more for my vision … than the previous two years of work.”

On Oct. 7–9, DEF holds its annual conference at the University of Chicago. If you have an idea, or want to be part of the change, come join other likeminded individuals.