We in the Army love art — at least we love to say “art” when followed immediately with “and science.”... 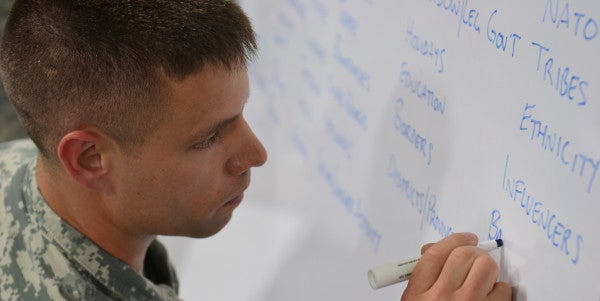 We in the Army love art — at least we love to say “art” when followed immediately with “and science.” The Army enjoys the duality of art and science to an almost mythical level. We apply it to our leadership philosophy of mission command. It has an art of command and science of control. Planning is an art and science. The Army’s Command and General Staff College offers a master’s degree in military art and science. Just add “the art and science of” before any military term, and you may well be profound and doctrinally grounded.

But what do we mean when we call something an art, especially when conducting military operations? For its utility as a conceptual tool for planning everything from the tactical to strategic, is operational art artistic or some kind of practiced professional tradecraft? What makes one war operational art and another operational shlock?

Operational art is a cornerstone doctrinal concept that the Army and joint headquarters use to plan everything from battalion-sized operations up to major campaigns. As such, its definition is so broad that it loses meaning. At the joint level, operational art is “the use of creative thinking by commanders and staffs to design strategies, campaigns, and major operations and organize and employ military forces.” For the Army, operational art is “the pursuit of strategic objectives, in whole or in part, through the arrangement of tactical actions in time, space, and purpose.” It sounds good as a method to order military action to achieve political goals, but operational art is not without its problems.

For instance, Brig. Gen. Justin Kelly and Dr. Michael Brennan argue that operational art supplants the traditional role of civilian leadership: set strategy, design campaigns to realize them, and closely monitor the war’s conduct. “As war continues to diffuse across definitional and conceptual boundaries and as enemies seek ways to exploit democracy’s vulnerabilities, closing the gap between politics and the conduct of war is becoming ever more important.” For them, the Joint definition of operational art should be civilian leaders’ true prerogative. The Army definition is closer to what the military as a whole should do.

Writing for the European Security and Defence Forum, Alexander Mattelaer agrees that operational art doctrine separates the statesman from the general. Concepts such as center of gravity and lines of operation — ideas largely unchanged since Carl von Clausewitz and Antoine-Henri Jomini wrote on them over 150 years ago — limit a planner’s creativity by relying on the collective, unchallenged wisdom of doctrine. The counter is that even if current operational art does not allow for pure creativity and remains tethered to doctrine, that same doctrine has to come from somewhere.

Looking backward, our modern doctrine has a necessary historical foundation that worked back in the day and may have promise for the next conflict. Historian Dr. Robert Citino argues that operational art — dependent on creativity, talented leadership, and the legacy of Prussian Chief of Staff Helmuth von Moltke — has a German origin that allowed for the Wehrmacht's early World War II successes. Historian Dr. Robert Epstein takes an earlier perspective. For him, Napoleon’s cunning use of distributed maneuver of army corps, sequenced tactical engagements, and decentralized command through his marshals allowed him to dominate European armies for several years.

Historian Dr. Michael Matheny makes the case that America’s contribution was not so much an operational art, but a formal operational level to war. U.S. military strengths, formed during the interwar period between world wars, pioneered modern joint operations, global power projection, and logistics that bridged warfighting to war aims. American operational art may very well be a hybrid of these Napoleonic, Prusso-German, and Second World War experiences. And this extensive line up says nothing of the Soviet influences on the subject.

Regardless of the theory’s origin, they all have one thing in common: novelty. For something to be considered operational art, at least by historians, military action must pursue desired strategic conditions or war objectives in a way that no one else does, particularly opposing belligerents. The functional or conceptual imbalances among opponents listed above generated a competitive advantage that lead to initial success in warfare, at least until everyone else caught up. Those unique military practitioners established the state of the military art by forcing an evolution in how it was done into the future. The Seventh Coalition evolved and caught up with Napoleon just as the Allies did against the Axis powers. Striking this novel imbalance and using it to decisive effect may be the art in operational art. This raises a question, however. If that was then, what exactly is the U.S. military doing now?

Current Army doctrine attempts to combine the collective wisdom with the experience and creativity of a commander and staff to solve a military problem in the most logical way possible. Yet when compared against historical precedent, modern doctrine doesn’t stand out as the pursuit of novelty to strike an imbalance. The Army’s definition, to pursue strategic objectives through the arrangement of tactical actions, could be condensed to “get the job done.” One could allow that this is how all militaries would want to win their wars. Nothing is new, so do it if it works. Modern operational art is linear and unexciting, even if sometimes effective at achieve strategic conditions (if they were only realistic and well defined). Most importantly, modern doctrine doesn’t seem to describe operational art as an art at all. It’s operational craftsmanship.

Art historian Laura Morelli makes a solid distinction between art and craft. In the western humanities tradition, an artisan elevated to the role of artist by creating works that were innovative to a point beyond basic utility. Art holds value dependent on individual creativity and merit. Further, the artist is just as renowned as the pieces he or she creates. We don’t speak of just “David,” but Michelangelo’s “David” or van Gogh’s “Starry Night.” These works stand for more than covering bare walls or floor space by generating thought, emotion, and an established new standard of human expression.

Art, whether in the humanities or on the battlefield, innovates to the point where the rules of the game change to accommodate it. The great military paradigm shifts mentioned above changed the way militaries fought and the ways states built those militaries to wage war. For instance, articulated corps, rarely used before, became the norm in western warfare after Napoleon. Further, operational art from the historical examples ties directly to the operational artists who authored them. Just like we say Michelangelo's “David,” we say Napoleon’s victories at Jena and Auerstadt or Moltke’s designs for the 1866 Austro-Prussian War.

An artisan’s crafts, in comparison, adhere to a specified guild- or profession-defined tradition. Others judge and value those crafts by their consistency, quality, and utility. Many may agree that fine furniture fits this bill. An Amish-constructed chair may be beautiful, but in the end it’s just a chair. The president’s famous Resolute desk is just a work station. A crystal chandelier is only a fancy light fixture.

A craft merely scratches the itch of need. Beyond using some technology that’s existed for decades, very little innovation is necessary, for instance, to bomb Islamic State fighters in Syria and Iraq. Unfortunately, we have no household names for Operation Inherent Resolve’s lead planners and executors. Despite these conditions, and the tenuous argument that airpower can win wars, bombing in this situation is generating someeffect even if not lending overwhelming, immediate success. Modern operational art in this case is campaign design by precedent (Vietnam-era Operation Rolling Thunder is uncomfortably familiar in this case) just as the artisan’s craft is a product of the guild and years of tradition.

Operational art, in its modern doctrinal construction, fits the craft description more than art. But in most cases, this may not be a bad thing. In many cases, good old fashioned, blue-collar applications of force may be just what’s needed (or the only thing that can be done given political constraints). Crafting operations and campaigns by using tried and true methods is completely acceptable and understandable, if not shockingly new. It gives some predictability of results, resources necessary to conduct the campaign, and a common framework for the Joint, interagency, and coalition partners. Ultimately, commanders and staffs may not be able or required to use operational art in every sense and in every operation. But let’s call those situations what they are. It’s operational crafting, not art. There is nothing innovative, but gets after the problem as best as possible.

To conclude, any criticism of operational art doctrine would ring hollow without a recommendation. The Army’s new operating concept provides an interesting alternative by describing the imperative of creating multiple dilemmas for opponents. To compel an enemy, the force must put “something of value to them at risk… render enemies incapable of responding effectively.” The nature of operational art and even modern warfare requires a commander to present multiple dilemmas to the opposing force while minimizing one’s own dilemmas. Friendly dilemmas may involve problems of sustainment or coalition, interagency, and host-nation constraints on operations.

Striking this balance in innovative ways is the art in operational art. Its goal is to present a number of equally likely situations to an enemy and compel it to commit wholly to one problem in the face of many or half-heartedly to several and risk failing at all. It allows for a sense of artistry due to an open-ended number of possibilities to seek novelty and advantage. It can incorporate current doctrinal concepts as well. This final definition of operational art would be presenting an enemy with multiple dilemmas while limiting one’s own through a creative campaigning and arrangement of military actions.