Why Is Military Innovation So Hard?

A full replica of a Tyrannosaurus Rex skeleton stands in the entrance of Google Corporation's headquarters in Mountain View, California.... 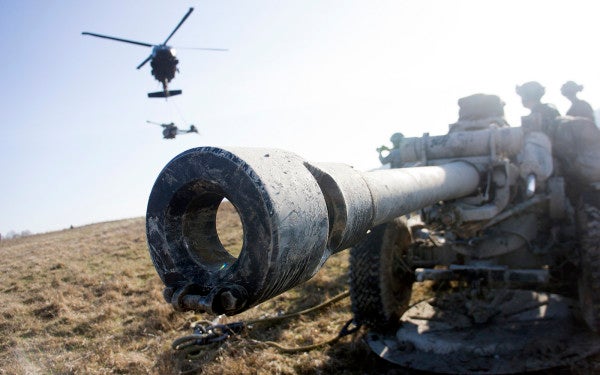 A full replica of a Tyrannosaurus Rex skeleton stands in the entrance of Google Corporation's headquarters in Mountain View, California. Its jaw is open as it leans forward, stretching 36 feet from tail to nose. It looks every bit the hunter that we know from the movies. As intimidating as the T-Rex is, though, the joke’s on him. Google uses the extinct animal as a reminder that we must “innovate or die.”

This story isn’t entirely fair to the T-Rex. While our society praises innovation, reveres entrepreneurs, and studies innovative companies, there are lots of reasons not to be innovative. For starters, innovation can be dangerous.

The danger is not physical, but political. “Political danger” sounds soft, imaginary even, when compared to physical danger. Yet, as far as what drives human behavior and as far as what we feel, political danger is real. The danger stems from competition over status, or how influential we are in an organization. Competition for status creates winners and losers — there are only so many spots at the top. The more hierarchical an organization, the bigger the difference between winners and losers.

Related: How to turn idea generation into a well-honed skill.

Being at the top feels good, as being at the bottom feels bad. The Greek philosopher Aristotle described humans as “political animals,” though more recent scholarship argues that because humans operate in groups, the pursuit of status is a direct proxy for the pursuit of life’s necessities. In the same way that we are “wired” to pursue food and shelter, we are wired to seek status. The “wiring” is emotional. We feel pleasure in gaining status and pain in losing it.

Innovation that challenges a position of status creates the prospect of emotional pain for the person being removed. An individual proposing a disruptive idea can be a threat to someone in a position of status, creating a reaction to attack rather than embrace. The same dynamic impacts military innovations with one added factor: military innovations entail groups more than individuals.

Military innovations — innovations in warfare — usually involve one group within the military becoming more important than another. Groups can represent a weapons system, favored tactic, or a grand strategy.

For example, as the Air Force transitioned to a focus on nuclear weapons at the start of the Cold War, bomber pilots displaced fighter pilots as more central to the Air Force mission. The same has happened in other services, as when aircraft carriers usurped battleships as the Navy’s primary means of projecting force.

In the Army over the past decade, the innovation of counterinsurgency created a debate over strategy — whether force should be employed primarily to destroy enemy forces or stabilize host societies.

Each of the above changes in warfighting meant that one group had to make room for another.

In the same way that we are “wired” to seek status, we are also wired to defend the groups to which we belong. Jonathan Haidt, author of “The Righteous Mind,” has shown that loyalty to a group is one of the foundations of human moral reasoning. The mind is “innately tribal,” designed to “enjoy doing the sorts of things that lead to group cohesion and success in conflicts between groups.”

According to Haidt, “the love of loyal teammates is matched by a corresponding hatred of traitors.” Just as supporting the groups we belong to feelsright, so does opposing groups of outsiders. This feeling can range from trivial and fun, like cheering for a local sports team, to solemn and lethal, as in fighting for your country.

Groups in the military can take many forms: the service you belong to, a specialty within that Service, or the teammates you work with. The feeling of supporting the group can be the difference between saying “yes” or “no” to a new way of fighting. A change that challenges your group would feel inherently wrong, while the opposite would feel inherently right. This is what it means for decisions to be “political” — an innovation is right or wrong based on which group it benefits, not its mission impact.

Group loyalty and desire for status is why military innovation is so hard. More than 500 years ago in “The Prince,” political philosopher Niccolò Machiavelli described the essential challenge of innovation. He wrote,

It should be borne in mind that there is nothing more difficult to manage, or more doubtful of success, or more dangerous to handle than to take the lead in introducing a new order of things. For the innovator has enemies in all those who are doing well under the old order, and he has only lukewarm defenders in all those who would do well under the new order. This lukewarmness arises partly from the incredulity of men who do not truly believe in new things until they have had a solid experience of them. Thus it happens that whenever his enemies have the opportunity to attack the innovator, they do so with the zeal of partisans, and the others only defend him tepidly, so that he, together with them, is put in danger.

Machiavelli’s warning may be dark, but it doesn’t tell the whole story. Machiavelli bases his warning on the “partisan’s” emotional wiring, implying that the wiring is set in stone. He’s only partly right.

Our wiring is natural but not automated. We may have a natural drive for status and group loyalty, but what triggers the drive for status and group loyalty is subject to change. We can make innovation more likely by conferring status based on experimenting with new ideas, and by thinking of our group as everyone on the military team, not just one service or career field. Innovation can come from understanding what drives our behavior.