If you’ve got a thing for the Punisher, the Spartans of old, or the Grim Reaper as part of your... 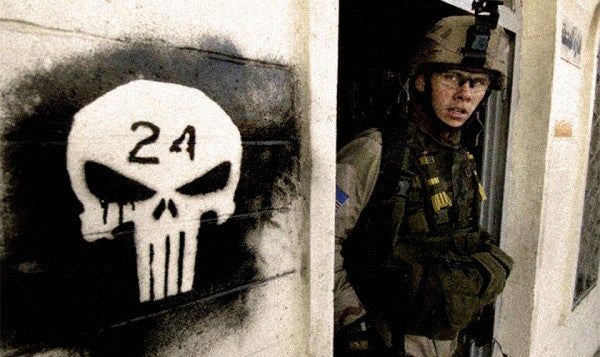 If you’ve got a thing for the Punisher, the Spartans of old, or the Grim Reaper as part of your warfighting gear, the Australian army has a message for you: pack your shit and go.

A new directive from Australia's Chief of Army Lt. Gen. Angus Campbell, circulated internally before spreading to social media on April 17, chastised combat troops for their affection for “‘death’ symbolism/iconography” in informal patches and badges, symbols that include “the pirate Skull and Crossbones (maritime outlaws and murderers), the Phantom or Punisher symbols (vigilantes), Spartans (extreme militarism) or the Grim Reaper (bringer of death).”

“Such symbology is never presented as ill-intentioned and plays to much of modern popular culture,” Campbell wrote in his memo, first posted to Facebook page Pineapple Express on April 17, “but it is always ill-considered and implicitly encourages the inculcation of an arrogant hubris and general disregard for the most serious responsibility of our profession; the legitimate and discriminate taking of life.”

The efficacy of Campbell’s directive is debatable. While some symbols hold a vaguely problematic position in military cultures (see: the tacticool obsession with the strategically-moronic Spartans), others have a more complicated relationship with the combat troops who embrace them. Consider the long relationship between the Punisher and the U.S. military, a symbol that extends far beyond the shallow spray-and-pray of Frank Castle’s post-service vigilantism.

“The Punisher as a character is a bit of a Rorschach test in that as time has passed since his creation, we’ve gone through different cultural eras and through each of those the character has been reinterpreted to reflect the concerns of society,” as Punisher creator Gerry Conway told Task & Purpose in March 2016. “If society feels what we are doing is justifiable, the respect for the military is high, if the society feels guilty or shamed in what we’re doing, we project that onto the military … They are the recipients of our collective Id.”

“Veterans were being abused when they would come home, they weren’t being greeted with ticker tape parades,” Conway added, referring to the treatment of Vietnam veterans upon their return home. “Someone like the Punisher has already been alienated from society and doesn’t feel like he’s part of society, so when society lets him down when his family is killed he doesn’t feel a tremendous obligation to following the rules.”

But even with the deeper symbolism of just “hey I kill things for a living,” these patches are probably not the best idea for operational purposes, if under certain circumstances. Consider the idiot French soldier who caused a major uproar in January 2013 after he was photographed in Mali rocking a skeleton banner torn straight from Call of Duty.

It was a silly little flipout, sure, but French Colonel Thierry Burkhard’s argument that the symbol “not representative of the action that brought France to Mali to help” hints at a potentially reasonable objection to such symbols: if you see a foreign soldier rolling up in your hometown with a skull and crossbones mask, you’re probably not going to think of them as friendly — and that poses problems for cultural engagement on the ground that are essential to building stable security regimes around the world.

What’s your reaction? Do you agree or disagree with the Australian army’s logic here? Sound off in the comments — you know you want to.

australia
australian army
culture
gear
How The Other Half Fights