8 Of The Worst Places To Sleep

No one knows that better than military service members and we have the pictures to prove it. 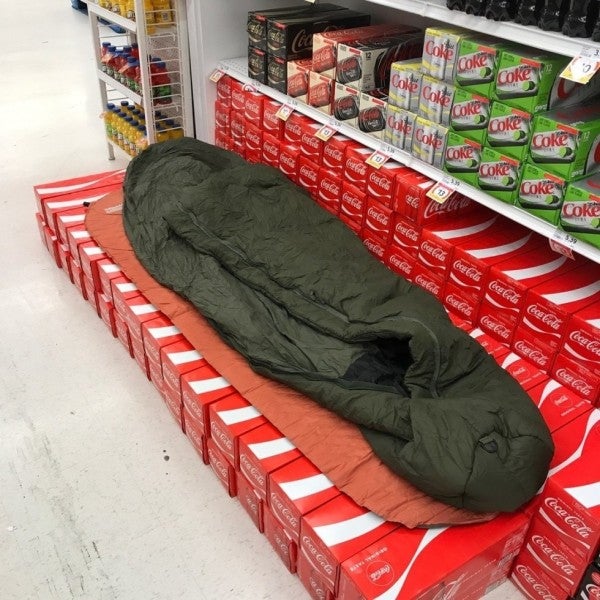 Benjamin Franklin nailed it when he said, “Fatigue is the best pillow.” True story, Benny. There's nothing like pushing your body so far past exhaustion that you'd willingly, even longingly, take a nap on a concrete slab.

Take $75 off a Casper Mattress and $150 off a Wave Mattress with code TASKPURPOSE.

And no one knows that better than military service members and we have the pictures to prove it.

Here are eight of the worst places to sleep.

We've all been there … the point where you're so tired you will literally sleep anywhere. And when you're in those moments, you don't care how many people walked where your face is resting. It's also why it's so important that the times you are able to sleep in a bed, you not only cherish them, you enjoy them.

This is a sponsored post presented by Casper. Task & Purpose readers can get $75 off their Casper line and $150 off their Wave mattresses by using the coupon code TASKPURPOSE at checkout. Fatigue might be the best pillow, but Casper has the best mattresses.

In a tent in the Arctic

If you love that feeling where you can't quite warm up and you're convinced you're going to die overnight from extreme temperatures, even though you're wrapped in foil like a burrito packaged with the expertise of a seasoned Chipotle employee, then we can't recommend the Arctic enough.

Let's be honest here: Even with your long johns and your heat mechanisms and your advanced survival training you're just lying to yourself. You're so damn cold you want to cry but you know your tears will freeze.

In the torpedo room

Sure, on paper, sleeping between strangers on a ship cruising the open seas sounds like a new app we should develop, but sleeping right next to five coworkers and that one mouth-breather isn't probably what you had in mind. And if that wasn't quite enough, add the knowledge that you're in a room with several thousand pounds of bombs.

On a metal folding chair

There's nothing quite like waking yourself with a massive head bob after dozing off while sitting straight up. You know the kind: when the weight of your giant brain falls forward too quickly and bounces at the bottom with enough force you have to wonder if you may have permanently damaged your neck. You play it off with a neck roll and look around to see if anyone noticed.

Spoiler alert: They did.

And, don't worry, you'll do it again in three minutes. Kudos to this dude who probably did that six times before he put his backpack on his lap to prevent it from happening again.

Just looking at where this guy is sleeping makes us uncomfortable (and not only because of the sunburn you know he's going to have on his face). There's something about gravel digging into that inch of exposed skin above your collar and tiny boulders in the small of your back that just screams nope.

Pretty sure that bad boy is for the patient, but sometimes you just have to fold your body completely perpendicular to catch a few zzz's. That's gonna feel realll nice in about 20 minutes. Nothing says “hazmat suit” like throwing your back out.

On the top rack

If you ever rock, paper, scissored over who got the top bunk as a kid, then wow, do we ever have a treat for you. Now available on select C-130s in the New Zealand fleet: the top “rack.” We use that term super loosely because it's more like sleeping on a web of lies that your time as a Marine would be spent doing actual things, not just training exercises.

Soda or pop? We're just calling it ingenious and horrible. Nothing about 39g of sugar in those tiny little cans of brown water is appealing. But if you haven't slept in a grocery store, have you ever even done a relief mission?

On the floor of the Department of Agriculture

Sure, the ground, the racks, the snow, the stretcher – it all sucks, but can you really beat the floor of the Department of Agriculture?

It might be the knowledge that every defeated farmer — who just that morning waded through pig and cow manure — used those same shoes to walk where you're sleeping in order to talk about the Farm Bill that makes this one the worst. Oh you're still okay with it? How about the countless bureaucrats who took the red eye in to make it to their 9:00 briefing and had those same shoes on in the Delta lavatory and then at Dulles? Add in some spilt coffee, regret and broken promises and the only thing you're dreaming about is getting the hell off the floor.