Every year July 4th comes around and, in between barbecues and emergency trips to the ER to get your fingers... 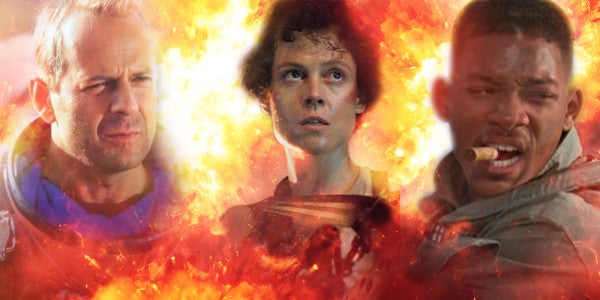 Every year July 4th comes around and, in between barbecues and emergency trips to the ER to get your fingers sewn back on, you must figure out how to fill in the long weekend. Sure, you can watch Forrest Gump for the 20th time, but this a day of celebrating freedom with massive explosions — and what has more explosions than a summer blockbuster from the 90s?

We’ve seen a lot of great films about America kicking ass on the battlefield, but why limit yourself to boring things like “historical realism” when the dumpster behind you local defunct Blockbuster Video is chock full of VHS tapes full of America kicking ass all over the place? It’s time to brush off your old VCR and pop in some American patriotism, summer blockbuster action movie style.

Independence Day: America kicks alien ass all over the place for July 4th

The world is in peril, an alien race has come to earth to strip us of our resources and leave us for dead. A stalwart group of plucky heroes has gathered in the wreckage to use MacBooks and quips to save the world from annihilation. It spawns a sequel that Will Smith passed on to do the Orc Cop movie. Scholars are still debating what was the better choice.

The patriotism: Other than it taking place on the danged Fourth of July? You can’t find a more American set of stereotypes. The stiff-upper-lipped Marine-marrying the stripper with a heart of gold; Jeff Goldblum and his very Jewish New Yorker father bickering in the car while driving beneath a massive alien death ray; a drunk Vietnam fighter pilot who just wants his kids to respect him; and Bill Pullman giving a stirring speech to the ragtag fighter pilots about Independence from annihilation. This movie even tries to pull on every American heart sting at once by destroying three major American cities at the same time, reducing NYC, DC and LA all to smoking rubble.

As someone living in the Midwest, it really gives you something to cheer for.

The money quote: “I picked a hell of a day to quit drinkin'.” — Russell Casse, former Marine F-4 pilot and Vietnam War vet

To hear more in-depth snark about the movie Independence Day, check out our review episode on the What a Hell of a Way to Die podcast

Demolition Man: The three seashells can’t handle what a rat burger does to you

The world is in peril. After accidentally collapsing a building and killing a bunch of hostages, super cop John Spartan is sentenced, along with his rival Wesley Snipes, to be cryogenically frozen for decades, only to be awoken in a world with Taco Bell is fine dining and the radio hits are commercial jingles.

Basically, he woke up in Missouri.

The patriotism: John Spartan is both a man out of time and every 90s action hero in a paradise world we could ever want. He’s rough, gruff, says swears to get toilet paper and refuses to learn about the three seashells and would rather do fluid transfer sex than put on a football brain fuck helmet. He also travels into the sewer systems to find out this idyllic world is anything but, as there are masses of people who survive outside of society, trapping rodents for food and just generally having a blast away from all the stuffy surface dwellers.

Again, might as well have just set this movie a few blocks from where I‘m at.

Armageddon: The better asteroid death movie of the 90s

The world is in peril, an asteroid is about to destroy the earth, and the only thing that can save us all is a ragtag group of oil drillers led by Bruce Willis and Ben Affleck and backed by a soundtrack of nothing but Aerosmith ballads. These salt-of-the-earth drillers must to go through astronaut training to travel to the asteroid, deploy a drill, plant some explosives and crack the asteroid in two so it misses the planet entirely.

You might wonder at any time, why wouldn’t America send actually trained astronauts to do something like this? Let's be honest: Do you think we can trust people who have spent thousands of hours training to fly a space shuttle to operate a drill? No, we need Willis to grimace his way through it while Affleck stares dumbly into the middle distance with his mouth open for some unexplained reason.

The patriotism: There must be a secret formula discovered in the basement of the Pentagon that’s been applied to this movie. Every second is dripping with American clichés. Waving flags, babies being saved, sacrifices of the father, brotherly love that knows no race, and Steven Tyler just off screen in every scene getting ready to belt out another song about love. Even the drillers are created in some kind of laboratory of hackneyed tropes for everyone to see themselves in: the surfer, the muscley dude, the irony intellectual, the rebel and the papa bear. Every VHS copy probably came wrapped in an American flag with a Best Ballads of the 90s mix CD taped to it.

The money quote: “You know we're sitting on four million pounds of fuel, one nuclear weapon and a thing that has 270,000 moving parts built by the lowest bidder. Makes you feel good, doesn't it?” — Rockhound

Terminator 2: Judgement Day: The future of Army AI by teaching it to send texts cursing out your 1st sergeant.

The world is in peril, and the only one who can save it is John Connor. Unfortunately, we don’t get a lot of dirty war hero John Connor, and instead get a whiny kid who in any other movie would have been marched into the sea after their first scene. But he has to save the world from the killer robots we’re creating today, so I suppose we’ll get over it.

This time, the T-800 Terminator from the first movie is back to protect John from the liquid metal T-1000, which leads me to wonder what drawing room floor the T-900 was left on. Interior skeleton but metal melting skin? Or did they try something completely different, like an actual robot?

The patriotism: A kid gets a robot from the future to follow him around for protection and the first thing he does it teach it to swear. This is the logical progression from drawing dicks inside a porta potty. And as philosophers debate the growing use of artificial intelligence in the military, rest assured I and my fellow troops will find some way for it to send spam texts to the newest lieutenant demanding to know where the keys to the drop zone are.

The money quote: “Chill out, dickwad.” — The Terminator

The world is in peril. Arachnids are hurling rocks across the galaxy at the earth and only the cutthroat grunts of the Mobile Infantry can save the universe. These plucky twenty-five-year-old high school students are taken from their comfortable lives and dropped into bug-infested plants to smash and destroy.

The patriotism: This is an awkward one because in a lot of ways you can recognize American exceptionalism and blind patriotism against an enemy you don’t care to understand and instead vow eradication. And then you have that dawning realization that what you’re doing is called fascism and it’s actually…not good.

BUT you can rest assured that the cartoonish overtones of galactic imperialism featuring Doogie Howser dressed in an SS uniform are more than enough to pull you out of the full-blown patriotism into laughter. Every clenched square jaw close-up, every beautiful actress with impeccable makeup in the middle of a pitched battle, and every time a trooper is violently torn in half by some nightmare arachnid — it’s the perfect movie to watch and immediately go into your basement for your own personal bug hunt.

The money quote: “[to Rico] I need a corporal. You're it until you're dead or I find someone better.” — Jean Rasczak

Aliens: The future of the Space Force

The future in peril with the impending threat of face-hugging alien, a Sigourney Weaver is trying to save the planet. Instead of believing her and mounting a full-on attack to destroy the alien threat, Weaver loses her flight status and attached to a single squad of Space Marines gets sent to check it out. You know the squad I’m talking about, the one where you hear you’re working with them and you make a face like you just drank and a bunch of orange juice right after brushing your teeth.

The patriotism: You want a Space Force? Here’s your space force. You can’t find a better cross section of Marines ready to smash and destroy a threat using massive machine guns. You have the joker in Private Hudson, the badass female in Private Vasquez, the father figure who has nothing but tough love for his troops in Sgt. Apone. And even with a massive alien queen ripping people apart, the real enemy is the greedy corporate stooge. You even have a great redemption arc in Hudsonwho goes from joker to coward before finally becoming a sacrificing hero. Watching this kind of bravery always brings a tear to my eye.

Private Hudson: Hey Vasquez, have you ever been mistaken for a man?

Private Vasquez: No. Have you?

You can’t go wrong with some great blockbuster action hero movies, so what are you watching this week?