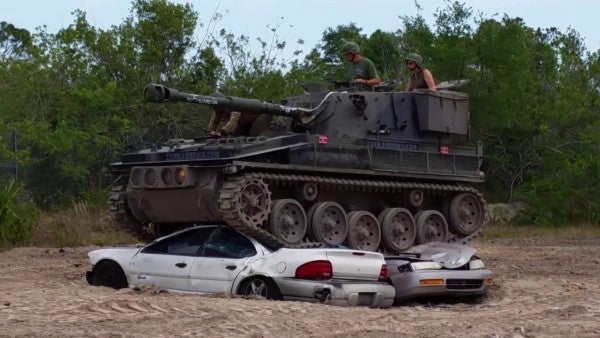 There I found myself, in the jungle, in a situation I never thought I'd find myself in: Surrounded by signs of impending danger, sitting in control of a 17-ton tank and covered from head to toe in brown, gooey mud.

But it was by my own free will that I put myself in this situation at Tank America in Melbourne. Although it's not far from the family-friendly theme parks of Orlando, this experience appeals to a different kind of audience — you can probably leave the kids at home for this one.

“Tank America is the only place outside the Army or Marine Corps that you can come and drive one of these tanks around our three-quarter mile tank trail here,” Kinney said. “You get a chance to run through some mud, go over some obstacles, navigate over a 15-foot hill and have a whole bunch of fun.”

Tank America isn't the only place to have such an experience, but it is one of the few in the United States. You'd have to travel to Georgia, Minnesota or Texas to have an adventure anywhere close to what you get at the 35-acre Melbourne park.

“He said, 'John, did you know that we can buy some tanks?'” Kinney said, recalling a fateful phone conversation with Lotane. “I said, 'Troy, I did not know that. But you've got my attention.'”

Three of the tanks they purchased are a British FV433 Abbot model, which all Tank America participants get to drive for two laps starting with the $349 “basic tank training” package.

For $649, visitors can take an additional lap with one of two APCs (armored personnel carrier) “locked up” with the hatch closed, driving while looking through a periscope.

The $999 “advanced tank” package includes a car crush with the FV433 and a $1,519 “elite package” includes all of the tank driving experiences, car crush and a shooting experience at Machine Gun America.

Those looking to spend a little less while still fulfilling their need for adrenaline can opt for a $25 tactical laser tag session, featuring guns that make a “pop pop” sound and recoil like the real deal.

Most Tank America visitors receive a 45-minute safety briefing before entering the belly of the beast. A Tank America employee named Collin gave me an abbreviated rundown before heading onto the trail.

I was pleasantly surprised to find the Abbot was somewhat intuitive to drive. Basically, you have a large throttle pedal and two sticks that represent the left and right brakes. Those took some muscle to really pull, but otherwise I felt ready for battle. Or for at least my few laps out on the Melbourne site's trail.

During my half-hour trip around the course, I encountered large tires that I ran over with ease, a daunting ascent up Peacock Hill, a four-foot trench and plenty of muddy ruts. The Rolls Royce engine powering my 17-ton beast roared as I conquered obstacle after obstacle.

This is the perfect experience for an army enthusiast or anyone looking for a thrilling encounter that differs from what you find on I-Drive in Orlando — or most other places, for that matter.

And by thrilling, I don't mean that the tank ever travels that fast. No, you can't shoot it. But nothing beats the rush of plunging into a deep mud puddle while in control of the FV433 Abbot tank at full throttle.

After that part, make sure you have a spare change of clothes and a towel. The cockpit of the Abbot is very exposed as you plunge into the mud pit. (To be fair, my instructor Collin did ask me beforehand — “How much do you like that shirt?”)

Although I was filthy for my drive back to Orlando, I couldn't wipe the smile (or the dirt) off my face. My trip to Tank America felt like a unique, once-in-a-lifetime opportunity.