The man behind ‘Lt. Dan’ is all patriotism, no politics

Gary Sinise just published a new memoir called Grateful American, and it's every bit as modest as anyone who has followed his years of support for the veteran community would expect 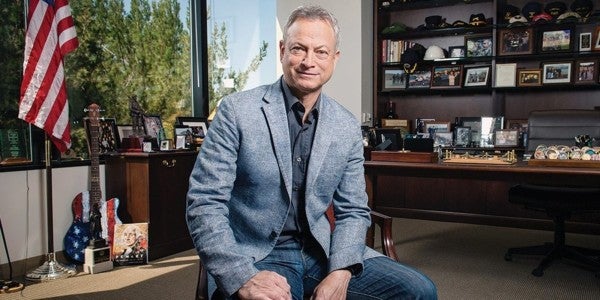 Gary Sinise just published a new memoir called Grateful American, and it's every bit as modest as anyone who has followed his years of support for the veteran community would expect.

Except Gary's greatest talent shines through the humility with which he tells his story. To be sure, he's an extraordinarily gifted actor who has had a storied career both in serious theater and popular movies and television. But his most profound gift is his empathy for men and women who serve their country.

Of course, his particular acting talent isn't unrelated to an ability to see the world through another's eyes. Still, there are plenty of performers who don't share that insight and not many Americans share the sense of mission that Gary's has given him.

Grateful American is co-written with Marcus Brotherton, who also worked with Army veteran Travis Mills on his excellent autobiography As Tough As They Come. Sinise knows Mills well from his work with veterans, and Travis makes an appearance in this book

When Sinise tells his life story, he talks about his own family's service in WWI and WWII and how his wife Moira's brothers both served in Vietnam. When he was artistic director of Chicago's influential Steppenwolf Theatre (a group he co-founded), he directed a powerful 1984 production of John DiFusco's Vietnam War play “Tracers.” That work featured Sinise and fellow future stars Dennis Farina (Det. Fontana on “Law & Order”), Gary Cole (Lumbergh in “Office Space”), Terry Kinney (McManus on “Oz”) and Tom Irwin (Angela's dad on “My So-Called Life”).

Along the way, he talks about growing up with a dad in the movie business: Robert Sinise edited the early, notorious movies directed by splatter-film pioneer Herschell Gordon Lewis. Gary was a terrible student, an avid musician and enthusiastic participant in the counterculture of the early 1970s.

Too young to serve in Vietnam, Sinise knew he wasn't college material and instead followed his instincts and became a driving force behind one of the most influential regional theater groups in American history. There are few actors with Gary's impact who've never received formal training. He credits a high school theater teacher with turning his stoner life around but he's done all the rest on his own.

For the rest of the 1980s and the early years of the 1990s, Sinise continued to add to his creative and artistic credits. He directed and starred alongside fellow Steppenwolf founder John Malkovich in an overwhelmingly successful production of “True West” that played in both Chicago and New York.

Sinise later directed and then re-teamed with Malkovich to star in a 1992 movie version of John Steinbeck's “Of Mice and Men.” It wasn't a big hit at the time, but has come to be seen as a classic, a movie that's shown in high school literature classes all over the country.

Everything changed with “Forrest Gump.” Sinise gives the movie the attention it deserves and there are plenty of making-of stories included for fans of Lt. Dan Taylor.

The cover of 'Grateful American: A Journey from Self to Service'(Nelson Books)

And, yet, it's the story of his nearly forty-year marriage to Moira, her battle with alcoholism and subsequent conversion to Catholicism that's the heart of the story. Gary and Moira's marriage survived the kind of rough times that end most relationships in the real world, and end Hollywood marriages virtually 100 percent of the time.

Another gift Sinise displays is an ability to write about patriotism minus the politics. He writes eloquently about how 9/11 inspired him to take a more active role in supporting the men and women who serve and how the 2003 invasion of Iraq convinced him to sign up for USO tours.

The second half of the book is devoted to tales of his work with the USO and with veterans groups. Fans of Detective Mac Taylor from “CSI:NY” won't be disappointed with the stories he tells about that role, but it's obvious that Sinise's life priorities have shifted to entertaining the troops with the Lt. Dan Band and working with his foundation.

He talks about patriotism and service and never mentions the current president (nor his immediate predecessor). He does namecheck dozens of service members and veterans and the people who run the charities who support them. Sinise is interested in common ground. If that's not what you want from a public figure, you'd best read something besides “Grateful American.”

Gary Sinise has instead written a book that can appeal to anyone who's interested in his theater and movie careers and — at the same time — inspire readers who know him best from his work in support of military members. It's a tough assignment to pull off, but this book delivers with generosity and ease.”

WATCH NEXT: Gary Sinise Gives Back