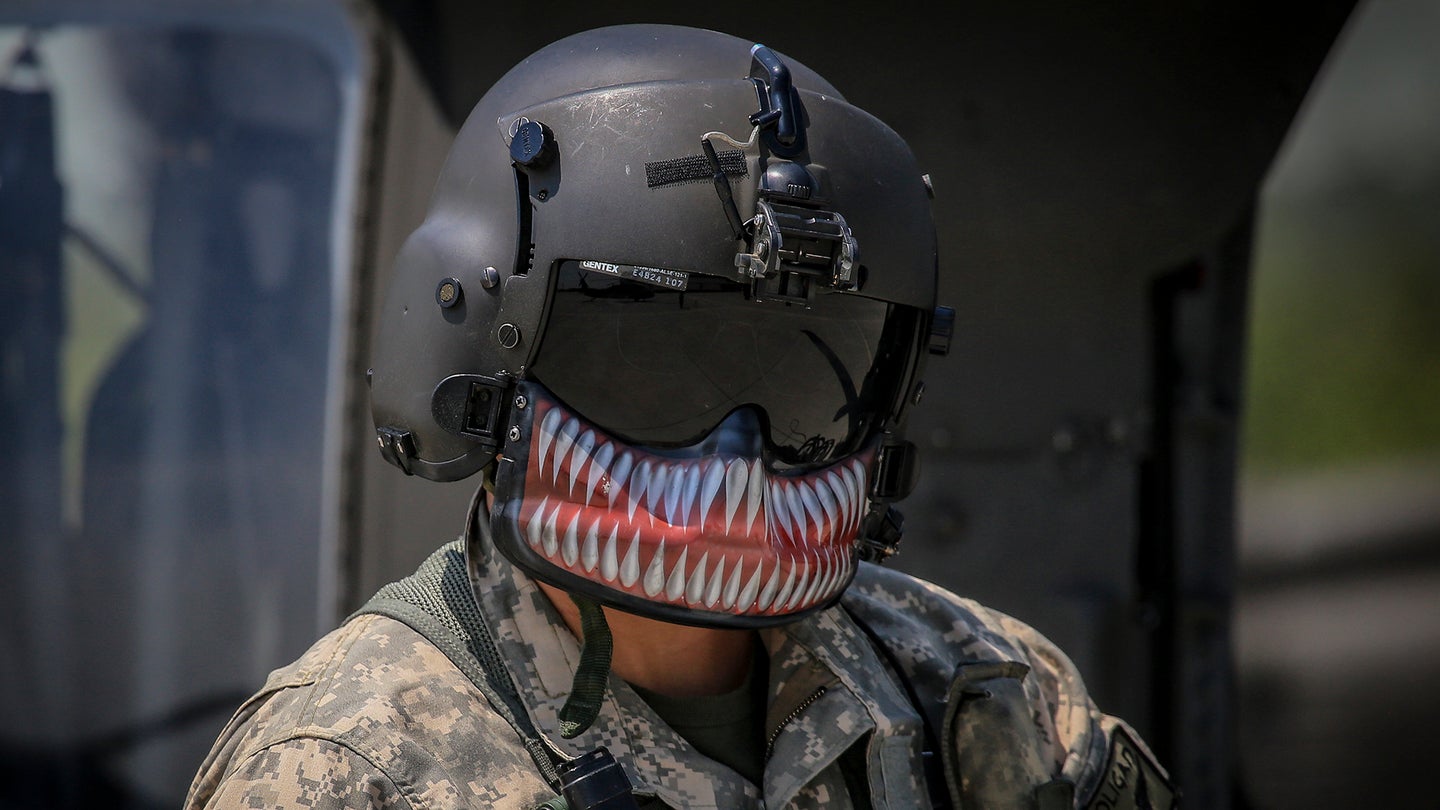 Medical face masks may be in the news a lot these days, but Army aviators have their own face masks for staying safe, warm and, in some cases, super stylish.

This story is chock full of images of UH-60 Black Hawk crew chiefs with sharp teeth, red skulls and maniacal Joker grins painted on their face masks. But why do so many Black Hawk crew chiefs paint up? Joseph Pacifici, an Army veteran with nine years of experience fixing Black Hawks with the 101st and 25th Infantry Divisions, generously took the time to tell Task & Purpose all about it.

Editor’s note: This article was originally published on March 31, 2020.

What crew chiefs do

While Black Hawk pilots fly helicopters, crew chiefs are in charge of keeping the helicopters flying. Pacifici said helicopter maintenance is an all-day job, and sometimes all night too.

“If the helicopter’s broken, we’re going to stay until it’s fixed,” Pacifici explained. “If it can’t be fixed that day, we’ll plan it out. But if it’s one of the tasks that can get pushed through in three hours, I’ll sit there with my buddies in the middle of a night with a headlamp and knock it out.”

Most military aircraft have crew chiefs who are responsible for maintenance, but Black Hawks and Chinooks are unique in the Army in that the crew chiefs for those helicopters actually get to fly on missions too, Pacifici explained.

Once they are airborne, the crew chief is in charge of keeping the aircraft happy, firing the door weapons, helping the pilots land the helicopter and managing any cargo or passengers a helo might be hauling.

“Crew chiefs are responsible for everything back of the pilots’ seats,” said Sgt. Marcus Wilson, a crew chief with the Idaho Army National Guard, in a 2018 article for Citizen-Soldier.

It’s a lot of responsibility, and while all crew chiefs start out in the helicopter maintenance platoons, only the best get to put on the face mask and flight helmet, Pacifici explained.

“It depends on you as a person and how much you want to read,” said Pacifici, who was only in the maintenance platoon for three months before becoming a crew chief. “If you don’t mind sitting there at night reading a technical manual learning everything there is to know about the helicopter, you’ll get to the flight company. If you don’t, it’ll show and people will notice.”

Pacifici was one of those who didn’t mind reading. In fact, working with helicopters was all he wanted to do in life after visiting a Sikorsky helicopter plant on a field trip when he was five years old.

Once he got to the Army, Pacifici wasn’t disappointed.

“When I went to work it was sweating, bleeding, thinking, fixing things, listening to the helicopter,” he said. “At the end of the day, my body’s tired and my brain’s tired, but it was satisfying work.”

A pain in the neck

Being a crew chief is literally a pain in the neck sometimes; Pacifici said the helmet plus night vision goggles and other equipment puts an additional 14 to 17 pounds on a crew chief’s neck for six to eight hours a night.

“At the end of every night I’m sitting there holding my helmet with my hands,” he said. “It doesn’t matter how strong you are, your neck can’t support that weight for that long.”

At six feet, three inches tall, Pacifici also had plenty of back pain from the low-ceilinged troop and cargo compartment. Still, the reward of solving a problem on the helicopter made all the pain worthwhile.

“It’s like a contest,” Pacifici said. “You have six of us sitting there, thinking about this problem. You let the newer guys try to run through it first and talk through the systems. Then you start correcting them as they go and at the end of day, if it’s a really hard problem, you’ve got two maintainers drawing it on a whiteboard and figuring it out.”

Constant work around helicopters builds a sense of pride and camaraderie among crew chiefs that has its own unique traditions, like treating the helicopters as if they’re people.

“We’d give our helicopters chick nicknames, like ‘I’m going to go sit with Sarah for a little bit,’” Pacifici said.

The other tradition, the one that inspired this story, is the face mask. The face mask protects the crew chief’s face from dust and cold weather, Pacifici explained, and not all crew chiefs paint them.

“Some guys just take it off at the end of the day and it’s just part of the uniform,” he said.

But for others, it’s something else: the masks are a kind of attitude, Pacifici explained.

Like becoming a crew chief, the face masks are also a mark of how dedicated a soldier is to the helicopter, Pacifici explained.

However, wearing the warpaint didn’t come without risk. Painting an Army-issued face mask technically counts as destruction of government property, and if the wrong person is in the hangar at the wrong time, it could mean push-ups or a chewing-out for whoever’s wearing it.

Pacifici bought his own mask to paint in order to avoid the destruction-of-government-property charge, but he still got yelled at a few times for wearing it. He would take the mask off for a while to set an example for the younger guys, he said, but he’d always put it back on eventually.

Though Army higher-ups often don’t appreciate the face masks, Pacifici said, plenty of other people do.

In Afghanistan, the crew chief recalled doing hearts-and-minds missions in small villages where the local kids would “look at the guys with the face masks and be like ‘whoaa’,” he said. Pacifici remembered getting the same reaction out of Indonesian soldiers during missions there too.

“When we go to different countries, we don’t look like robots anymore,” he said. “They think it’s cool seeing crew chiefs with different masks.”

To be fair, Pacifici said many of his superiors in the Army didn’t mind the face masks as long as he and his colleagues kept the Black Hawks flying. But in the couple years before he left the Army in 2017, Pacifici noticed the branch was becoming much more strict about the rules regarding maintainer gear.

“Now they’re getting crazy with knowing all the regs and following them to a T,” he said. “They’re cracking down on that nowadays.”

Pacifici recalled seeing far fewer face masks in the crew chief ranks when he left the Army compared to when he got in. But there’s one mask that isn’t going anywhere, and that’s his own.

After Pacifici left the Army, he kept his painted face mask with him, bought his Army-issued one, and even shelled out $980 to buy his helmet, too. It had been with him for nine years, after all.

“Helicopters save lives, they pick up the injured,” he said. “I’ve carried more injured foreign nationals than my own soldiers sometimes. Helping them out … there’s not a feeling like it.”