Remembering the fallen veterans of the 1918 pandemic

"We are all a part of everything that's happening, all at the mercy of history and where it picks us up in its currents." 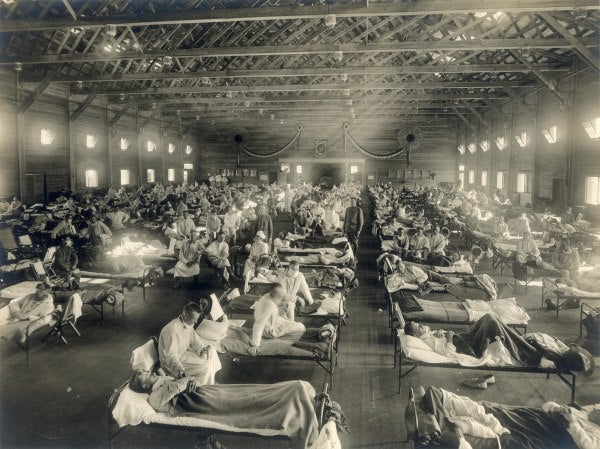 In the fall of 1918, during World War I, a Spring Valley lemon ranch manager named Edwin “Ned” Alderson joined the Army.

Picked to be an officer in charge of a machine-gun unit, he was due to board a train out of San Diego with other troops on Nov. 11, which turned out to be the day Germany surrendered. The fighting ended.

Alderson probably felt lucky. But not for long.

During his time at Camp Kearny, the Army base located where Marine Corps Air Station Miramar is now, he had contracted the Spanish flu. He died on Dec. 13, at age 24, and became one of an estimated 50 million victims of a pandemic that swept the globe and infected almost one-third of the world's population.

The death toll in San Diego was 366, and most of them were in the military — a somber reminder, on this Memorial Day weekend amid another pandemic, that combat isn't the only way people in uniform are killed.

Dozens more with ties to San Diego died from the flu elsewhere. One was a Navy surgeon working in Boston. Another was a nurse who volunteered to treat stricken sailors and soldiers in Los Angeles and came down with the virus herself.

Their graves dot cemeteries throughout the county, and on the headstones it's striking how few years separate the dates of birth from the dates of death. Unlike the current coronavirus pandemic, which is most lethal to older generations, the 1918 flu hit people between the ages of 20 and 40 the hardest.

That gives their passing an added poignancy that ripples through families more than a century later.

“He had so much potential,” said Gunhild Kristin Jordan, a Seattle-area resident who is Alderson's great-great niece. “It was supposed to be his time, and it just wasn't.”

Alderson wanted to be a lawyer. He'd gone to Dartmouth College, then Stanford University, graduating with a pre-law degree in 1915, a year after the war started in Europe.

By the time the United States starting sending troops overseas in 1917, he was helping to run a lemon ranch, a trade he'd grown up with because of his parents.

His mother came from blue-blood New England stock, his father from Yorkshire immigrants. They'd met in the Midwest and fancied themselves pioneers, working the land in Oklahoma, where a daughter, Elizabeth, was born, and in Nebraska, where Ned was born two years later.

There were other moves, to Colorado and British Columbia, before the family settled in Spring Valley.

Elizabeth, known to Jordan as Grandmother Betty, lived to be almost 103. She talked off and on over the decades about the brother she'd lost to the flu, her only sibling. It weighed on her in ways she couldn't always articulate.

“All that missed life,” Jordan said.

San Diego was home to about 75,000 people when the flu was first reported here in late September of 1918. It hit sailors stationed at a Navy training camp in Balboa Park and the soldiers at Camp Kearny, which the Army had built a year earlier to ready troops for the war.

Those infected were put in isolation wards while doctors publicly dismissed the flu as “the common garden variety.” But something different clearly was up. Six months earlier, the first outbreak in the U.S. had been reported at Fort Riley, an Army base in Kansas, and by the time it reached San Diego, it had infected 20,000 soldiers at two-dozen camps around the country.

At Kearny, doctors put the entire camp under a general quarantine in early October. They set up a detention ward, where new arrivals were held for five days and monitored for signs of illness. They temporarily closed amusement halls and exchanges and put cloth screens up between cots in the sleeping tents. They boiled the sheets and blankets.

But the number of cases kept rising, and soon the civilian population was affected, too. Officials in San Diego and neighboring cities issued orders closing schools, theaters, museums, churches, libraries and other places where the public gathered. They asked people to wear masks while outdoors.

By the end of the month, according to a story in the San Diego Union, the county had recorded 535 flu cases and 20 deaths.

In mid-November, as the infections seemed to be slowing, many of the restrictions were lifted, only to be followed by another flare-up. Over a two-day period, 100 new cases and eight deaths were reported.

When local officials dragged their feet about imposing a new round of restrictions, the state health department stepped in and ordered gathering places shuttered in early December. Masks became mandatory. Again the infections slowed, and by the end of the year they were mostly gone from San Diego.

In 1919, the Army's surgeon general issued a report showing just how devastating the flu had been to its troops the year before. It tallied almost 690,000 hospital admissions attributable to influenza and its complications (primarily pneumonia), and almost 40,000 deaths.

Of those killed, 161 were at Camp Kearny. Based on various records, at least 60 people stationed in the Navy here also died.

On Oct. 20, 1918, the Union ran a short story about “the impressive funeral services” for Helen McGuire, a Red Cross nurse who volunteered to treat flu-stricken soldiers and sailors in Los Angeles before contracting the disease herself.

A quarantine at the Navy training camp in Balboa Park prevented sailors and officers from joining the funeral for a full military burial, but a small unit of rifleman fired a salute as the coffin was lowered into the ground.

A bugler sounded taps. A soloist sang “Face to Face (With Christ My Savior),” which was McGuire's favorite hymn.

In the newspaper, a photo of the nurse was published with this caption:

“Miss Helen McGuire, a San Diego nurse, who volunteered her services to the Red Cross and gave her life that others might live. Her name will be indelibly written in the hearts of those who mourn her.”

Betty Alderson Rehm understood the feeling. She never got over losing her brother, Ned — the Spring Valley lemon rancher who wanted to be a lawyer.

“She often spoke about her only sibling dying of the flu while in the military,” said Jordan, her great-granddaughter. “She missed him all those decades of her life.”

Her sorrow echoed through the family. One relative, born on the calendar day Ned Alderson died, Dec. 13, grew up thinking his birthday was actually a day later because that's when it was celebrated. He was told the change was made for superstitious reasons — unlucky 13 — but Jordan thinks it may have had something to do with unhappy memories, too.

She's recently been researching her family's history, and it turns out that her husband, Larry, has a military connection to the 1918 pandemic, too. His great-grandfather was a soldier in the German army during World War I. Captured, he was sent to a POW camp in Scotland, where he caught the flu and died the day after the armistice was signed.

He left behind three young boys. Two of them perished in a later horror, the Holocaust. The other one escaped Germany just in time, came to New York and started a branch of the family tree that includes the man Jordan married.

“We are all a part of everything that's happening,” she said, “all at the mercy of history and where it picks us up in its currents.”

Related: 7 visceral WWI movies and shows to watch after you experience '1917'