‘A Dying Breed’: Michigan Battle Of The Bulge Veteran Remembered As Numbers Dwindle

Jennifer Pasch went through much of her life knowing nothing about her beloved grandfather’s role in one of World War... 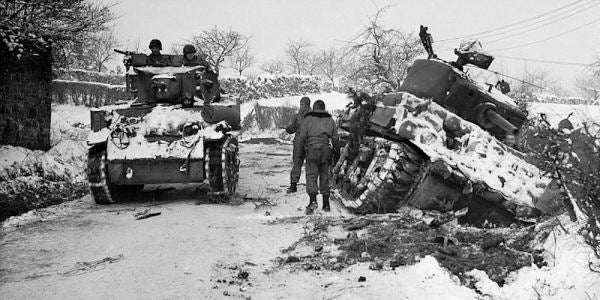 Jennifer Pasch went through much of her life knowing nothing about her beloved grandfather’s role in one of World War II’s deadliest battles and the memories sitting concealed within him.

Pasch, now 44, knew of the passion her grandfather Charles Lewis, of Traverse City, had when it came to serving fellow veterans, but he rarely spoke about his own experiences. The Battle of the Bulge veteran kept his stories to himself until about 15 years ago, after his great-grandchildren began learning about it in school.

“Before that, he would never say a word about it,” she said. “I think they were told to come back and move on. They didn’t dwell on it.”

Some of those stories linger in the minds of her family. They hope to spread awareness of the bloody battle and its significance to America’s history, especially as the number of surviving Battle of the Bulge veterans continues to dwindle. That number shrunk to two locally when Lewis died on the morning of Aug. 28.

Lewis, an Army veteran, was a staple at funeral services for local veterans as a member of the Traverse City VFW Post’s Honor Guard funeral team. Pasch said he was a kind-hearted man with a passion for helping his “war buddies” and doing what he could do volunteer or plan funerals. Even when he could no longer drive Lewis made sure he found a ride to do his part at the services, Pasch said.

“He always cared about the veterans,” said Bobbie Lewis, Charles’ daughter-in-law. “He was a very kind, gentle person.”

Charles Lewis was born in Allegan and joined the Army on Jan. 24, 1941. He completed machine gun, small arms and parachute training before entering combat with the 75th Infantry Division, according to his obituary.

In a December 2016 interview with a Record-Eagle reporter he talked about his wartime experiences after he deployed to Europe following the attack on Pearl Harbor. His service earned a collection of honors including two Bronze Battle Stars.

Bobbie Lewis said her father-in-law was very proud of his service.

The memories surviving veterans have of the month-long battle that sparked in mid-December and killed about 19,000 Americans can be difficult to ponder for some.

Maury Cole, 92, of Fife Lake, is one of the two remaining veterans from the region who survived the battle. He remembers hunkering down for much of the battle in foxholes likely dug by German troops, dodging gunfire and freezing rain while sheltering themselves from the temperatures that sunk well below zero.

“(The fox holes) were our home,” he said. “We didn’t do anything but carry guns and shoot and fight and do whatever we had to do.”

Bobbie Lewis said it’s concerning to see the number shrink, especially with so many in the younger generations unaware of the battle's toll.

“He’s kind of a dying breed,” Bobbie said about her father-in-law. “Who’s going to tell all these stories to our children? They’re not going to really know what went on in war and what our poor veterans went through.”

Charles’ son, Todd, recalled his father telling him about dealing with the bitter cold conditions during the battle and the lack of winter clothing available at the time. His father and other American soldiers had to take coats and warm clothing off of dead Germans and do what they could to keep warm.

He also remembered his father’s stories of compassion during the war, like taking a young German as a prisoner of war, rather than killing him when he ran out of ammunition.

“Dad always said to me he didn’t have the heart to kill a man,” Todd said.

He spared the lives of two more Germans, capturing them instead at a different point in the war, his obituary indicates.

Lewis was very proud of his military service until the moment he died, even if he didn’t speak about it for much of his life, Pasch said. She hopes his experience and the experience of the thousands of men who died on that European battlefield fighting for America’s freedom do not go unnoticed into the future.