Editor’s Note: The following story highlights a veteran at Nationwide. Committed to including talented members of the military community in... 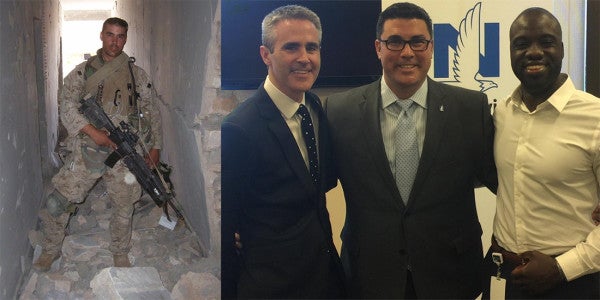 Editor’s Note: The following story highlights a veteran at Nationwide. Committed to including talented members of the military community in its workplace, Nationwide is a client of Hirepurpose, a Task & Purpose sister company. Learn more here.

It’s difficult to hear “Nationwide” without finishing the iconic jingle… “is on your side.” The company has backed up its slogan by earning top honors in the insurance industry, including recognition from Fortune magazine as one of the “100 Best Companies to Work For.”

Senior consultant and staff administrator for Nationwide’s Investment Management Group Jason Dominguez embodies the commitment to service and strong values the company is known for. But before beginning his career at Nationwide, a family legacy inspired Dominguez to join the military.

“My grandfather was in the Marines during the Korean War. I felt the need to serve others and defend our way of life,” he reveals. “For me, the Marine Corps was the ultimate experience to do that.”

As a sergeant in the Marine Corps Reserve, Dominguez deployed to Iraq shortly after his college graduation. During this time, he had the opportunity to develop new skills and gain experience as an infantry squad leader.

Back on American soil, Dominguez worked in political campaigns on Capitol Hill, managing political campaigns and leading a state agency for veteran services over the course of 10 years. Now, he continues serving his community in his role at Nationwide.

“That culture of service follows you where you go in life,” he explains. “At Nationwide, I now have the opportunity to help veterans find their place in the world after service.”

Dominguez is no stranger to the struggles that come along with transitioning into a new career field after committing so much time to one industry.

“Getting out of politics is almost as difficult as getting out of the military,” He says. “It took me about two years to do that. It required finding a different way to communicate my values.”

Looking back on his struggles during this time, one of the biggest mistakes he believes he made was assuming his military skills and experience speak for themselves.

“People aren’t going to be able to necessarily look at your resume and see where you fit in the organization,” Dominguez explains. “You have to paint that picture for them and show them the value you bring to the company. What are you passionate about? What are you good at? How do you add value with your skills and expertise? I started to communicate this way, and it was a game changer for me.”

Outstanding values and a family-friendly culture were what first drew Dominguez to Nationwide.

“Nationwide helps its members protect what matters most,” he shares. “They exist to help people have peace of mind. To me, that’s a noble purpose that really aligned with my values.”

In order to land his job at Nationwide, Dominguez highlighted the skills he gained from his years of military service, including his abilities to deal with ambiguity.

He goes on to say, “You’re going to have multiple projects, and you’re going to have to prioritize. The military really taught me how to adapt and overcome. It really goes into being resilient. Experience a setback and get up and go back at it. That is something that really contributes to my success here.”

“One of the best things you can give a veteran is an opportunity,” Dominguez says. “At Nationwide, I think we do a good job of giving them that opportunity and surrounding them with the community they need. I’m glad to be a part of that as we continue our path to hire 2,000 veterans.”

To attract veteran talent, Nationwide is committed to meeting service members face-to-face in their communities. Nationwide recruiters attend hiring events and perform resume reviews with veterans to prepare them for the civilian workforce.

The associate resource group invites guests to its meetings who touch on topics important to the veteran community. To ensure that everyone in our locations across the country has the opportunity to engage with senior leadership, the group hosts virtual meetings via Skype where members can ask questions and hear directly from senior executives.

Providing opportunities for continued learning and career development is an important part of Nationwide’s culture for all associates — including veterans.

“We have a culture of development,” Dominguez says. “Nationwide encourages you to make a development plan every year. This could include continuing education or leadership skills. You define what those are, and work on that with your leader.”

Nationwide also honors veterans during special events throughout the year, including Memorial Day ceremonies and Veterans Day breakfasts. Additionally, they go above and beyond by sponsoring Honor Flights to send America’s heroes of wars past to Washington to visit their memorials. Representatives from the company also serve as guardians on these trips.

For Dominguez, one of the most touching events was memorializing the life of fallen Capt. Nick Rozanski by adorning the Nationwide car with his name at the NASCAR Coca Cola 600 in Charlotte for 600 Miles of Remembrance.

“His wife was working at Nationwide at the time Nick was killed in action,” Dominguez says. Nationwide flew her and their two daughters down there to be at the NASCAR race. It was an incredible event and an opportunity to show our commitment to the veteran community.”

This commitment is apparent in all that Nationwide does to serve and support the veteran population.