Photographer Inbal Abergil remembers her confusion the first time a friend invited her to the beach for Memorial Day, shortly... 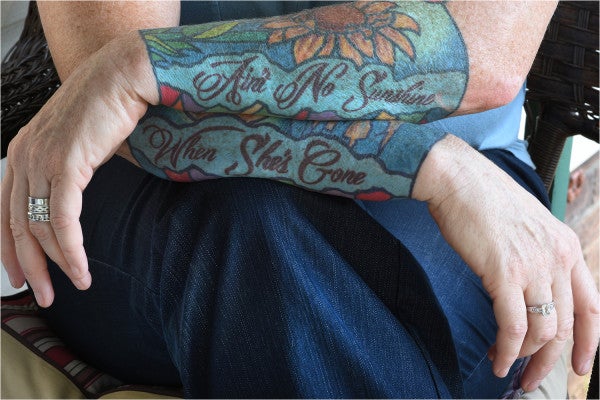 Photographer Inbal Abergil remembers her confusion the first time a friend invited her to the beach for Memorial Day, shortly after she immigrated to the U.S. in 2009. “I said, ‘But we’ll be going to ceremonies right? To pay our respects?’”

Abergil, 40, grew up in Jerusalem, and like the majority of Israeli citizens, she served in the Israel Defense Forces, working as a photographer for the air force. Back home, she says, Memorial Day is a solemn event. The 24-hour observance, which typically falls in early spring, begins with an air-raid siren — and the immediate suspension of all regular activity. People stop whatever they’re doing, conversations cease, drivers pull off the highway and leave their cars, standing at silent attention for a full minute. Entertainment venues are shuttered by law for the day. Radio stations throw out their usual playlists in favor of hymns and patriotic music. TV networks air special programming, including a 24-hour crawl of the name of every member of the armed forces killed in service to the nation and in the decades of intermittent strife that preceded its founding (23,544 at last count, plus some 3,112 residents killed in terror incidents). Ceremonies are held throughout the country, and prescribed bits of scripture are recited, including Psalm 144: “Blessed be the Lord, my rock, who traineth my hands for war and my fingers for battle.”

In time, Abergil began to appreciate the difference between the two forms of observance — one by a small, tight-knit population that experiences war up close and has enforced conscription for more than six decades, and another by a nation that fights its wars in distant lands, relying on a volunteer force (less than .5% of the population) to do the dirty work.

The disparity, and her urge to understand it, inspired Abergil’s new book, N.O.K.: Next of Kin (Daylight Books), which focuses on the more private and personal forms of memorialization practiced by American Gold Star families, even as the country as a whole celebrates the advent of summer with cookouts and super sales. In a series of understated if devastating photographs and interviews, she examines the mementos, shrines, and other private forms of remembrance through which family members have quietly sought to honor their fallen kin: be it a government-issued pillow with a T-shirt pillow case, a camel plush toy, or a pair of elaborate sleeve tattoos.

Her eventual goal, she says, is to place the images in a museum collection, “something permanent, that will remain long after I am gone and the family members are gone, so the names of the loved ones won’t be forgotten.”

Here’s a sample of her work:

“The two shirts and the pillow came back, so I kept this. And that's how I sleep with them I pretend that it's him. It's not him but I pretend.” — Emily Toro, mother

“Joshua’s drawing. With memories, it never gets better, it gets different. It’s never less clear it’s just as clear today as it was the day it happened.” — Kris Hager, father

“My dad says he doesn’t like going to that area in the living room … so he just comes through it.” — Edna Ortega, sister

“This was a Christmas gift from Iraq. My daughter has this stuffed animal like this. She doesn’t go anywhere without it… She calls him Camel. She said, “Mommy, that’s all I have left of Daddy.” Right now, it needs to be stitched up and she needs it to get stitched, but she doesn’t want anybody touching it.” — Linda Lake, wife

“That's his uniform. I just didn't want to put it away and hang it in a closet. I wanted just to keep it out.” — Pam Birdwell, mother

“It was 2010; I proposed, but under “Don’t Ask, Don’t Tell,” if you’re caught in a marriage, pretty much, you are automatically kicked out of the army. Neither one of us wanted to lose our careers or what we do—I mean, you serve because it’s part of your heart, you serve because it’s who you are and you want to do something for your community or for your brothers and sisters, so we didn’t want to lose that.” — Tracy Dice, wife

N.O.K.: Next of Kin is available November 14, via Amazon and other booksellers. On Thursday, November 9 at 7 p.m., Inbal Abergil will sign copies and participate in a discussion at the Bronx Documentary Center (free with RSVP).