For more than a hundred years, one weapon has traveled with American troops into almost every crisis, hot spot, and war the United States has participated in 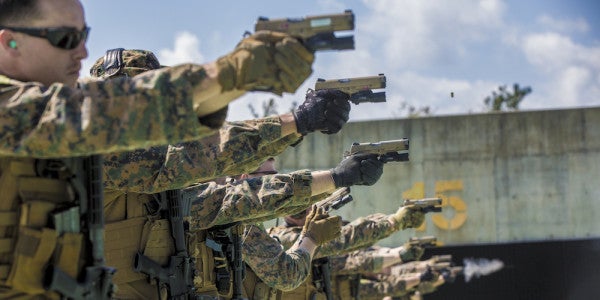 For more than a hundred years, one weapon has traveled with American troops into almost every crisis, hot spot, and war the United States has participated in. Developed as a response to Washington’s first overseas insurgency, the 1911 pistol still accompanies U.S. forces today around the world.

The 1911 semiautomatic pistol was invented by John Moses Browning, one of the most successful—and some would say, legendary—inventors of firearms who ever lived. Between 1879 and 1926 the prolific Browning invented some of the most successful firearms ever made, including the 1911 pistol, the Browning Hi-Power pistol, the Browning Automatic Rifle and the M2 Browning heavy machine gun. Invented in 1921, the M2 still serves as the standard heavy machine gun of the U.S. armed forces.

The 1911 was designed with a new handgun cartridge, .45 ACP, in mind. The .45 Automatic Colt Pistol round, also designed by John Browning, was developed in response to the ineffectiveness of the U.S. Army’s then sidearm, the Colt M1892 revolver. U.S. troops sent to the Philippines during the Philippine-American War (1899–1902) discovered the revolver’s .38 Long Colt cartridge lacked the ability to reliably incapacitate Moro warriors in combat. The Muslim warriors tied off their limbs to prevent blood loss. They were still able to get within striking distance of U.S. soldiers with melee weapons, even after being shot.

After the war, the Army decided it needed a heavier round with greater killing power. The .45 ACP and 1911 pistol were developed with America’s experience in the Philippines in mind. The U.S. Army formally adopted the 1911 just in time for World War I. The 1911 proved a powerful and effective handgun in the hands of the American Expeditionary Forces. Army Sergeant Alvin C. York used his 1911 pistol to single-handedly kill six German soldiers charging him with fixed bayonets. He earned the Congressional Medal of Honor as a result.

After the war, the 1911 experienced a series of modifications designed to make the pistol easier to shoot. The new pistol was designated 1911A1 and changes included scalloping of the trigger housing, a longer safety spur and wider sights. The interwar period also saw the handgun popular with celebrity gangsters of the time—notorious bank robber John Dillinger carried a 1911A1 modified into a machine pistol by a San Antonio-based gunsmith. Outfitted with a barrel compensator and a grooved foregrip, the so-called Lebman Machine Pistol could shoot a thousand rounds a minute.

During World War II, the United States transformed itself into the “arsenal of democracy,” converting hundreds of civilian factories into war-production facilities. Contracts for production of 1911A1 pistols were doled out to civilian gun companies, including Colt, Remington Rand, and the Ithaca Gun Company, as well as civilian companies like Union Switch and Signal, and even the Singer company, famous for sewing machines. The five hundred sample 1911A1s built by Singer were famously well made, but ultimately the company decided it was better suited to making artillery fire-control directors. Overall, more than 1.9 million 1911A1s were produced during World War II.

The guns were not just supplied to the U.S. military, but also to allied forces and guerillas. The 1911A1 served with Brazilian, Canadian, Chinese Nationalist, British Commonwealth, Mexican and Soviet forces. Many of the guns were provided under the Lend-Lease program, which shipped vast amounts of food, fuel and war materials abroad. Many 1911A1s were also provided to anti-Axis guerrilla forces worldwide. The 1911A1 persisted in American service for another forty years, serving through the Korean War, interventions in Lebanon and the Dominican Republic, and the Vietnam War. The gun was finally replaced in 1985 with the Beretta 92 pistol, which entered service as the M9.

The 1911A1’s record is mixed. The handgun certainly is powerful, and its 7+1 ammunition capacity allows for more firepower than a revolver. Its reputation as a bucking “hand cannon” is often overstated as the 1911A1’s heavy steel frame tends to soak up much recoil. Recoil is more like a firm push, in contrast to the whip of lighter polymer frame handguns firing smaller caliber ammunition.

Still, the 1911A1’s basic design is more than a hundred years old. The new generation of polymer guns such as the Glock are also much easier to disassemble and incorporate new features such as striker-fired operating systems, trigger safeties, loaded chamber indicators and larger magazines capacities.

Although the 1911A1 has been phased out of regular U.S. military service, pockets of 1911s still persist. In 2014, the Marine Corps placed an order for twelve thousand Close Quarter Battle Pistols (M45A1). The M45A1 is a 1911A1 built by Colt Defense with modifications, including a Picatinny accessory rail, night sights, and a desert-tan paint job. The pistols were distributed both to U.S. Marine Corps Forces Special Operations Command (MARSOC) and special-operations-capable Marine Expeditionary Units.

In 2014, the U.S. Army announced that it would hold a competition to replace the M9 pistol, and there was hope that the M1911A1 might make a return. Unfortunately, one requirement of what would later be called the Modular Handgun System was low recoil, which implicitly disqualified the venerable pistol. The Army would later go on to select the Sig Sauer P320 for its twenty-first-century handgun. As for the 1911A1, it still lives on in the hands of Marines—and private gun owners worldwide.