The U.S. Air Force trained and certified 13 pilots with virtual reality headsets in less than half the normal training … Continued 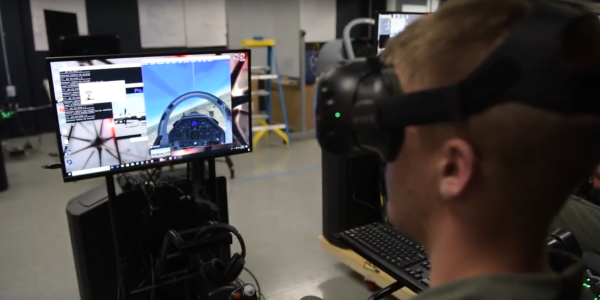 The U.S. Air Force trained and certified 13 pilots with virtual reality headsets in less than half the normal training time and at a fraction of the cost, according to Stephen Losey of Air Force Times.

The service's inaugural class of Pilot Training Next began in April with 30 students. After four months of training with VR headsets — in place of traditional multi-million dollar simulators — along with artificial intelligence and advanced biometrics, just over a dozen students earned their wings.

The normal training pipeline typically takes about a year.

Officials told Air Force Times the program isn't meant to replace its traditional pilot training program. Still, the results are game-changing: Student pilots can put on an HTC Vive headset that immerses them inside a cockpit for just $1,000 per unit, compared to $4.5 million for a legacy simulator.

The Vive headsets can also be configured to bring the students right into practicing a certain maneuver, or they can be linked up with the other 20 students at the same time so they can train and fly together in virtual reality. The VR sims also use biometrics such as heart monitors and pupil measurement to register whether the students are truly learning — which traditional simulators cannot do.

And instead of spending millions of dollars and doing a complicated reconfiguration of one cockpit to another, it takes “about 10 seconds” for the VR sim to be changed from a T-6 trainer to an F-22 or whatever aircraft is desired, according to an Air Force TV report.

The Air Force can also capture a real student flight and then bring it into the VR simulator, allowing students to retrace their steps and learn where they can improve.